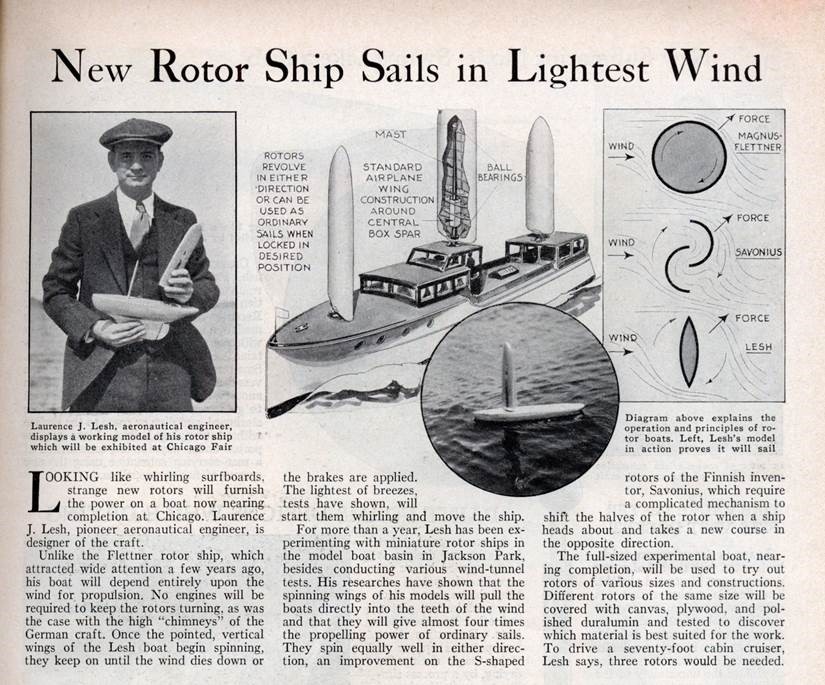 Sulphur dioxide is produced during combustion of fossil fuels and is a toxic atmospheric pollutant. ‘Ultra-low sulphur’ diesel has been available for road vehicles for over a decade. New global pollution rules are due to come into force in 2020, requiring shipping companies to use fuel with significantly lower sulphur content. Shipping diesel can contain up to a 1000 times more sulphur than its domestic equivalent.  However, the cleaner fuel is more expensive than current fuel oils and the alternative exhaust filters, known as ‘scrubbers’, are expensive to install. This has prompted some oil and shipping companies to explore cheaper alternative methods of propelling their vessels.

Royal Dutch Shell and Maersk have teamed up to trial futuristic ‘rotor sails’ made from lightweight carbon composite materials. The ‘revolutionary’ technology uses the ‘Magnus effect’ and is based on the Flettner rotor patented by German engineer Anton Flettner in 1922. It is hoped the rotor sails could save as much as 10% of the vessel’s fuel consumption and, if successful, a trial in 2018 and 2019 could then see rotor sails used on larger ships. When you burn 1,000 gallons an hour, that is some saving.

At a time when OPEC and non-OPEC members are trying to push through oil output cuts to stabilise oil supply and demand, it is a little ironic that an oil company is attempting to harness wind power to reduce its fuel consumption! Nonetheless, it demonstrates the continuing challenge that oil producers face from a shift to a greener world in the longer run, as well as the power of environmental legislation.

Easter is usually quiet, but we’ve had North Korea, the French election, UK snap election and Trump protectionism, and it was only a four-day working week!

Markets are breathing a sigh of relief today. The French election saw Macron and Le Pen make it through to the second round in line with the most likely scenario for the last several weeks and is positive for European markets given their head-to-head polling numbers. The polls have suggested that in the final run-off vote Macron has been consistently 20%-30% ahead of Le Pen. It would take a greater voter shift than Brexit or Trump for Le Pen to win and Macron is the hot favourite right now. However, while in line with market expectations, the French election is yet another political shockwave, as the two mainstream party candidates were eliminated in the first-round vote.

The US naval task force that Donald Trump ordered to sail towards North Korea actually went in the opposite direction! Deliberate deception as a warning for North Korean leader Kim Jong-un, change of plan or simple miscommunication? Brings a whole new meaning to a Trump U-turn! The US is now working closely with China to engage with North Korea.

Donald Trump raised the spectre of protectionism by using a 1962 law allowing the US government to limit steel imports as he continues to deliver on campaign promises to US blue collar workers in America’s heavy manufacturing industries. He called it an ‘historic day for American steel’ but risks increasing tensions with China.

Following comments from US Treasury Secretary Steve Mnuchin that US tax plans could slip into 2018, Donald Trump turned to Twitter again to proclaim ‘Big tax reform and tax reduction will be announced next Wednesday’. How realistic is this and can he deliver?

In the UK, PM Theresa May must have been looking at polling data as she announced a snap general election for June 8th in a bid to strengthen her hand in Brexit talks. Justifying the decision, she said, ‘The country is coming together but Westminster is not’. She blamed the opposition party criticism of her Brexit negotiations as a further factor and is already referring to the rival parties as ‘the coalition of chaos’. The average of recent polls has the Conservative Party at 42% and Labour Party at 27%. The only question would appear to be to what extent pro-European Britons undertake tactical voting for other parties to weaken Theresa May’s hold on power.

Sterling surged to a five-month high of $1.28 on the snap election news on hopes that a bigger Conservative majority would materially reduce the ‘crash risk’ of Brexit negotiations. A bigger majority would strengthen Theresa May’s hand, but does not rule out the chance of hard Brexit. The strong pound in turn hit the FTSE 100 which comprises a high proportion of overseas earners which were also unnerved by escalating tensions between North Korea and the USA. The mining sector also slumped on falling iron ore prices due to concern about a slowing Chinese property market and overcapacity. Together these factors, but particularly Sterling’s recovery, erased the FTSE 100 gain of 2017. The market has however recovered strongly today on the first round French election news.

The chief economist of the International Monetary Fund (IMF) said the global economy ‘could be at a turning point’ with growth picking up from 3.1% in 2016 to 3.5% in 2017.

In the UK, a survey by HIS Markit revealed that cash available to spend by households has fallen to its lowest level in over two years. Total mortgage lending of £21.6bn dropped by 19% in March although the previous year was boosted by the rush to beat the stamp duty rise. The Council of Mortgage Lenders said that while it does not expect any impact from the general election that ‘mortgage lending appears to be in neutral gear’. UK retail sales posted their biggest quarterly fall in seven years in March, which was disappointing even allowing for the timing of Easter.

In Japan, supporters of monetary stimulus will dominate the Bank of Japan after PM Shinzo Abe nominated two members to replace the last ‘hawks’ on its policy board.

Brent oil dipped below $53 on news that US oil production had increased to the highest level since 2015 while President Trump has talked again about deregulating the energy industry.  Against this Saudi Arabia and Oman’s oil ministers said a significant number of OPEC countries would like to see the production cut extended beyond June.

Finally, in the week the snap election was announced, pensioner Brenda of Bristol, who has become an overnight internet sensation, seemed to sum it up nicely when interviewed by a television news reporter. ‘You’re joking? Not another one?’