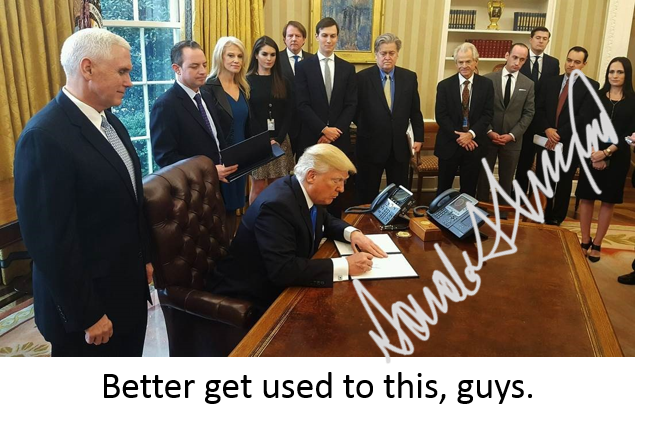 Love him or loathe him, controversial US President, Donald Trump continues to dominate our media.

Trump has been busy issuing executive orders. These are written orders issued by the president to the federal government, which do not require congressional approval. An executive order has to work within the confines of US law and if considered outside of what is acceptable can be subject to a legal review. Congress can also pass a law to override the executive order.

Intriguingly, former president Barack Obama actually signed more executive orders in his first three weeks in office, than Donald Trump. So why has Donald Trump’s executive orders received more coverage? His use of social media, will no doubt have played a significant part. Perhaps it is because the executive orders are not only more varied, but they also appear controversial. The travel ban, is perhaps the most contentious of all.

The new US president has attacked the judge who blocked his travel ban and now a US federal appeals court has rejected the President’s attempt to re-instate it. Trump subsequently tweeted ‘see you in court’, implying a further appeal to the Supreme Court. As Trumps preferred tool of communication, you’d have thought Twitter would be benefitting from the publicity and extra site traffic. Sadly not, as last week Twitter shares fell 17% as a result of a poor trading update.

Running the United States is a far different proposition from being head of his private empire, the Trump Organisation. #trump #trumporder #contentious

Markets continued to consider the broader implications of the new US administration’s protectionist policies on global trade. However, Donald Trump has reportedly supported the ‘one China policy’ while Chinese trade data was positive. Investors are also still unsure if the US President can make good on his promised tax cuts and fiscal stimulus. However, in a meeting with US airline executives he said that there would be a ‘phenomenal tax plan in the next two or three weeks’. A subsequent press conference suggested this could be for both companies and individuals. This helped US equities touch record highs.

However, ‘across the pond’ it was the European bond market that really focused investor’s minds. The spread between French and German 10-year government bonds reached its highest level in more than four years, despite encouraging Eurozone economic news. This reflected concerns about the political situation in France and Germany ahead of elections later this year. It might also reflect the possibility of the end of monetary stimulus by the European Central Bank as we get closer to 2018. An IMF statement regarding Greece may also have added to the uncertainty warning ‘Greece would fail to hit its budget-surplus targets set out under the bailout terms set by its creditors’ suggesting that ‘Grexit’ risk was once again possible. Greek debt was sold off sharply as fears grew that Greece and its lenders will not be able to bridge their differences in time to release the 7bn euros of funding it requires to avoid bankruptcy in July.

Rising risk was reflected in the gold price which touched its highest level since November. In addition, in the UK, the 10-year gilt yield hit a new low for 2017 of under 1.23%.

In the UK, retail sales grew by just 0.1% in January. Home-related purchases grew but clothing sales were lower. Online sales grew by 8% but this was down on the previous double-digit growth rate. However, new car sales hit a 12-year high in January albeit this is traditionally the quietest month. UK manufacturing grew by 2.1% in December, its fastest rate of increase since April, albeit aided by the pharmaceutical sector that can be uneven. There were some signs of wobbling at the Bank of England over the current level of UK interest rates as MPC member Kristin Forbes said the UK economy may soon need an interest rate rise. However, it was subsequently announced that she was stepping down from the MPC!

In Europe, French bond yields spiked to their highest level in 18-months amid concern about the ‘fake jobs’ scandal engulfing Francois Fillon, the one-time presidential front-runner. The market is worried that this could bolster support for the far-right leader Marine Le Pen and increase the risk of a ‘Frexit’ vote. Markets are a little sceptical of polling data after the EU referendum and US election. Nonetheless, in Germany, Martin Schulz, Angela Merkel’s new SDP challenger has taken his party to a slight lead with a 31% share of a national voting poll. The rise in support, just two weeks after he was picked as the SDP leader increases the uncertainty in the run-up to Germany’s election in September.

In the USA, another member of the Fed suggested that ‘March is on the table’ for a possible interest rate rise given GDP and employment data.

China’s trade data, while distorted by the New Year holiday was nonetheless still supportive of more positive trends in global economic activity, with both exports and imports growth ahead of expectations.

Oil initially eased lower on higher US inventories and a report revealing that in 2016, Chinese oil demand grew at its slowest pace in at least three years. However, the oil price steadied after a report from the International Energy Agency which reported 90% compliance by OPEC members to oil output cuts, although it noted Saudi Arabia has cut more than required.

Finally, another sign of how times have changed. In the ‘good old days’ demand for commodities was driven by supply and industrial/consumer demand. These days many commodities are also driven by investor activity. Hedge fund speculators have amassed the biggest ever bet on rising oil prices by building record ‘long positions’ in almost 1 billion barrels of oil. This has no doubt added to inflationary pressures through higher petrol prices. Hedge funds are betting that the OPEC cuts will balance the oil market. However, US shale oil production is picking up. The million-dollar question is, will Donald Trump succeed in his plan to boost US shale oil output?