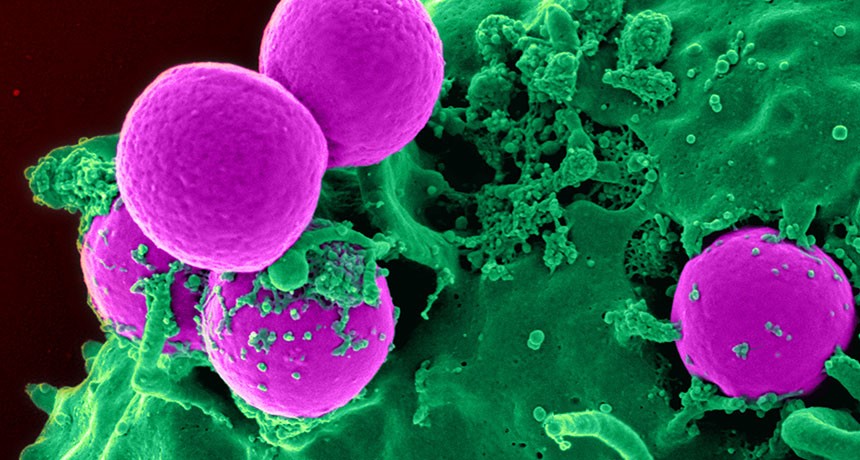 One of the greatest achievements from the last century has been the introduction of antibiotics. However, England’s Chief Medical Officer Dame Sally Davies has re-iterated globally expressed concerns over the catastrophic threat posed from antimicrobial resistance (AMR) to antibiotics. The growth of antibiotic-resistant pathogens now critically limits our ability to curb infectious diseases. Deaths from minor surgery could become routine within 20 years if new antibiotics are not discovered. The last new class of drugs to reach patients was discovered in the 1980’s.

AMR is one of the biggest risks we face and represents a global challenge. However, there is good news from researchers at the University of Tubingen in Germany. They have discovered a new class of antibiotics by analysing the bacterial warfare taking place up people’s noses.  Apparently one of the bugs to invade the nose is Staphylococcus aureus, including the deadly superbug strain MRSA (in the picture). It is found in the noses of about 30% of people. However, those of us with the rival bug Staphylococcus Lugdunensis in our nostrils are less likely to have S. aureus. Scientists have discovered a crucial piece of genetic code to allow them to build a new antibiotic which they have named Lugdunin.

Despite some political risk to the pharmaceutical sector from the US presidential election, the long-term growth fundamentals for the global healthcare industry continue to look compelling. Medical breakthroughs are enabling us to live longer.

However, before we all become too complacent, the next projected cataclysmic meteor strike on earth is predicted to be 2135. (please note that is AD not 9.35pm this evening).

Global markets suffered another bout of risk aversion at the end of last week due to a combination of disappointment with lack of action by the ECB, building US interest rate hike fears and concern that the Bank of Japan won’t do much at its meeting later this month. A North Korean nuclear weapon test and Hilary Clinton’s health appear to have added to market unease.

Treasury yields moved up and in the UK, for example the 10- year gilt is now around 0.85% compared to its recent low of under 0.6%. Globally, ‘bond-proxies’, those safer equities with high yields such as in the utility sector, were in turn sold-off.

A milestone in the world of negative interest rates was reached last week. Both German consumer goods company Henkel, and French pharmaceuticals business Sanofi became the first public companies to sell Eurobonds with a negative yield.

In the UK, Theresa May has distanced herself from her new Brexit secretary’s comment that it was ‘very improbable’ the UK would remain in the single market, exposing a fresh cabinet split over Britain’s future in Europe. Elsewhere, over the previous weekend, Japan published a 15- page memo raising concerns about investment in the UK in the wake of the EU referendum. About 140,000 British workers are employed by Japanese companies with car manufacturing a significant part. However, two leading City institutions revised their economic outlook for the UK post the EU referendum to a lesser -slowdown which would narrowly avoid a technical recession.

Bank of England Governor Mark Carney attended a Treasury Select Committee which included some predictable criticism of the Bank’s perceived pre-EU referendum ‘scaremongering’ which was just as predictably dismissed. He did acknowledge that the post-vote economic slowdown has been less dramatic than feared, partly as a result of its monetary easing actions, estimating a current run rate of Q3 GDP growth of around +0.3%.

In Europe and more specifically in Germany, Chancellor Angela Merkel’s Christian Democratic Party lost more support at the latest regional elections to the anti-immigration Alternative for Germany party. This is likely to place further pressure on the German chancellor ahead of the general election next year and is another sign of the growing protest vote.

European equities were initially underwhelmed by the latest European Central Bank (ECB) policy announcement. The ECB decided not to increase the existing stimulus package, suggesting that it is confident in the effectiveness of the action already taken. A committee has been established to assess the effectiveness of the stimulus package which is currently running at €80bn a month up to March 2017.

In the USA, ISM non-manufacturing data for August dropped sharply, the first really disappointing data point for a while. This may diminish the chances of a US interest rate rise on September 21. However, a member of the US Federal Reserve policy committee said ‘if we want to ensure we remain at full employment, gradual tightening is likely to be appropriate’. TV pictures of Hilary Clinton passing out, having left the 9/11 memorial service early, caused some unease given rival Donald Trump has questioned her health.

According to press reports Saudi Arabia is believed to be reviewing $69bn of spending projects with the aim of cancelling one-third of them, as the lower oil price has hit government finances hard. Probably not good news for those companies and countries that export to the kingdom.

At the G20 meeting Saudi Arabia and Russia pledged to co-operate to stabilise global oil markets but stopped short of announcing any measures to cap oil output. Oil dropped 4% on Friday as part of the global market sell-off.

Finally, for those living in the south-west and of a nervous disposition you may wish to stop reading at this point. The BBC has discovered, after a freedom of information request, that there have been over 130 security breaches at the UK’s nuclear plants in the last five years. This includes locally, at Hinkley Point power station, where the keys were lost!