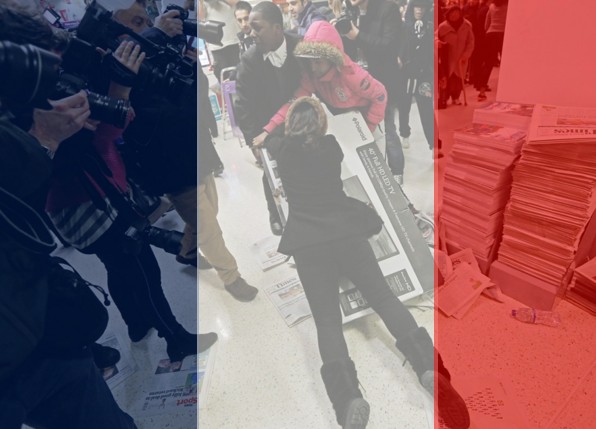 A bleak Friday indeed for democracy with the shocking terror attack on Paris although, in a sign of solidarity and that life goes on, #Parisisaboutlife, is already widely circulating on social media.

‘Black Friday’ has become a retail phenomenon. It has leapt across the pond and has now gone global. Furthermore, is has become the single most important day in the UK retail calendar, surpassing the January sales.

The retail frenzy takes place the day after ‘Thanksgiving’ in the USA which means Black Friday will fall on Friday 27th November. This event first came to the UK five years ago when Amazon introduced the concept but was quickly followed by other US retailers, such as Walmart, the owner of Asda. Last year British consumers spent £810m on Black Friday online purchases alone. That works out at over £9,000 every second! However, in the UK it may have backfired with Asda reported to be not participating in 2015 due to the negative publicity following images of last year’s customer rugby scrum at some stores.

However, ‘Black Friday’ is surpassed by ‘Singles Day’ in China which takes place every year on November 11th. This is a consumer holiday in China and the world’s biggest online shopping day of the year. Last week, on ‘Singles Day’ Chinese consumers spent a staggering £9.5bn in 24 hours with Alibaba against £6bn in 2014. China’s economy is slowing but it would appear Chinese consumers still have their buying boots on.

Globally, retail businesses have had to adopt their business models to cope with the surge in demand from events like ’Black Friday’, ensuring computer systems do not crash and that their supply and logistics chains can handle the volume spike. Which got us thinking. With so much riding on one day’s performance who would want to be a retailer?

The OECD further lowered its global GDP growth forecast again, to 2.9% for 2015 and 3.3% in 2016 highlighting a ‘deeply concerning’ slowdown in trade, particularly with China. At the same time, the Chief Executive of the world’s biggest shipping container company Moeller-Maersk said ‘we see less growth, particularly in developing nations, but perhaps also in Europe, than other people expect in 2015’.

Following the previous week’s US jobs data, the yield on 2-year US Treasury notes rose to a five year high as the futures market continued to price in a 70% chance of a US interest rate hike in December. Yields on lower quality US corporate debt climbed above 5.5%, the highest level since the market rout of September 2013.

By comparison, in Europe there appears to be a growing consensus among ECB council members that the already negative deposit rate could be cut by at least a further 10 basis points. Markets give this a greater chance of happening than a further extension of the ECB’s QE programme. Mr Draghi raised hope of more action in December by saying ‘signs of a sustained turnaround in core inflation have somewhat weakened’. However, in the UK, where the BoE will be following a similar path to the US Fed, the EU referendum debate continues to overshadow the fixed interest market. The 10-year Gilt yield now at a 3-month high of around 2%.

Despite a stellar ‘Singles day’, soft economic data from China impacted a number of markets particularly commodities with copper testing new lows, last seen in 2009 and oil dipping below $45.

In the UK, the British Retail Consortium announced a very slight dip in sales in October, due to food sales. However, consumers appear in good cheer with Barclaycard reporting October spending up 4% on this time last year which should bode well for the forthcoming Black Friday event.

In Europe, Greece appeared on the radar screen once again. Eurozone finance ministers delayed sign off of a €2bn tranche of the €68bn bail-out package, following a stand-off with Athens over foreclosure protections for homeowners. Election tension surfaced in Portugal as a the left wing opposition alliance forced out the current centre-right government. The shift to left wing anti-austerity or right wing anti-immigration parties is likely to be a recurring theme within Europe in 2016. The Eurozone Q3 GDP data releases were disappointing against expectations, with the region’s growth at just +0.3% keeping pressure on ECB President Draghi to remain supportive.

The Japanese economy slipped back into recession as GDP declined by 0.8% in Q3 with ongoing weak business investment offsetting personal consumption and exports.

Weak Chinese trade numbers focused interest upon the extent of economic slowdown, with one key domestic policy-maker suggesting that 6.5% GDP growth could be the new target for the 2016-2020 period. In the meantime, headline inflation slowed to 1.3% but PPI numbers remained deep in deflationary territory at minus 6%. Further stimulus appears likely. China also released a raft of economic data including industrial production, investment and retail sales. Basically this told a story consistent with gentle weakening, but also a gentle re-balancing from manufacturing towards household consumption.

Oil initially picked up on demand/supply news before drifting near to a 3-month low on Chinese economic data. However, US drilling activity continued to drop. In addition, the Saudi Arabian oil minister also suggested that up to $200bn of investments in energy have been cancelled so far this year which may help restore the current demand/supply imbalance. While US shale production is declining there is still believed to be over 100million barrels of oil being held on tankers at sea. In addition, OPEC confirmed that inventories of oil in advanced economies were more than 210million barrels above the five year average, outstripping the build-up in 2009. The International Energy Agency added to woes by commenting that the world oil stockpile stood at 3billion barrels and the glut could last into next year.

In a sign of the damage that low oil prices are inflicting on its public finances, Saudi Arabia is to tap international bond markets for the first time.

In summary, certain sectors of the market such as resources are likely to remain volatile and there are plenty of profit warnings. For example, aero-engine group Rolls-Royce tumbled more than 20% after its fifth profit warning in 20 months. As we approach the close of 2015, investors will no doubt be studying company trading updates, over the next few weeks, even more carefully for clues to the 2016 earnings outlook. However, it is clear that some companies have no real feel for their customers spending plans next year. Not surprisingly we have endeavoured to focus on investments with good earning visibility.