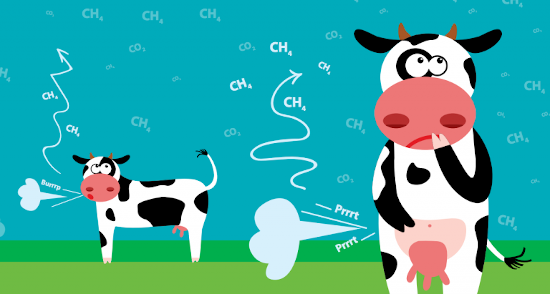 New Zealand has unveiled a plan to tax sheep and cattle due to them burping methane gas. This will make it the first country in the world to charge farmers for their animal’s emissions.

The country is home to just 5 million people, but has 10 million cows and 26 million sheep.  Around half of New Zealand’s total greenhouse gas emissions come from agriculture, mainly methane. Under the proposal, farmers will have to pay for their livestock gas emissions from 2025. The plan also includes incentives for farmers who reduce emissions through feed additives and plant trees to offset emissions.

According to the National Oceanic and Atmospheric Administration, global emissions of methane surged by a record amount in 2021.

Methane is the second most common greenhouse gas after carbon dioxide (CO2). However, it has a far more potent warming effect. Over a 100-year period it is estimated to be about thirty-times as warming as CO2. Around 40% of methane gas comes from natural sources such as wetlands. However, the bigger share now comes from a range of human activities, ranging from agriculture to rubbish tips. Since 2008, there has been a big spike in methane gas emissions and besides agriculture, researchers believe the boom in fracking for gas in parts of the US could be responsible.

ESG investors managing $14 trillion of assets have urged the United Nations to create a global plan to make the agricultural sector more sustainable. At COP26, the US and EU agreed to cut methane gas emissions by 30% by 2030. More than 100 countries, including New Zealand, have signed up to the initiative.

I always thought that amongst the most dangerous animals in the world for mankind were the mosquito, the box jellyfish, the funnel web spider, Indian Cobra and hippopotamus. Looks as if we need to add cows and sheep to this list – excuse me!

Global markets remained volatile in the wake of the recent ‘hot’ US inflation numbers and more aggressive pace of interest rate hikes by the Federal Reserve (Fed). Central banks have a lot to answer for!

Sterling hovered around $1.20, mainly reflecting the bigger interest rate hike from the US Fed compared to that from the Bank of England. Weak Sterling is not helpful for UK imports such as fuel, but it is for quoted companies that are exporters or have significant overseas earnings. Increased risk aversion on higher interest rates has led to a ‘bear market’ in UK mid-cap companies, with over a 20% correction since their early January 2022 peak. The mid-cap index is more UK focused whereas the FTSE 100 is more globally diversified and includes the major oil producers, so have been more resilient with a decline of about 4%. However, the recent sell-off and weak Sterling has driven heightened interest from overseas and private equity buyers in UK companies. There have been 14 proposed and announced bids for UK mid-cap companies in the past six weeks, with a value of over £21bn.

The faster pace of Fed interest rate hikes also created carnage in cryptos, with Bitcoin falling 20%. Meanwhile, bond yields have continued to rise with the US 2-year Treasury at a 15 -year high, while the 10-year is at its highest since 2011. Peripheral bond markets have taken a pasting – Italy’s 10-year bond yield climbed above 4% for the first time since 2014 before falling back on reassurance from the European Central Bank.

The war of attrition continues in Ukraine. Russia appears to be tightening its grip on the Donbas and is now in control of Severodonetsk. Ukraine has appealed for more advanced weapons and NATO is discussing more military assistance, but will it come in time to prevent Russia overrunning the entire Donbas region? There still appears to be no end in sight to the fighting and bombardment.

In the UK, two straight months of contractions in GDP will intensify fears of a recession, although the miss in April’s data of -0.3% on the previous month did partly reflect the wind down of the Government’s Test & Trace programme. April GDP would have been +0.1% without this factor. The impact of the squeeze on household spending should become clearer through the Summer. The Bank of England (BoE) increased the interest rate by 0.25% to 1.25% -the highest level since early 2009. Three of the nine committee members voted for an even bigger rise of 0.5%. The BoE expects the economy to be weaker immediately with a fall in this quarter, while inflation is now expected to be even higher, moving above 11% in the Autumn.

The European Central Bank (ECB) confirmed it was working on a crisis tool to deal with concerns about fragmentation in EU bond markets and Italian bonds.

The US Federal Reserve (Fed), in line with its recent pre-meeting guidance, raised interest rates by 0.75% – the largest increase since 1994. Fed Chair Jerome Powell suggested that a similar move is likely at the next meeting. Markets took some comfort from the fact that rate hikes of this scale are not expected to be a common occurrence. The benchmark fund rate is expected to rise to 3.4% by the end of 2022 and 3.8% by the end of 2023. Inflation is forecast to be 5.2% at the end of 2022 but to drop back to 2.6% by the end of 2023. The real question is what will the interest rate hikes do to the US economy? The Fed has suggested that ‘some pain’ would be the trade-off in dealing with stubbornly high inflation. Economic growth forecasts have been cut to 1.7% in 2022 and 1.9% in 2023. Delivering a ‘soft landing’ amidst this front-end loaded interest rate path will be no easy feat. Will the Fed need to loosen policy next year in the face of a weaker US economy?

China’s factory output and retail sales remained weak in May reflecting lockdown restrictions, albeit activity suggested a modest pick-up from a slump in April. However, Chinese equities in Shanghai touched a three-month high on hopes of further policy support.

Brent oil spiked up to $124 before closing the week below $114, as hopes of further Chinese economic stimulus measures were outweighed by the deteriorating growth outlook elsewhere. Meanwhile, the IEA said it believes world oil supply will struggle to meet demand in 2023.

Finally, talking of gas. CF Fertilisers is closing one of the UK’s largest ammonia plants near Chester, due to higher energy prices. This leaves just its Billingham facility which has so far received government support. This is because CO2 is a key by-product. This means that a wide range of UK industry from meat packing to drinks is going to be reliant on just one plant for CO2. Manufacturers always prefer at least two sources of supply should anything go wrong. The UK’s CO2 supply has just become more precarious. More trouble for Boris with the UK economy losing fizz?