Burying your head in the sand 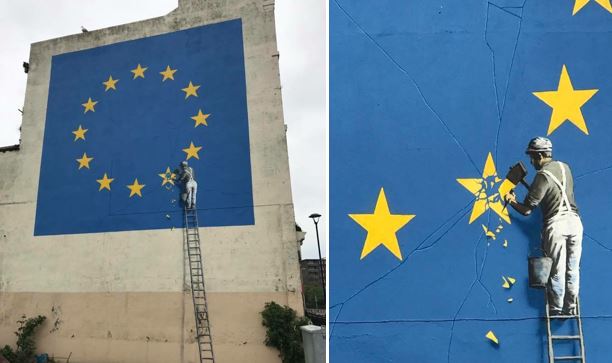 A historic weekend in France. Emmanuel Macron is their youngest leader since Napoleon. Local lad and renowned artist #Banksy, appears to have got the current political tone spot on, with his latest work on display in Dover.

Land makes up 29% of the earth’s surface, but of this about 33% is desert. Why is there a shortage of sand when it seems so abundant? Well, desert sand is too smooth so cannot be used for commercial purposes. In addition, although sand is easily the most mined material in the world, it is relatively cheap and so uneconomic to transport across long distances. The proximity of sand relative to construction markets is key.

Demand for sand is high, driven by global construction activity. Not surprisingly, China is the biggest consumer of sand accounting for an estimated 50% of world demand. Demand is likely to remain strong in the long-term as the United Nations Environment Programme (UNEP) estimates that by 2030 there could be 40 ‘mega-cities’ with more than 10m inhabitants. This will require massive infrastructure investment and sand!

Unfortunately, global warming has added to the problem with rising sea levels requiring construction of sea defences using sand. Some countries have also used sand in land reclamation projects. Some dredging activity can also thin coastlines and impact the capacity of beaches to absorb stormy weather.  The UNEP is concerned that in Morocco and the Caribbean thieves are stripping beaches bare.

At a time when mainstream European politics appears to have turned a corner, we need to be vigilant not to be caught sleepwalking into Brexit. With France now seemingly embarking on the exact opposite path to the UK, it will be very interesting to monitor the fortunes of the two countries in the coming years.

With the French election behind us, markets are left to ponder other challenges over the Summer including UK election and Brexit talks, North Korea tensions, US interest rate policy, Trump’s ability to deliver on economic growth plans, possible further credit-tightening from the Chinese authorities and an OPEC meeting to decide production levels.

Theresa May was out on the road election campaigning during which, when interviewed about Brexit, promised to be a ‘bloody difficult woman’ in talks. Meanwhile, driven by Germany and France, the EU has increased Britain’s Brexit bill to an upfront gross payment of €100bn. This is to include post-Brexit farm payments and EU administration fees in 2019 and 2020. Brexit Secretary David Davis responded by saying the UK would pay what was legally due and not just what the EU wants.  Theresa May went on to say ‘we continue to believe that no deal is better for Britain than a bad deal, but we want a deal’.

China welcomed Donald Trump’s statement that he would be ‘honoured’ to meet Kim Jong Un under the right circumstances amid soaring tensions over North Korea’s nuclear ambitions.

In the UK, UK manufacturing activity jumped to a three-year high in March as Sterling weakness helped manufacturing companies take advantage of a pick-up in global economic activity. UK construction picked-up to a four-month high in April. Mortgage approvals fell for the second month in a row despite lenders stepping up their offers to borrowers.

In Europe, centrist candidate Emmanuel Macron becomes the youngest French leader since Napoleon winning two thirds of the vote, building on the trend of recent European elections of the underperformance of nationalist candidates, relative to expectations.  This also appears to be impacting the Italian populist party (5 Star Movement), who have suffered from increased support for the mainstream Democratic Party, and bodes well for the upcoming general election which must be held by May 2018.

Greece agreed a deal with creditors on reforms required for the country to receive the next tranche of funds from its €68bn bailout programme. The first estimate of Eurozone growth in Q1 2017 was +0.5%.

In the USA, there were more signs that the US economy has started 2017 on a weaker footing than expected. Following, a softer manufacturing survey, consumers also appear cautious with car sales in April disappointing despite the strong incentives offered by car dealers. The Federal Reserve said the recent slowdown in US growth was likely to prove temporary as it stayed on course for a further increase in short-term interest rates as soon as next month. Positive service sector activity data driven by stronger business activity and a pick-up in orders provides some optimism for the second half of 2017. Friday’s monthly employment data was pleasing and exceeded expectations, it also saw the rate of unemployment reach the lowest level since May 2007.

In China, the benchmark seven-day repo rate, a key money-market rate matched a two-year high after the central bank drained cash from the banking system as part of an effort to reign in financial speculation by squeezing liquidity.

Oil fell to a five-month low of under $48 ahead of the next OPEC meeting on May 25th which based on some member’s comments may see an extension of production quotas as US shale output continues to build.

Copper suffered its biggest-one day decline since 2015 on higher stockpile data and developments in China.

And finally, according to Legal & General, the ‘bank of Mum and Dad’ or #BOMAD, is now the tenth biggest UK mortgage lender. It estimates parents have been involved in over 25% of all UK property transactions, lending £6.5bn.  Apparently, parents in the South West of England are the most generous, providing c.£30,000 of financial support per transaction. Food for thought.