Covid-19 and extended lockdowns have been the nail in the coffin for many traditional high street department and clothing stores. Consumers have in many cases been forced to migrate in ever increasing numbers to online shopping and home delivery or ‘click and collect’ offerings. This rapid structural change is reflected in the demise of the likes of Debenhams and the Arcadia empire of brands.

However, this is not the end of these names as online retailer Boohoo is buying Debenhams while ASOS is buying the Top Shop and Miss Selfridge brands for £265m. In the case of Boohoo, it is only buying the brand for £55m and all of Debenhams stores will close and some 12,000 jobs will be lost. Boohoo intends to relaunch Debenham’s online platform which has 300million website visits a year and makes it one of the top 10 retail websites by traffic in the UK. Subsequently, Boohoo has also bought the Dorothy Perkins, Wallis and Burton brands from the administrator of Arcadia for £25.2m. The deal includes the brands and online businesses, but again not the 214 shops or nearly 2,500 employees.

However, some of the growth in online shopping comes with risk. The boom in online shopping has promoted the use of ‘buy now, pay’ later (BNPL) finance. The has proven particularly popular with young millennials. This form of financing has grown fourfold in 2020 and is worth an estimated £2.7bn, with 5 million people using these products since the beginning of the coronavirus pandemic. Firms such as Klarna and Clearpay are to now become regulated and fall under the scope of the Financial Conduct Authority (FCA).

Online retailing may also be a target of Chancellor Rishi Sunak as he looks to balance the UK’s finances. Tesco, along with other retailers has called for a 1% sales tax to be levied on online competitors such as Amazon to provide a ‘level playing field.’

Meanwhile, yet another sign of changing times due to Covid-19. It has been less than a year since the limit on a single payment using contactless technology increased from £30 to £45. The FCA is now considering increasing this to £100. Who said ‘cash is king? ‘The king is dead! Long live the king!’

The pendulum swung away from the Reddit/Robinhood dealing mania and back towards vaccine news, US fiscal stimulus and encouraging economic data, particularly manufacturing.

Door -to-door testing for the South African variant of Covid-19 started in parts of England after cases were found with no known links to travel or previous cases. Sage warned Boris Johnson over the South African variant weeks ago and he was reported to have over-ruled a request to close the border. The Kent variant of Covid-19 is also believed to have mutated which may reduce vaccine effectiveness although the current ones are expected to still work. Some cases of the new strain, E484K have been identified in Bristol and Liverpool.

The vaccination programme continues to roll out with over 12m now having received a jab. The UK’s progress on vaccination relative to the EU’s approach saw Sterling hit an eight-month high against the Euro, although that does create a headwind for UK exporters and some UK equities.

There was also encouraging news with results that show that the Oxford-AstraZeneca vaccine may reduce the spread of Covid-19.  The results of the study have not been formally published but as well as showing an effect on transmission also found the vaccine offered 76% efficacy from a single dose for three months. This would, if officially validated, support the government strategy of giving as many people as possible the first dose and delaying the second for about 12 weeks. However, this encouraging news was tempered by early trials from Oxford/Astra Zeneca that suggest its vaccine only offers ‘minimal protection’ against the South African variant.  Scientists are now working towards tweaking the vaccine to address this by the autumn. In the meantime, South Africa has put the roll out of the vaccine on hold as 90% of new cases are the new Covid-19 variant.

In another study, using blood and saliva samples by UK Biobank, suggests 88% of those tested still have Covid-19 anti-bodies six months after infection.  Elsewhere, India believes up to 300million people across the country may have been infected with Covid-19 but that there were signs of ‘herd immunity’ in a number of cities.

In the UK, manufacturing activity remained in expansion territory but was a three-month low with new orders hit by the latest lockdown. The activity indicator for the services sector was clobbered by the latest lockdown although nowhere near as hard as last April. The Bank of England (BoE) did not change interest rates or QE but did reverse its previous view on the UK economy which it now expects to contract by about 4% in the first quarter due to lockdown but does expect economic growth to recover rapidly in 2021.  The BoE is forecasting growth of 5% for 2021 -so a big second half bounce indeed with growth of 7.25% pencilled in for 2022. The household savings ratio is seen as supporting and offering upside to growth estimates. The other main takeaway from the BoE deliberations was that negative interest rates in the UK remain a distant and extremely unlikely prospect (but banks should prepare just in case they are needed!).

In Europe, manufacturing activity recorded a seventh straight month of expansion in January. The EU put on a brave face, defending its troubled vaccination programme and insisted that renewed pledges of vaccine deliveries would make up for a production shortfall. In Italy, investors welcomed the return of Mario Draghi, former President of the European Central Bank as an appointed Prime Minister which looks a more palatable option for markets than another election.

In the US, manufacturing activity hit a record high in January with an acceleration in new orders. Meanwhile, President Joe Biden has accelerated his push to win Congressional approval for his $1.9trillion stimulus package after it cleared a key Senate hurdle. However, as a sign of how challenging a task this remains, the Senate win required Vice President Kamala Harris to cast the tie-breaking vote.

China’s New Year break is almost here so it will be interesting to see what they do for that although the authorities are clamping down on migrant workers travelling home from major cities after recent small Covid-19 outbreaks. Manufacturing activity slowed in China in January but marked the eleventh consecutive month of output growth. China’s Caixin activity survey showed that growth slowed to a nine-month low in January.

Brent oil touched a one -year high of $60 on the back of improving market fundamentals and OPEC+ meeting.

Finally, Tesla has been one of the global stock market stars but one American analyst has challenged the source of profitability. In 2020, Tesla posted its first full year of net income but not due to sales of cars. Eleven US states require car manufacturers to sell a certain percentage of zero-emission vehicles by 2025. If they can’t, they have to but regulatory credits from one that meets those requirements such as Tesla. The analyst points out that in 2020 Tesla received $1.6bn of regulatory credits compared to car sales of $721m! Sounds fine as long as the regulatory credit system lasts. 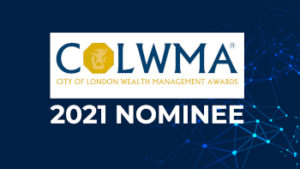 A reminder that voting closes on the 12th of February for the City of London Wealth Management Awards.
If you have not yet cast your vote and wish to show your support we would greatly appreciate a moment of your time.
Please click here to vote.
A reminder that we have been nominated for the following categories: