Can we Survive Without Amazon? 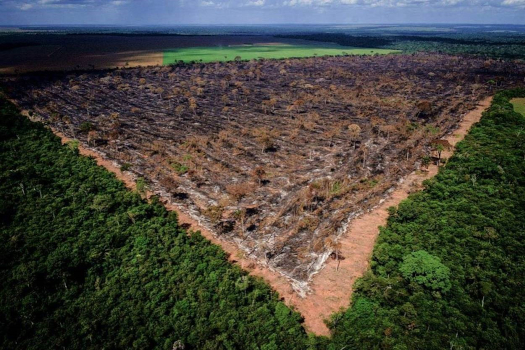 By acting as a carbon sink, the Amazon has played a pivotal role in slowing down the pace of global warming. However, Brazil’s space agency has recently been reported that deforestation of the Amazon rainforest has surged to its highest level since 2008.

At one time it was said that an area of forest the size of a football pitch was being cleared every minute, but judging by the fires detected from space this could be an under-estimate. Scientists believe the rate of deforestation has accelerated under Brazilian President Jair Bolsonaro who has encouraged mining and agriculture – big earners for Brazil.

While investors and companies have become more environmentally (ESG) aware and compliant what we can do when a national leader adopts such a strategy?

While the Amazon forest suffers from logging and farming disruption, the other Amazon, the US online giant goes from strength-to-strength and has been one of the clear winners in a Covid-19 lockdown world.

Amazon continues to act as a serious disrupter to traditional business models and the latest sector to suffer is the healthcare industry and specifically pharmacies in the UK. Amazon launched an online pharmacy in the US in November and is now rolling this out in the UK. While many small UK pharmacies offer products online, they rely on Royal Mail for delivery. The Christmas online ordering surge and Covid-19 pushed Royal Mail to the limit. Whilst consumers should see the benefit, the worry for UK pharmacies is that Amazon not only has logistics on its side, but its sheer size is an advantage at the negotiating table on pricing.

Amazon’s business model continues to resemble a bulldozer in the rain forest ploughing relentlessly forward and disrupting everything. While many have sleepless nights worrying about the Amazon rainforest, the owners of many businesses no doubt fret about the appearance of Amazon in their market. However, Amazon founder Geoff Bezos has also seen a sizeable chunk of his assets disappear paying out $38bn in a divorce settlement.

With everyone in lockdown once again, the reality is that we probably cannot survive without either of the Amazons!

Vaccine roll-out optimism was countered by the short-term uncertainty from further lockdown measures particularly across Europe, as well as grim record death tolls in a number of countries including the UK, Germany and the US. German Chancellor Angela Merkel warned of another 8-10 weeks of ‘tough measures’ to defeat Covid-19 while Italy has extended its state of emergency to the end of April. The UK government has banned flights from South America and Portugal amid concern that another highly infectious variant of Covid-19 has emerged in Brazil.

More disturbing is the news that China is battling its biggest Covid-19 outbreak in months with 22million people being placed in quarantine around Hebei, north of Beijing. China may need to take action to prevent travel as the Lunar New Year holiday approaches in February. Meanwhile, call me an old cynic but the Wuhan Institute of Virology has deleted some 300 online records of its experiments on bat viruses just as the WHO team arrive in the city to start their investigation into the Covid-19 outbreak! Meanwhile, US intelligence claims Chinese laboratory workers in Wuhan fell ill with symptoms similar to Covid-19 months before the outbreak was recognised officially.

The UK vaccination programme has now reached 2.95million and some 5 million over 70’s will start to receive the jab. The UK government appears confident that all adults will have been offered a jab by September.

The UK’s relations with China appear to have deteriorated last week following Boris Johnson’s suggestions that Covid-19 could have spread from the Chinese practice of grinding pangolins. Foreign Secretary Dominic Raab also blasted China for its harrowing human rights abuse against the Uighur minority. We know China holds a grudge – just look at what they have done to Australian trade. Wait for the pay-back! Meanwhile, US and China relations may be helped by the US Federal Reserve blocking a move by the Pentagon to force US investors to sell their holdings in Chinese technology companies such as Alibaba and Tencent.

In the UK, Chancellor Rishi Sunak warned that the economy will ‘get worse before it gets better’ which came as no surprise to investors given the latest lockdown. Meanwhile, Sterling moved above $1.36 after the governor of the Bank of England Andrew Bailey downplayed the use of negative interest rates.

In Europe, PM Giuseppe Conte’s government was plunged into crisis after two cabinet ministers from a junior partner quit taking the ruling coalition to the brink of collapse. Despite a slow start to the vaccination roll-out programme in Europe, Christine Lagarde, President of the European Central Bank has kept the economic growth forecast for the eurozone unchanged for 2021 at 3.9% but did sound a note of caution should lockdown measures be extended beyond the end of March.

In the US, Donald Trump became the first US president in history to be impeached twice. However, the Senate will not vote before 20th January when Joe Biden assumes the presidency. In the meantime, the FBI have warned of possible armed protests being held across the country and there are now more American soldiers in Washington than in Iraq and Afghanistan!

US investors continue to focus upon Joe Biden’s support package for the US economy. He is planning a $1.9trillion stimulus package with $465bn direct stimulus to households with cheques of up to $1,400, a $350bn extension of emergency unemployment benefits until September and $350bn of state and local government funding. However, the yield on 10-year US Treasury stock climbed to 1.1% in expectation of even higher government debt. The US Federal Reserve (Fed) published its ‘beige book’ which suggested that most regions of the country have reported a modest increase in economic activity with manufacturing remaining on an upward trajectory. The Fed also suggested the US could see a boost of ‘exuberant spending’ after the pandemic that could cause price increases, but may not lead to a spike in inflation. Fed Chair Jerome Powell also played down talk that the tapering of asset purchases may begin earlier than expected – ‘now is not the time to be talking of exit’.

Despite more emergency Covid-19 lockdowns in Japan, investors continue to focus upon global economic recovery with the NIKKEI touching a new 30-year high.

China’s economy grew by 6.4% in the fourth quarter of 2020 with growth of 2.3% for the year as a whole. The year-end growth was driven by a recovery in industrial production which was up by 7.6% in the fourth quarter while retail sales increased by 4.6%. China’s trade surplus hit its highest ever monthly level in December and exports grew by 18%. China was ‘first in and first out’ of the pandemic and the latest data adds to the buoyant sentiment around the Chinese economy. However, headwinds remain with the return of lockdown measures in parts of the country and the challenge of New Year travel.

Brent oil held at $55 after Saudi Arabia sent a strong signal to the market with its February official selling prices surpassing market expectations ahead of its production cut of 1million barrels a day.

Finally, even with a Brexit deal there was likely to be some inevitable short-term disruption for the road haulage sector due to red tape. However, some hauliers have encountered orange tape as Dutch customs officials have confiscated ham sandwiches and other foods from British lorry drivers. ‘Rules is rules’ or very hungry customs officers? While on the subject of Brexit, let’s not forget the UK’s Fishing Minister, Victoria Prentis who has admitted not reading the final Brexit trade deal as she was busy organising a Nativity trail at Christmas!