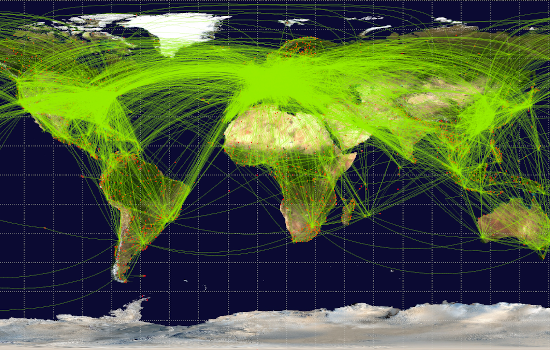 Flygskam – ‘flight shame’ appears to be spreading. High-profile environmental campaigns led by Swedish school girl Greta Thunberg, has helped push the climate crisis up the political agenda.  Separately, a report out today commissioned by the government’s climate change adviser, the Committee on Climate Change, has called for an end to ‘air miles’ incentives for frequent flyers.

Airline CO2 emissions have risen up to 70% faster than predicted. According to the International Council on Clean Transport, which exposed the Volkswagen diesel gate scandal, airline carbon dioxide emissions have increased by 32% between 2013 and 2018. Global aviation is estimated to account for more than 2% of global CO2 emissions.

Global air travel has grown by between 4% and 5% a year and 2019 is forecast to be yet another record-breaking year for passenger numbers. However, a recent survey by a London research house suggested one in five people had cut the number of flights over the last year because of the impact on the climate. If more passengers change their flying habits, could the long-term growth rate for the aviation industry, which is a major employer, change?

In the meantime, the environmental campaigns continue with eco-activists Extinction Rebellion undertaking two weeks of protests in London. Activists have caused disruption around the City, including briefly shutting down London City Airport. A change in our flying habits would be good news for the UK holiday trade and economy with the likelihood of more staycations.

A crucial week for Boris with MPs sitting on a Saturday. Is there a chink of light at the end of the Brexit tunnel? Or, will there be an Extension Rebellion?

Trade talks and Brexit continued to dominate markets. After days of contradictory statements, the week ended on a positive note for both but particularly so for Brexit with an extraordinary near- 5% surge in unloved, UK mid-cap 250 equities on hopes of a last-minute deal. Sterling also rallied towards $1.26.

Ahead of trade talks, the US Commerce Department blacklisted a further 28 Chinese government agencies and technology companies and also imposed visa restrictions on a number of Chinese officials for their alleged involvement in abuses against ethnic Uighurs in China’s Xinjiang province. However, following two days of trade talks in Washington, President Trump said negotiators had reached a ‘phase one deal’ that would include increased Chinese purchases of US agricultural goods and address financial services, as well as technology theft. The US will suspend the next scheduled tariff hike on Chinese imports. Trump said he might sign the deal alongside President Xi at a UN summit in December. However, whilst an encouraging development, details have yet to be confirmed, a process that could take several weeks.

Elsewhere, the US and Japan signed an agricultural trade deal but this appears more limited than the previous Trans-Pacific partnership and excludes cars and manufacturing equipment. The IMF warned that trade disputes could shave 0.8% off global economic growth in 2020.

Turning to Brexit, last week started on a downbeat note as Downing Street sources said that German Chancellor Angela Merkel told PM Boris Johnson that there will be a no deal Brexit unless Northern Ireland is in the customs union ‘forever’. Boris Johnson responded by saying a deal is ‘virtually impossible’. However, the EU chief negotiator Michel Barnier said he believed ‘with goodwill’ on both sides there could be an agreement in the run-up to the EU summit. However, at the end of last week Boris Johnson met Irish leader Leo Varadkar and both said they can ‘see a pathway to a possible deal’. Sterling rallied towards $1.26 on the news. However, over the weekend hopes of a last-minute deal were tempered as Michel Barnier described talks as ‘difficult’. Meanwhile, Parliament is to meet on Saturday 19th October, after the EU summit, to discuss the UK’s future. Both the DUP and Brexiteers are reported to be unhappy with the EU’s request for more concessions from the UK.

In the UK, retail sales fell in September according to the British Retail Consortium with the weakest performance since records began in 1995. However, Barclaycard reported a modest rise in transactions in September reflecting healthy spending on digital content and subscriptions such as Netflix and Spotify. Sounds like the structural shift by consumers from high street to online shows no sign of abating. Meanwhile the Royal Institute of Chartered Surveyors said that fewer houses are being put up for sale while there has been a further dip in buyer enquiries in response to the ‘endless wrangling about Brexit’.

In the USA, Jerome Powell, Chair of the Federal Reserve (Fed) said that purchases of short-term Treasury securities would resume to avoid a recurrence of the unexpected strains experienced recently in the repo market (overnight bank liquidity). He did however, emphasise that this is not a re-start of QE stimulus. The latest Fed minutes included little in the way of guidance on interest rates but confirmed there are divisions across the committee reflecting the elevated uncertainty around both the domestic and global economy. The futures market is still suggesting a 0.25% interest rate cut in October.

In China, activity in the service sector was lower than expected and dipped to a seven-month low.

Brent oil edged up to $59 on news of progress on US and China trade talks and an attack on an Iranian oil tanker. In addition, Turkey launched a military campaign against Kurdish fighters in northeast Syria. Analysts said the attacks could impact the economy of the oil-producing Kurdistan region of Iraq.

Finally, the Bank of England is to introduce a new £20 note into circulation in February featuring artist JMW Turner. The new design will feature two see-through windows and a metallic hologram. Did you know that the current £20 note is the most forged? Apparently, so far in 2019, 88% of forged banknotes have been £20 notes.