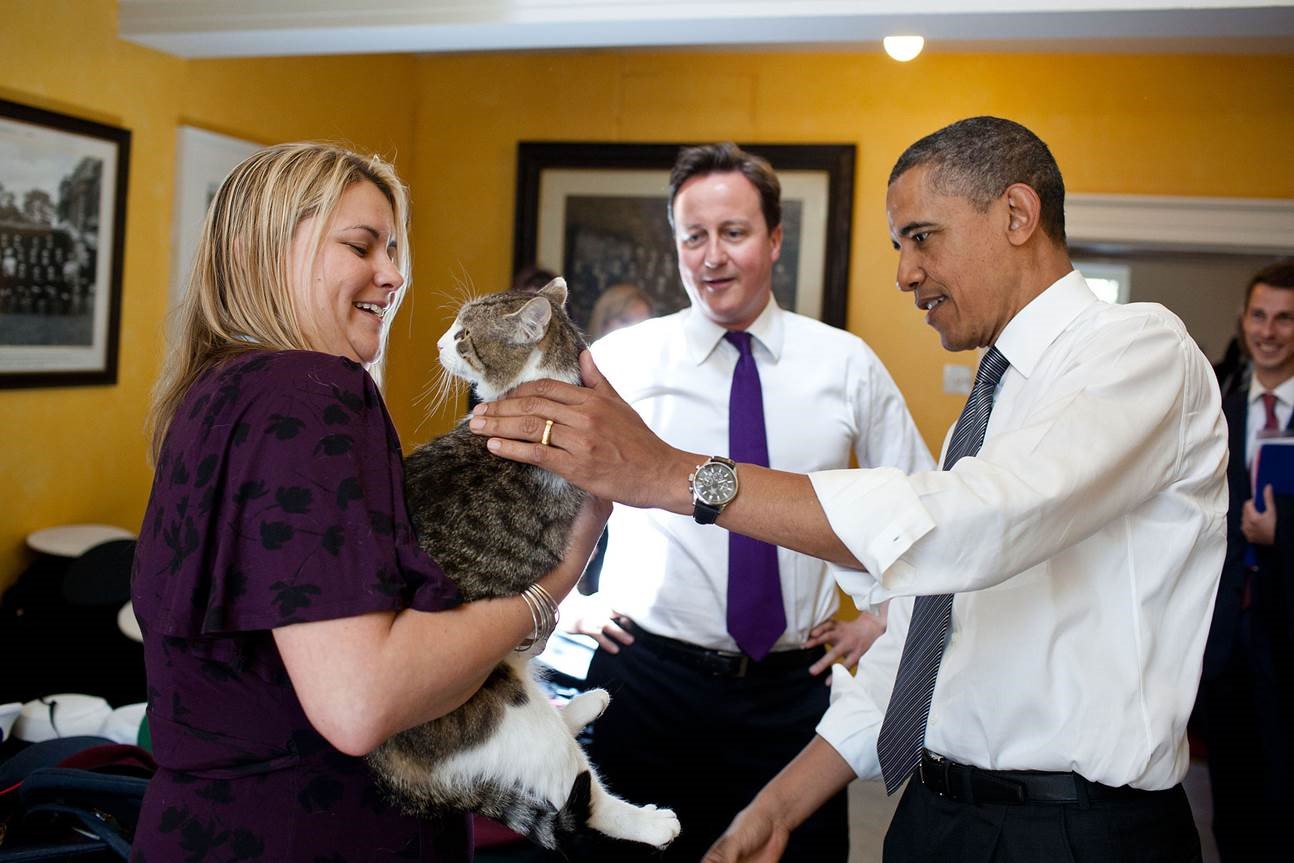 After one of the most ruthless Cabinet ‘reshuffles’ ever witnessed, one member of 10 Downing Street was at least breathing sigh of relief last week. Chief Mouser to the Cabinet, Larry the cat is to remain at number 10.

However our new PM has already made some interesting new cabinet appointments with the bold announcement of Boris Johnson as Foreign Secretary, grabbing the headlines. How many countries has straight talking Boris previously upset? In a bizarre quirk of fate, over the weekend one of Boris’ first jobs was to call his Turkish counterpart Mevlut Cavusoglu. We would love to have been a fly on the wall when Boris called, given his previous prize winning limerick about Turkey’s president – ‘There was a young fellow from Ankara’. Last night, fate also intervened as Boris Johnson’s plane, en route to Brussels, was forced to make an emergency landing at Luton airport, with ‘technical difficulties’. For Boris, hopefully leaving the EU isn’t going to be as eventful as leaving the UK!

The signs of UK political stability and no interest rate cut helped Sterling recover to $1.34. However, the fall in Sterling since the Brexit result makes UK strategic assets cheaper to overseas buyers. Is there a for sale sign hanging over the UK? China’s wealthiest man, is acquiring the Odeon Cinema chain for £921m, while South African retailer Steinhoff is acquiring Poundland for £597m. In the biggest deal of 2016 so far, Japanese SoftBank has today announced it is acquiring FTSE 100 constituent technology company ARM, for £24.3bn. Will we be hearing more takeover news like this in the months ahead?

The removal of the political vacuum in the UK, some re-assuring comments about the Italian bank crisis and Chinese Q2 GDP data helped sentiment. However, the main prop for markets remain the hopes of more central bank stimulus, with the Bank of England and Bank of Japan in the spotlight and the view that other central banks will keep interest rates lower for longer. Whether a sign of extreme risk aversion or the distorting effects of QE, Germany set a new record in financial markets, becoming the first Eurozone country to sell a 10 year bond with a negative yield in a government auction.

All eyes on the new UK PM. This could mean that the next few days and weeks might tell us a lot about economic policy going forward. Will a new PM and Brexit be the opportunity for one country to embark on a major policy shift in a world where economic policy is in danger of going slowly down the same cul-de-sac? Two interesting comments from Theresa May so far. Brexit means Brexit and that Article 50 will not be triggered this year.

It appears former Brexit campaigners will shoulder the burden of leaving the EU with David Davis appointed as Brexit minister and Liam Fox as International Trade minister. George Osborne, not surprisingly becomes the latest Brexit political casualty to be replaced as Chancellor by Philip Hammond who, as a low-key fiscal hawk would not appear a natural fit with the new PM’s plan to relax austerity. Finally, Justice Secretary Michael Gove also has no place in the new government.

Philip Hammond has said he does not anticipate the need for an emergency budget later this year. However, he and Mark Carney will no doubt spend the summer thrashing out a co-ordinated plan to restore confidence to households and businesses.

While many expected action from The Bank of England last week, it left the UK interest rate at 0.5% and there was no extension of QE. However, the BoE members probably want to see some more post Brexit vote economic data over the next few weeks before taking further action having already provided liquidity to the banking sector. An interest rate cut looks likely on August 4th as ‘most members of the committee expect monetary policy to be loosened in August’ and the BoE seems to be prepping the market for more than just a rate cut.

In Dublin on Tuesday officials from the Central Statistics Office told a stunned room full of economists and reporters the Irish economy grew 26 percent in 2015. Previously, they had estimated growth of 7.8 percent. The announcement was dubbed leprechaun economics and was mainly caused by inversions during the period – U.S. companies re-domiciling into Ireland, thereby seeking to access the 12.5% corporation tax rate.

In Europe, the IMF weighed into the Italian bank crisis saying that concerns related to the ‘bail in’ of retail investors should be dealt with appropriately. The IMF said ‘there is adequate flexibility within the existing state aid rules to be able to deal with the problems’. Italian PM Renzi said that he sees an accord between Italy and the EU as ‘within reach’.

German Chancellor Angela Merkel suggested ‘intensive talks’ are in progress between the Italian government and the European Commission.

In the USA, there were comments from some Fed officials. These suggested Brexit would have no effect on the USA but that the US economy was likely to be stuck in a low growth environment for the next two to three years and that monetary policy would likely remain essentially flat over the forecast horizon. We also have the US company Q2 results reporting season underway with markets looking for guidance from US management teams on the current trading outlook. US retail sales were ahead of expectations in June.

In Japan markets are on edge over the possibility of an eagerly anticipated large fiscal stimulus package announcement possibly of between JPY10-20trillion. Former US Fed Chair Ben Bernanke was reported to have met Japanese leaders in Tokyo and to have floated the idea of issuing perpetual bonds. In the meantime, the Government has cut its economic growth forecast to 0.9% compared to 1.7% at the start of the year.

Brent oil slipped to a two month low of under $47. Saudi Arabia’s oil production rose close to record levels in June, as OPEC forecast stronger demand for the organisation’s crude next year. The market is now beginning to re-balance due to a drop in output from higher cost producers, such as US shale oil.

And finally, the first fierce battle between No. 10 and the Foreign Office has already taken place. Over the weekend apparently, Larry, was engaged in a fierce brawl with Palmerston, the Foreign Office’s feline inhabitant!