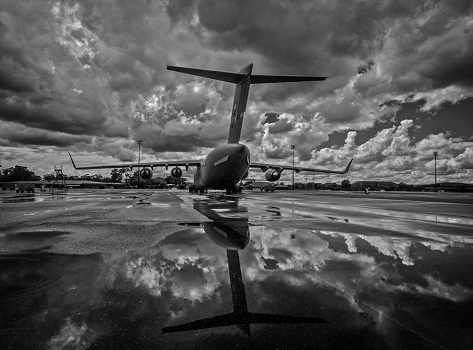 President Joe Biden is making a record $1.2tn infrastructure commitment to stimulate long term economic growth. According to the World Economic Forum, America had fallen to 13th in the world for the quality of its infrastructure.

High speed internet is seen as key to US competitiveness. However, Boeing and Airbus only recently called on the US government to delay the planned American rollout of new 5G phone services.

The world’s two largest aircraft manufacturers warned that the technology would have an enormous negative impact on the aviation industry and claimed 5G interference could adversely affect the ability of aircraft to safely operate.

US telecom giants AT&T and Verizon were due to deploy 5G from 5th January 2022. However, the US FAA has added to aircraft manufacturers’ concerns by also warning that 5G could interfere with equipment on-board the aircraft which determines altitude. The problem is that 5G signals operate in the 3.7-3.98 GHz C-band, just 220 mega-hertz difference from that of aircraft radio altimeters.

AT&T and Verizon have now agreed to a two-week delay to the implementation of 5G services. They have also offered to mitigate services around US airports for six months as a temporary safeguard.

Meanwhile, the US wireless technology industry, CITA has said that 5G is safe. CITA says if 5G was to be delayed by a year that the cost to the US economy could be $50bn.

Given the amount of computer software used in aircraft flight these days one can understand the aviation sector’s nervousness. However, one thing is clear and that is the US and China are in a long-term technological arms race, with 5G key. China is already ahead of the US on 5G implementation and America cannot afford to fall any further behind.

A shorter week due to the Christmas break with some returning to the office but many working from home. 2022 has started in a similar fashion to 2021 although markets now have the comfort of vaccines, boosters and natural immunity to cope with Covid-19 variants albeit some further disruption to global supply chains appears inevitable due to Omicron. However, markets now appear less concerned by Omicron and more worried about inflation and US interest rate policy. The US 10-year Treasury yield is close to 1.78% once again, while interest rate futures are now implying a 70% chance of a US rate hike as soon as March. The UK 10- year gilt yield is now almost 1.2%.

While there is Omicron uncertainty and cases are spiking across Europe, there was some encouraging news with cases in South Africa less than half of the recent peak. In the UK, while cases are spiking in the north of England, Professor Neil Ferguson also said he is cautiously optimistic that Omicron infection rates in London in the 18-50 age group may be plateauing. Omicron is more infectious but could this latest Covid-19 variant wave be far more rapid than Delta? The bad news is that Omicron now appears to have arrived in Asia with cases in India at a seven-month high while China is imposing draconian lockdown measures once again, ahead of the Winter Olympics.

The UK December manufacturing PMI activity indicator was steady at 57.9. Supply chain delays eased but the sector was still hampered by logistics disruptions and staff shortages. The composite PMI for December was 53.6 as the Omicron variant hit the hospitality sector especially hard in the key Christmas trading period. Meanwhile, with energy prices having soared many households are facing a cost-of-living crisis. A challenge for the Bank of England, as for other central banks, is if price inflation moves into wage inflation. It appears to be doing so, as last week both Next and Sainsbury’s announced a 5.3% pay increase for staff.

The Eurozone composite PMI activity indicator dropped to a 9-month low of 53.3 as governments imposed new restrictions with rising Omicron cases. Eurozone CPI inflation came in above expectations at an annualised 5% in December with the core rate at 2.6%.

In the US, the minutes of the Federal Reserve (Fed) meeting in December were released and delivered a ‘hawkish’ message.  The Fed characterised the US labour market as ‘very tight’ and said ‘given the individual outlooks for the economy, the labour market and inflation, it may become warranted to increase the federal funds rate sooner or at a faster pace than members had earlier anticipated. It could be appropriate to begin to reduce the size of the Fed’s balance sheet relatively soon after beginning to raise the federal fund rate.’  Meanwhile, the US December manufacturing activity indicator slipped to 58.7, although companies reported that supply chain concerns were easing.

Trading of Evergrande shares was suspended in Hong Kong after media reported that the company would be forced to demolish a residential development in the southern province of Hainan. Beijing has called on China’s banks to boost real estate lending in the first quarter as default fears grow. Chinese manufacturing activity grew at the fastest pace in six-months in December. However, steel manufacturers in Tangshan a key production centre have been ordered to slash production to improve air quality. Further anti-pollution measures are likely ahead of the 2022 Winter Olympics in February. To protect the Winter Olympics, China is also continuing to follow its Covid-19 zero tolerance policy. One by one, Chinese cities are being locked down. The key question is what effect will these lockdowns will have on global supply chains?

Brent oil moved above $82, its highest level since November, as OPEC+ agreed to stick with its planned increase in output in February based on indications that Omicron would likely have only a mild impact on demand.

Finally, US technology business and consumer brand, Apple, has become the first company to hit a stock market value of over $3trillion. In the last 16-months Apple’s market value has risen from $2tillion to $3trillion as demand soared, with people becoming more reliant on smartphones, tablets and laptops during lockdowns.