Jakarta has that Sinking Feeling 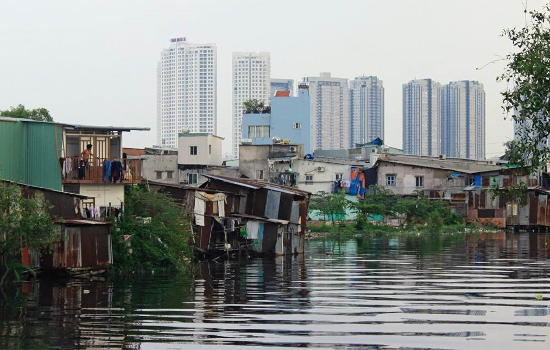 Global warming and rising sea levels are very much making headlines at the moment. Unfortunately, some cities which were originally built on swamps are proving particularly vulnerable.

Jakarta is sinking. Indonesia’s president Joko Widodo has recently announced that it is to move the country’s capital away from Jakarta. The city is the home to over 10 million people but is sinking at one of the fastest rates in the world. Northern parts of the city have sunk by 2.5 metres in the past 10 years with researchers estimating that large parts of Jakarta could be entirely submerged by 2050. Global warming and rising sea levels in the Java Sea are a factor, but the issue has been compounded by the illegal drilling for water from underground aquifers.

The new location for the capital city is not yet known but one of the front runners is Palangkaraya, on the island of Borneo. The process could take 10 years. Widodo said the move could cost $33bn.

Closer to home, the Thames Barrier, along with walls, embankments and flood gates protects an estimated 1.3mn people in London and £275bn of property and infrastructure. The most significant flood risk in the Thames Estuary is from a tidal surge event.  At the time of its construction, the barrier was expected to be used 2–3 times per year. It is now being used 6–7 times per year.

Fortunately, unlike Jakarta, London is not sinking but climate change means flooding risk is increasing which suggests either higher infrastructure spending or insurance bills.

Yet more Trump tariffs that have rattled global markets!

US-China trade talks – or lack thereof- continue to dominate global markets. While stalled talks are raising more questions about the potential impact on a global economy which is already showing signs of weakness, markets are still increasingly optimistic with regard to central bank policy. The US futures market is now pricing in a more than 50% chance of an interest rate cut by the Federal Reserve as soon as September. However, markets were caught off-guard by President Trump’s latest tariff action against Mexico.

Italian debt concerns and a complicated European political backdrop added to market concerns and saw bond yields fall and the US Treasury yield curve move deeper into inversion. The US 10-year Treasury yield fell to its lowest level since late-2017 at just over 2.2%. The yield on 10-year German bunds dropped to a record low of negative 0.21%.

Relations between the US and China appear to have deteriorated following the American block on technology companies dealing with Huawei. The state-run Global Times has said that in retaliation China is seriously considering restricting rare earth minerals to the US. It is estimated that 80% of rare earth minerals imported by the US come from China. These are used in a wide range of industries including electric cars, wind turbines and electronics. At the same time, the US Treasury remains concerned by the continued strength of the Dollar and weakness of China’s RMB setting the tone for focusing on currency manipulation as an unfair trade practice.

President Trump has also turned his sights back on Mexico tweeting that from 10th June the US will impose a 5% tariff on all goods from Mexico which will then gradually rise to 25% by October, until such time as it stops illegal migrants crossing the border. This is clearly a political move and reflects Trump’s two main themes – global trade and immigration. However, it could potentially have severe implications for the US economy. The US car industry is heavily dependent upon Mexican imports, both of components and cars. It could also have global implications with Japanese car manufacturers particularly exposed as they produced some 1.25million cars in Mexico in 2018, with many destined for the US. This could also threaten the new USMCA trade deal which is supposed to replace the NAFTA free trade agreement, but still has to be ratified by both lawmakers in the US and Mexico. No wonder lawmakers are accusing Trump of over-reaching his Presidential powers.

In the UK, mortgage approvals in April increased to the highest level since February 2017, suggesting some temporary support from the housing market from the avoidance of a disruptive Brexit at the end of March.

In Europe, there were fresh concerns about a budget stand-off between the European Commission and Italy after last week’s gains for populist parties in the EU elections. The EU has warned Italy that it could be fined up to €4bn for failing to tackle budget debt levels, but joint-deputy prime minister Matteo Salvini is feeling emboldened by his party’s success in the elections and appears determined to run a budget deficit to try to keep the Italian economy out of recession.

In the US, consumer confidence hit a six-month high as American households remained optimistic about the current economic outlook.

Activity in China’s manufacturing sector shrunk in May reflecting the ongoing challenge from US tariffs. Markets expect that the Chinese authorities are likely to continue to provide supportive measures to the economy, including further monetary easing such as further lowering reserve requirement ratios for banks as well as fiscal stimulus.

There was disappointing news for Brazil’s new far-right President Jair Bolsonaro with the economy contracting by 0.2% in the first quarter of 2019, and risking heading for recession.

Brent oil fell sharply to $61 on the back of the deteriorating US-China trade situation, despite OPEC supply cuts and tensions in the Middle East. The US National Security Adviser John Bolton has said ‘naval mines almost certainly from Iran’ were to blame for damage to oil tankers in the Gulf of Oman earlier this month.

Finally, given all the coverage about the US and China trade war you couldn’t make this last story up if you tried. Last week, the BBC news website featured pictures of President Trump’s 2020 re-election campaign placards which, according to their report, are made in a factory in………….. China!