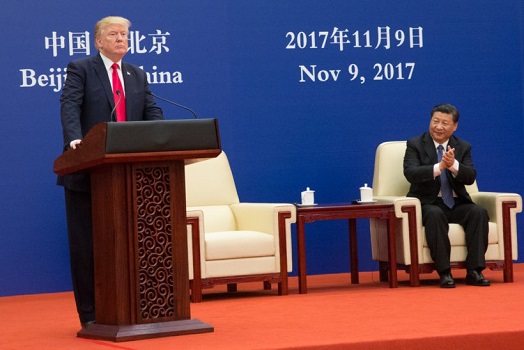 In January, President Donald Trump heralded the signing of phase one of the US-China trade agreement – ‘This is the biggest deal anybody has ever seen.’

However, could the US and China trade deal be latest victim of Covid-19?

The economic hit from lockdown measures suggest that China’s purchases of US goods is likely to fall way short of what was agreed under ‘phase one’ of the trade deal. The Centre for Strategic and International Studies estimates that US exports to China in 2020 might be only $60bn compared to over $185bn to meet the requirements of the agreement. China had agreed to buy an additional $200bn of US goods and services by 2021 above the level of 2017. US exports to China fell by 10% in the first quarter of 2020.

The timing of the spread of Covid-19 around the world will play a part. As the outbreak started in China, it was ‘first in and first out’ of lockdown measures. The Chinese economy was hit hard in the first quarter of 2020, but factories have started to return towards normal capacity and lockdown restrictions have started to lift. As the Chinese economy starts to recover, President Trump will be looking for a pick-up in US exports to China.

‘America First’ was a key plank of Trump’s last election campaign so with the damage to the US economy from Covid-19 and record unemployment it is not surprising that he has started to attack China over the causes of the outbreak and its handling of it. The Trump administration also believes that hackers tied to the Chinese government have attempted to steal data from US researchers developing a Covid-19 vaccine. Clearly, attacks like these cannot be good for US and China relations. President Trump recently said he had a very good relationship with President Xi Jinping, but ‘right now I don’t want to speak to him’. There are many things I could do. We could cut off the whole relationship.’

The discovery of a vaccine for Covid-19 is still key for the global economy to remove the threat of a second wave of infections. In the meantime, lockdown and social distancing measures will lead companies to re-evaluate their global supply chains. Some US companies are already planning to  ‘re-onshore’ manufacturing to America from China and if this trend gathers momentum then it  might not help trade relations.

While we might all be getting closer to our neighbours during lockdown it doesn’t look as if the same can be said about the US and China.

What a difference a week makes. Concerns about a second wave of Covid-19 cases were quickly forgotten. Markets shot up last Monday as it seemed all the ‘planets aligned at once’. The Chair of the US Federal Reserve said there was more he could do, there was some positive human vaccine news and a further easing of lockdown measures in Europe. The prospect of further easing from lockdown more than countered the increase in tensions between the US and China.

An experimental vaccine from Moderna Inc has shown promising early signs that it can create an immune-system response in the body that could fend off Covid-19 based on a small phase one clinical trial. Markets are waiting on initial human data from several other vaccines including Oxford University’s DNA vaccine. Moderna hopes to move to phase III trials in July and if successful then it might feasibly be available in late 2020 with a roll-out in the first half of 2021 as it is less complex to manufacture and scale-up. However, a health publication report showed that the vaccine is still very much in its early stages and there are considerable hurdles ahead. In the meantime, President Trump said he is taking the unproven drug hydroxychloroquine which would explain a lot!

The head of the IMF suggested that its recently reduced forecasts for global economic growth would have to be lowered further as the subsequent data had been worse than expected at the time of the last update in April.

In the UK, there was more evidence of the economic pain of Covid-19. A research house estimated that UK quoted companies alone had cut capital spending by over £23bn. That is work for their suppliers which has suddenly disappeared. Meanwhile, suggesting worse is ahead, the number of people claiming jobless benefits jumped by almost 70% in April from March to above 2million. Rolls Royce is the latest big employer to announce job losses with 9,000 to go, equivalent to about 17% of the workforce. Chancellor Rishi Sunak warned that the economy may ‘not immediately bounce back’. However, PM Boris Johnson has announced that all shops across England will be able to open next month if they can meet Covid-19 guidelines to protect shoppers and workers. Given the UK’s reliance on the service sector this would be a positive step.

Following the new governor of the Bank of England’s decision not to rule out negative interest rates, the UK issued its first ever gilt with a negative yield.  The gilt issue, with three years duration with a yield of minus 0.003% was more than two times oversubscribed. Covid-19 has hit the UK economy very hard but at least it helps if the government can borrow on negative interest rates!

In Europe, the Merkel-Macron proposal for a €500bn EU Recovery Fund, offering grants to the regions hardest hit by Covid-19, ran into immediate opposition. The fiscally conservative smaller member nations such as the Netherlands, Austria and Finland remain in favour of loans. German Chancellor Angela Merkel is also likely to face some domestic opposition. Meanwhile, sales of new cars in the EU collapsed by 76% in April -the single biggest fall since records began.

In the US, Jerome Powell, Chair of the Federal Reserve (Fed) said it ‘could take until the end of 2021 for the US economy to recover but that the Fed, have further measures they can take if needed.’ He did add that it may need a vaccine to get to full recovery as consumer confidence may need that. The Congressional Budget Office has estimated that the US economy could contract by 11% in the second quarter due to Covid-19.

The National People’s Conference confirmed that China is to abandon its economic growth target for 2020.  This is the first time the target has been ditched since its introduction in 1990. President Xi Jinping said it was too difficult to predict the outlook for 2020.  He also unveiled a $500bn infrastructure bond package to boost infrastructure.  The conference also outlined the Hong Kong security plan which undermines the one country, two systems agreement guaranteeing autonomy to the people of Hong Kong.

Finally, a moral dilemma – French Pharma giant Sanofi is working on a Covid-19 vaccine which is partly funded by the US while it has received research development tax credits from France. Sanofi’s CEO sparked a row by saying the US government had the ‘right to the largest pre-order because its invested in taking the risk’. The French PM responded by saying access for all was ‘non- negotiable’. Sanofi’s CEO has since said ‘there will be no particular advance for any country’. While everyone is hoping for a vaccine and markets would welcome the news – could this end up being another supply unable to meet exceptional demand crisis like PPE? Who is first in the queue? Meanwhile, in the UK, AstraZeneca has agreed to produce 30million doses of a vaccine that Oxford University is working on. Its early days but an investigational vaccine against SARs-CoV-2, has protected six rhesus macaques from pneumonia caused by the virus.