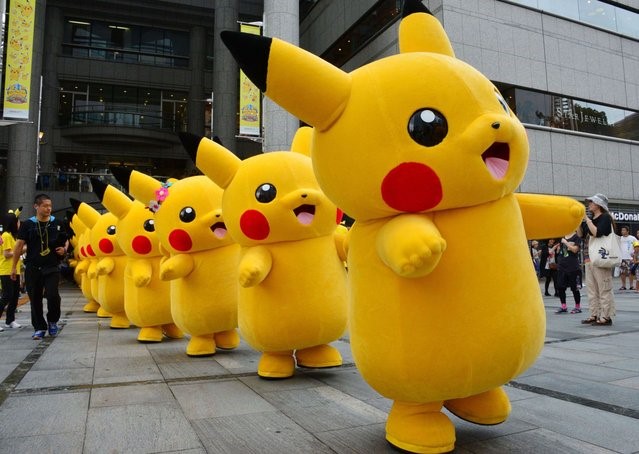 It’s the story of Summer 2016 – no, not Brexit but Pokémon Go. The smart phone app allows users to overlay images of Pokémon Go into the real world via a map linked to the phone’s GPS and camera. Downloads of the augmented reality game, which launched on July 6th exceeded 156 million in the week of its release and caused the share price of Japanese game maker Nintendo which, owns 13% of Pokémon to jump 75%. One US broker pencilled in a valuation of around $300million of worldwide revenue for the game. However, Nintendo shares have since fallen back as it revealed that the financial impact of Pokémon Go, will be limited.

Why all the hype? Apparently augmented reality (AR) is the next big thing. Tim Cook, CEO of Apple reinforced this by suggesting it is going to be ‘huge’ and Apple will be investing in AR. In Japan, McDonalds has already partnered with Nintendo to sponsor its restaurants as key locations in Pokémon Go, which should drive footfall to its sites. In the UK, high street retail and leisure businesses would appear likely beneficiaries of future augmented reality applications.

Hype or reality? Well at least Pokémon Go is getting people out and exploring. Although local youngsters playing the game have become trapped in caves and in knee-deep mud on Brean beach and have had to be freed by the rescue services. In County Down, a man jumped out in front of traffic while playing the game. The first Brit to catch ‘all of them’ has walked the equivalent of five marathons and has lost two stone!

Investors have continued to focus on US and UK Q2 company results and trading updates for guidance as well as supportive noises from central bankers. The chances of another US interest rate rise before the end of 2016 look to have increased, whereas in the UK, the chances of a rate cut in August now look more likely. All eyes will therefore be on the Bank of England this Thursday to see what stimulus measures it undertakes to support the UK economy post the Brexit vote. Will it be ‘Super Thursday’?

In the UK, the Small and Mid-cap index outperformed the FTSE 100 by 2% last week. Indeed, the FTSE 250 index has recovered the lost ground since the 24th June and Brexit result. However, while markets appear to have become more relaxed about the impact of Brexit, the recovery in small and mid-sized companies looks to have been driven by companies with an international exposure rather than domestically focused companies.

In an interview with the FT, Martin Weale, one of the more ‘hawkish’ members of the Bank of England’s Monetary Policy Committee, signalled that he had seen enough signs of weakening growth to support policy easing in August. BBA mortgage approvals fell by 4% in June, a figure that could easily have been worse given the turbulence surrounding the Brexit vote. However, UK Q2 GDP growth came in a touch stronger than expected at +0.6%. This seems at odds with predictions that uncertainty in the run-up to the EU referendum weighed on activity but the data was skewed to April and May. Is this the strongest growth we are likely to see for some time? According to a study by market research specialist Gfk, UK consumer sentiment suffered its steepest fall in 26 years following the Brexit vote.

In Europe, EU President Juncker seems to have reined back some of his more aggressive Brexit rhetoric by acknowledging that it will be some months until negotiations between the UK and EU get underway. However, he showed no sign of giving ground on allowing the free movement of labour. Furthermore, he announced that Michel Barnier, the former French foreign minister and scourge of the City of London, would be the Brussels’ Brexit negotiator. The UK government responded coolly but some city financiers described the appointment as ‘incredibly provocative’. In the meantime, Eurozone economic growth halved to 0.3% in Q2 2016 compared 0.6% to Q1 while inflation ticked up slightly to 0.2%.

The ECB published its long awaited European bank stress test. The overall results will probably be seen as a bit of a relief as there were no nasty surprises and most banks were in the region of where analysts had expected them to be with the exception of RBS and Barclays. Interestingly, the test did not include any Brexit type scenario or more importantly model for a prolonged period of low or negative interest rates. Banks in Cyprus, Portugal and Greece were also not included as they were deemed too small.

Worries will still persist over the Italian banking sector.

In the USA, market expectations for at least one interest rate rise this year, possibly in September, have surged to over 47% from a post Brexit low. This followed the latest US Fed statement. The Fed delivered a positive assessment of the US economy with job data supporting household spending. Members of the Fed appear less concerned about potential external shocks but would like to see inflation picking up towards the 2% target before further monetary tightening. US durable goods orders in June provided some grounds for caution with business investment down by 4% on the previous month. US Q2 GDP also came in well below expectation at an annualised rate of 1.2% although was a slight improvement on Q1. However, US economic data continues to suggest a gradual pick-up in activity. The Conference Board’s index of consumer confidence was steady in July, ahead of expectations while new home sales reached their highest level since early 2008.

In Japan, PM Shinzo Abe unveiled the government’s plans for an economic stimulus package worth over 28trillion Yen which is expected to be approved on August 2nd.

The Bank of Japan pledged to increase the pace of ETF purchases but under-delivered against expectations by keeping negative interest rates and QE plans on hold.

In China, the latest manufacturing survey for July saw the first increase in activity for some seventeen months.

The Brent oil price slipped back below $44 as in addition to concerns about excess supply, US reserves data showed a spike in inventories. Also, there were reports suggesting that hedge funds have been opening up short positions in response to the recent reversal in momentum.

Finally, according to the medical journal, The Lancet, working in an office is more dangerous than smoking. This is due to concerns about the lack of exercise while sat at a desk by office workers. We thought the greater risk might be from the fight over the temperature setting of the office air conditioning!