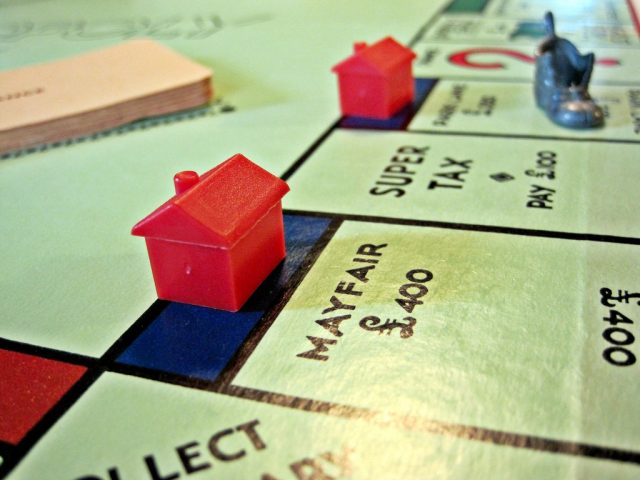 While we haven’t seen a giant silver top hat, an old boot or a Scottie dog on the streets of London, are foreign investors playing a real-life game of Monopoly in our capital city? A number of trophy buildings on London’s skyline are now either owned by foreign investors or have recently been acquired by them in the last 12-months. This includes the Gherkin, the Shard, the Walkie Talkie, and the Cheesegrater. The most recent to change ownership is the Walkie Talkie in Fenchurch Street, which was purchased by Lee Kum Kee, a Hong Kong food company for £1.3bn. This is a record price for a British property! The buyer, best known for its oyster sauce, is not planning to move to the site, but is having a punt on the London property market.

What is going on? Brexit has created uncertainty in the property market, particularly for many in the City’s financial sector. It was only a year ago that many property funds had to suspend trading as investors rushed for the exit.

The seller of the Walkie Talkie is Land Securities Group, the UK’s largest quoted property REIT which, sold the property on a net rental yield of 3.4%. It intends to return cash to shareholders as a result of the sale. Interestingly, British Land, the other major quoted UK property REIT, has said it also intends to return cash to shareholders from recent property disposals. However, it continues to sell into a strong investment market, as opportunities to purchase at attractive returns are more limited. When foreign investors are buying trophy property assets and UK listed property companies are selling and returning cash to their shareholders, it is telling you something. Foreigners still see London trophy property as an attractive investment, yet our leading companies can’t see the value!

Investors are starting to think about the meeting of finance ministers and central bankers in Jackson Hole in the USA later this month. A key issue could be the US debt ceiling and whether Donald Trump will be able to raise it given his failure to repeal Obamacare. In addition, will Mario Draghi, president of the European Central Bank (ECB) who is attending the event, use it as a platform to guide the market on possible tapering of the ECB’s stimulus programme? Something to challenge central bankers will be the fact that inflation across the 20 largest economies fell to its lowest level in almost eight years in June, despite their previous massive stimulus programmes. Meanwhile, investors continue to watch the escalating tensions between the USA and North Korea. However, the Dow Jones share index in the USA touched a new high of 22,000, helped by strong results from Apple. The US Dollar by comparison dropped to a 15-month low against a trade weighted basket of currencies. Matters have not been helped by the FBI investigation into Russian involvement in the US election, with special counsel Robert Mueller to use a grand jury.

Credit rating agency Moody’s raised alarm over UK car loans, credit cards and buy-to-let mortgages that have been packaged together and sold to institutional investors. This follows earlier concerns from the Bank of England (BoE) about the level of consumer credit growth.

A story in Property Week suggested the government has asked the London School of Economics to look into the Help-to-Buy scheme. The article said that the scheme could be scaled back in the run- up to 2021 by restricting it to first time buyers and lowering the value of houses covered from £600,000 to £300,000.

Downing Street insisted it remained committed to ending the free movement of EU citizens in the UK, after days of contradictory statements from ministers. Meanwhile, an independent report suggested that Brexit could drive up bank capital requirements by as much as 30%. This follows a comment from the Chief Executive of HSBC that Brexit could cost them $200m-$300m and that it intends to move 1,000 investment banking jobs from the UK to France.

The UK manufacturing sector received a timely boost from export demand in July. Export orders saw the biggest improvement since 2010. However, construction activity dropped to an eleven-month low in July. The BoE decided to hold interest rates at 0.25% by 6-2 votes, but as expected lowered the UK economic growth outlook from 1.9% to 1.7%, describing conditions as ‘sluggish’. The BoE also highlighted that business investment had been weaker than expected due to Brexit uncertainty. It also shaded its 2018 economic growth forecast from 1.7% to 1.6%. The BoE view of the economy was supported by data from the dominant services sector which suggested the UK was on course for another steady, but sluggish expansion in the third quarter. UK car sales fell for the fourth month in a row in July.

Eurozone unemployment fell to its lowest level in eight years in June, while core inflation, which strips out volatile food and energy prices, accelerated unexpectedly to a four-year high of 1.3%. Retail sales across the eurozone exceeded expectations in June. The Czech central bank became the first in the EU to raise interest rates since the financial crisis, moving from 0.05% to 0.25%. This is likely to be the start of a gradual exit by central bankers from a period of record-low borrowing costs.

In the USA, car sales fell in July for the fifth month in a row, driven by lower rental fleet sales and weaker consumer demand. US consumer spending in June was sluggish. Core inflation, a measure the US Fed pays close attention to, was stable at 1.5%. US jobs data for July was better than expected with the unemployment rate falling to match a sixteen-year low.

China’s July manufacturing data edged slightly lower, but within this, construction revealed the highest level of activity since the end of 2013. Is there a lift in infrastructure and construction projects ahead of the 19th National Congress this autumn?

Brent oil drifted slightly lower to $51 on media stories that OPEC oil production increased in July due to a recovery in output by Libya.