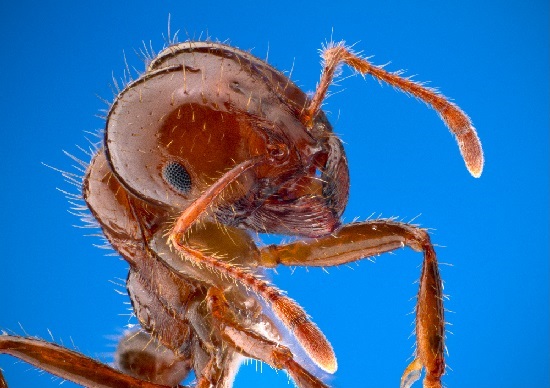 Japan is reported to be preparing to repel an invasion. Given the latest news on missile tests many of you might suspect from North Korea, but the Japanese are actually preparing for an invasion from red fire ants. The South American invader has been found in shipping containers at a number of Japanese ports.

Red fire ants are feared for their venom, tenacity and cost to the local ecology. They are estimated to impact the global economy by $7bn a year in damage caused and cost to control. Australia is estimated to have spent $270m since 2001 trying to eradicate the invader. The Queensland state government has calculated that red fire ants could potentially cause A$43bn of damage over the next 30 years to wildlife, livestock and humans.

Japan is already seeking advice from New Zealand and Taiwan and is looking to deploy beagles trained to sniff out red fire ants and drones laden with pesticides that can spray potential nesting sites.

Red fire ants are perhaps one of the unforeseen consequences of the globalisation of trade and increasing use of shipping containers. Climate change and greater urbanisation are also likely factors in the spread of red fire ants and pests generally. Pest control sounds an attractive area of investment to us.

UK fund managers have returned to their desks today after one of the hottest August bank holiday on record to face the usual issues – North Korea and Donald Trump tweets!

North Korea has fired a missile over northern Japan in a move the Japanese Prime Minister Shinzo Abe called an ‘unprecedented’ threat to his country.

Is the honeymoon over for Donald Trump and the US stock market? Investors continue to fret about the political drama in Washington amid Donald Trump’s nuclear brinkmanship with North Korea and White House infighting over the president’s response to demonstrations in Charlottesville. Furthermore, hopes of the president delivering tax cuts, infrastructure spending and deregulation have faded although a new initiative was suggested on tax last week. Nerves were not helped by a statement from Donald Trump that he was ‘willing to risk a government shutdown’ to ensure funding for the construction of a wall along the US-Mexico border. Trump also revived a threat to pull the USA out of the North American Free Trade Agreement (NAFTA) with Canada and Mexico. He said ‘I think we’ll end up probably terminating NAFTA at some point’ and followed this up with a tweet threatening to make Mexico pay for the wall.

Otherwise, investors were focused on the meeting of central bankers in Jackson Hole, USA but this proved to be something of a non-event. Janet Yellen Federal Reserve Chair, offered little fresh information on the outlook for US monetary policy while Mario Draghi, the European Central Bank president, did not give any guidance on the tapering of the ECB stimulus programme.

Sterling hit an eight -year low against the euro as investors considered the divergence in economic outlook for the UK and eurozone.

In the UK, Countrywide, the largest estate agency said it expects the growth in house prices to slow to 1.5% reflecting weakness spreading beyond London. It is forecasting a 2% fall in prices in prime central areas of London. A lack of supply is expected to support the national housing market. Meanwhile, business investment has continued to stagnate during the second quarter of 2017 as Brexit- related uncertainty has led businesses to delay making spending decisions.

In the USA, the Trump administration has decided to push hard for tax reform and edge away from a national security investigation into steel imports in a bid to swing Republican support behind the president after the political turmoil of recent weeks.

In Asia, another possible unforeseen consequence of the de-stabilisation of the region by North Korea?  Chinese sanctions against South Korea are exacting a heavy toll on business. Since Seoul agreed in July last year to host a US missile defence system, South Korean car sales in China have fallen by 50% and visits by Chinese tourists are down by almost 70%.

China has laid out plans to cut pollution in its northern provinces starting in October, just as the country is set to hold its 19th Party Congress, by cutting aluminium production. This had a positive effect on a number of commodities with aluminium prices hitting a six-year high while zinc rose to a ten-year high.

Brent oil hovered around $51. Media reports suggested that Saudi Arabia, Russia and others are seeking to take a harder stance against oil producers that fail to comply with agreed production cuts. A meeting of OPEC and non-OPEC oil producers is expected at the end of September. Meanwhile, the West Texas crude oil discount to Brent widened further as US shale oil output continues to grow.

Finally, a financial joke has been named the funniest of the Edinburgh Festival Fringe. ‘I’m not a fan of the new pound coin, but then again, I hate all change’.