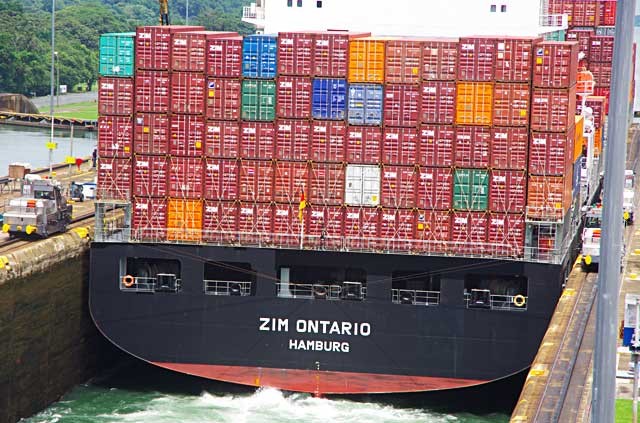 MV Hammonia Grenada was built in 2010 at a cost of £37m. Some seven years later, it is the youngest ever container ship being sold for scrap, with an estimated price of just £4.4m. Why?

The globalisation of trade and central bank low interest rate policy of recent years led the container shipping industry to build more ships, which has resulted in a massive oversupply of vessels. However, there are structural issues at work as well. For example, in June 2016, the Panama Canal was widened to accommodate larger ships. Prior to the upgrade, Panamax vessels were designed to the maximum dimensions of a ship that could pass through the canal’s lock gates. Now, larger ships called ‘Neo-Panamax’ capable of carrying 13,000 containers, with 19 container rows on deck, can use the widened Panama Canal.

Panamax containerships have suffered the most significant destruction in value of any ship type in more than a generation. Many more vessels are likley to be heading to the recycling yards.

The global commercial shipping fleet is 50% bigger than it was before the last financial crisis. Global economic indicators are picking up which suggests an increase in seaborne trade. However, Donald Trump’s plans to create more manufacturing jobs in the US along with the possible introduction of trade barriers would not be good for global trade or container ships.

The two most powerful men in the world, Donald Trump and Xi Jinping met for talks. It appears as if the Chinese have offered some concessions on better market access for financial sector investment and US beef exports to help avert a trade war. However, North Korea was no doubt the main feature of the talks. President Trump’s warning that the US could take unilateral action against North Korea’s nuclear programme has alarmed Asian investors. Is this an attempt to pressure China to reign in its neighbour, North Korea, or a signal for possible military strike? Trump has deployed a US aircraft carrier to the Korean Peninsula, although US Secretary of State Rex Tillerson said the US isn’t interested in ‘regime change’ in North Korea.

Then, to add to the uncertainty, following a chemical weapon attack in Syria, Trump ordered a US missile attack on a Syrian air base. President Trump has shown himself to be highly unpredictable having switched his view on Syrian President Assad in just a few days.

After a positive first quarter of 2017, markets have a few things to ponder in the second quarter besides North Korea and Syria. Amongst these are the next phase of the ‘Trump trade’ having failed to repeal Obamacare, US central bank monetary policy, the French presidential election, Brexit negotiations getting underway, possible signals of European Central Bank (ECB) tapering of QE and OPEC’s oil production cut resolve being tested by rising US shale activity.

The market mood was not helped by comments by US House Speaker Paul Ryan that US tax reforms will take longer to accomplish than the repeal and replacement of Obamacare. To add to market angst, the US Fed minutes ‘viewed US equity prices as high relative to standard valuation measures’. The minutes also went on to say that, provided the US economy continued to perform about as expected, then gradual increases in interest rates would continue and that a change to the Fed reinvestment policy would likely be appropriate later this year. The Fed also believes that meaningful US fiscal stimulus would likely not begin until 2018. The comments from the House Speaker and Fed ‘took the wind out of the sails’ of US equities.

In the UK, PM Theresa May appeared to soften the UK’s Brexit stance by suggesting a possible extension of free movement past 2019. Interestingly, Germany’s ‘Mittelstand’ (small and medium sized privately owned companies) have said they want a ‘soft Brexit’ saying a ‘hard Brexit’ would be harmful to them.

Elsewhere in the UK, manufacturing activity continued to grow solidly in March above the long-term average but was weaker than expected. UK construction activity slowed with the loss in momentum centred on housebuilding. However, the dominant services sector expanded faster than expected in March. Meanwhile the Bank of England said that average UK credit card balances in 2016 were £62bn. The BoE is now worried about the threat to the UK financial system from the rise in consumer borrowing. Is the BoE beginning to regret cutting interest rates last year?

In Europe, the economic recovery continued to gather pace with the Eurozone jobless rate at an 8-year low. Emphasising the improving outlook, Spain’s central bank increased its economic growth expectations for the country for the next three years. Otherwise, investors continue to focus on the French election with the next key television debate on April 20th.

In the US, disappointing car sales in March raised questions about the strength of consumer spending and the ‘Trump reflation trade’.  US jobs data came in below expectation, but some argued the data was impacted by winter storm Stella which stopped people from working due to the bad weather.

Ratings agencies Fitch and S&P both downgraded South Africa’s credit rating to junk status following the recent political upheaval. This placed the Rand under further pressure and in turn those FTSE 100 companies with Rand dominated earnings.

Japanese shares have given up all of this year’s gains. The export-led Japanese market had been a big initial winner from the Trump election win with the subsequent strength in the US Dollar. Questions over Trump’s ability to deliver has seen the Dollar weaken recently against the Yen, dragging Japanese equities down.

A report in the FT estimated that oil held in super tankers had dropped by 16% this year, suggesting that OPEC production cuts were starting to re-balance the oil market. Brent oil rallied to a four-week high of $55 as the US attack on Syria also raised concerns about Middle East production.

Global mining companies ‘got a shot in the arm’ after Chinese authorities announced plans to develop another major 100 sq. km special economic zone south-west of Beijing.

Finally, talking about size matters. Last week, the market value of electric car maker Tesla increased to over $47.5bn surpassing both Ford and General Motors. Tesla was set up in 2003. Ford was established by Henry Ford in 1903 while General Motors was set up in 1908. Tesla, which is not yet profitable, is valued by US investors like a growth technology company whereas Ford and General Motors are valued like traditional industrial stocks. Remind anyone of the dot-com bubble of the late nineties?