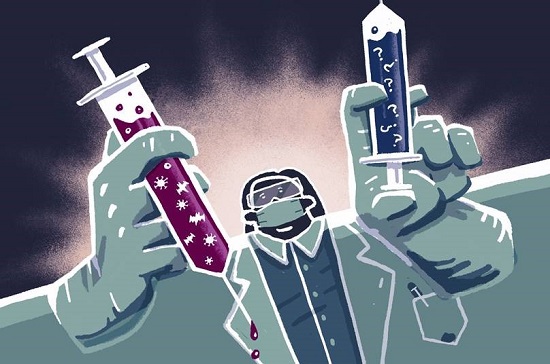 Is the ‘race’ to develop an effective Covid-19 vaccine also becoming the ‘new nationalism’, as world leaders jostle with each other for access and control? Are corners being cut to win?

This follows President Vladimir Putin’s announcement of regulatory approval of the Sputnik-V vaccine after less than two months testing. Russia appears to have skipped phase 3 clinical trials and is going ahead with a mass vaccination in October 2020. Russia has likened the search for a vaccine to the space race contested by the Soviet Union and the US during the Cold War and called it a Sputnik moment.

America’s highly respected infectious disease expert Dr Anthony Fauci, said he had serious doubts about the Russian vaccine. Others have reacted more positively and Israel said it would enter into negotiations if it is found to be a ‘serious product.’

US electioneering is starting to ramp up and introducing a vaccine for Covid-19 is becoming a major political goal for the Trump administration. After mounting criticism of his handling of the crisis, Trump is similarly believed to be looking to bypass normal US regulatory standards requiring a widespread phase 3 trial, by bringing in an “emergency use authorisation” (EUA). This would allow a vaccine known as ChAdOx1 nCoV-19, that is being developed in a partnership between AstraZeneca and Oxford university, to be introduced in October – ahead of the elections.  With US public confidence in the safety of vaccines low, this appears a bold move.

The rapid pace with which Covid-19 vaccines are being developed is quite amazing. Scientists have certainly set the bar high. The fastest record for the development of a new vaccine was previously four years, for mumps. The Ebola vaccine took about six years to develop.

With many leading countries having already signed supply deals with vaccine developers, what about poorer nations? If there are countries with populations that have not been vaccinated how can we return to normal global trade, travel or the movement of people. How will the world vaccinate 7 billion people? We are not completely safe until everybody is safe.

Relations between the US and China remain tense as the US Presidential election race got underway and politicians remain at loggerheads over the next coronavirus relief bill. Despite this, the FAANG technology companies helped nudge the S&P 500 index up to a new high, with Apple becoming the first US company to reach a $2 trillion market cap.

Covid-19 cases continued to grow globally. Meanwhile, images went viral on social media of thousands of Chinese shoulder-to-shoulder, with no face masks in sight, frolicking in a pool and cheering along at a music festival. Where was this? Wuhan, the original source of Covid-19 – what a difference a year makes! Hope for the rest of the world? In the meantime, most of the attention has shifted to Europe, where fears of a second wave continue to build across the region with the infection rate seeing spikes of more than 70% in some countries. Despite this data, Angela Merkel warned Europe against new lockdowns and highlighted the importance of acting in coordination to avoid repeating the heavy-handed measures adopted during the initial peak, which would deliver another blow to Europe’s fragile economies.

The US administration expanded its sanctions on China’s Huawei, adding 38 Huawei affiliates around the world to its banned list, claiming the company was using international subsidiaries to circumvent the sanctions which prevent the export of US-based technology. President Trump launched his election campaign by vowing to create 10 million jobs in 10 months saying ‘we will end our reliance on China’. He is planning to offer tax credits to entice US companies to move factories from China to the US and also threatened to impose direct tariffs on US companies which don’t move jobs back. He has also threatened to strip government contracts from firms that continue to outsource work to China. President Trump also said that he has cancelled the trade talks with Beijing days after a scheduled review of the phase-one trade agreement was postponed. “I don’t want to deal with them now. With what they did to this country and the world I don’t want to talk to China right now. They should have stopped it. So that’s correct – I cancelled talks with China”. In contrast, China’s commerce ministry confirmed that talks had been agreed in the coming days.

Meanwhile, China ramped up tensions with Australia by launching a probe into wine imports from that country. Relations have deteriorated between China and Australia since the latter called for an independent enquiry into the outbreak of the Covid-19 pandemic.

The latest round of Brexit negotiations appears to have stalled again, this time over access for British truck drivers to the EU, although talks are believed to still be stuck on multiple fronts, including fisheries and level playing field agreements. The UK submission of a draft free-trade agreement was interpreted by the EU as a “desperate move”.

In the UK a combination of pent-up demand, stamp duty and Covid-19 lifestyle change saw the highest level of house sales in a decade between July 12th- August 8th of £37bn, a jump of 20% on the previous record month according to Rightmove. Inflation was higher than expected in July up from 0.6% to 1%, although perhaps not a surprise given lockdown and social distancing impact on the production of some goods. Furthermore, the economy continues to enjoy a substantial amount of support from the furlough scheme and the very well-received ‘eat out to help out’ scheme, with real-time data indicating managed restaurant sales were up 8% year-on-year. Overall, retail sales growth in July was +1.4% compared to the same month last year as some of the forced saving during lockdown in Q2 is being spent as retail outlets reopen. UK PMI data reported on Friday also provided encouraging signs, with the composite output index reaching a seven-year high of 60.3 compared to 57 in the previous month, although we continue to interpret survey data with a high dose of scepticism during these uncertain times and note that UK survey respondents are cutting jobs at an increased pace to reduce overheads before the furlough scheme is scaled back.

Germany’s finance minister proposed extending the government’s short-time work scheme to 24 months from the current 12 months, saying the measure would cost an extra €10 billion. At the end of July some 5.6 million Germans were thought to be on the scheme, down from 7 million in May. Europe continues to face concerns over a second wave of Covid-19 and flash PMIs for August started to reflect a loss of momentum in economic sentiment driven by weakness in the services sector as companies across the bloc continue to scale back jobs.

In the US, housebuilder confidence improved in August for a fourth straight month and reached a record high. Coronavirus infections in the region continue to trend down, although the seven-day average of new deaths has remained above 1,000 since the end of July. As the attention continues to shift towards the Presidential Election campaign, with polls suggesting a tightening of the gap between Biden and Trump, negotiations on the next coronavirus relief bill are not expected to gain much traction until closer to the 30-Sep funding deadline.

Finally, another example of just how tough it has been due to the Covid-19 lockdown. John Pye Auctions, which specialises in stock from liquidated firms has had its busiest month in 52 years. More disturbing is the fact that the firm’s Managing Director is ‘shocked about the speed at which it happened and the scale of it’ and warns ‘this could be just the tip of the iceberg.’