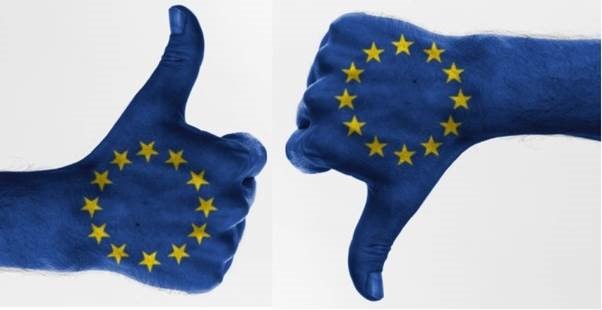 The current in/out debate, reminds us of the old song ‘doing the Hokey Cokey’.

It now seems the politicians are about to lead us on a merry dance and that the wider public at large are not currently in a sufficiently informed position to comprehend or resolve the various pros and cons.

So we now know the Brexit vote is to be held on the 23rd June. As we write, the result looks too close to call. The current proportion of ‘don’t knows’ is estimated to be as much as 20% fuelling uncertainty on the outcome. ‘Outs’ have gained traction of late, with much of the press appearing to adopt a negative stance, notably with respect to the latest Cameron ‘deal with Europe’. London Mayor Boris Johnson’s defection hasn’t helped matters.

The ‘Common Market’ we voted to remain part of in 1975 looks very different to the EU as we know it today. At a time of economic uncertainty, we appeared to be voting on a trade based agreement to maintain the UKs competitiveness and to provide economic growth and prosperity. Some 41 years on, the concept of ‘free trade’ has rather been taken for granted and the arguments have all moved on.

Unfortunately confusion is likely to persist for 4 months and possibly longer.

The decision making process seems to centre on:

• Global business investment
• The City of London, a global centre for finance
• Free trade
• Employment rights
• Financial freedoms and support
• Major commercial opportunities and long-term investment
• Global presence and the size of the pond we swim in
• The importance of many migrant workers to the economy

Proportion of Total UK Trade with the EU, December 2015 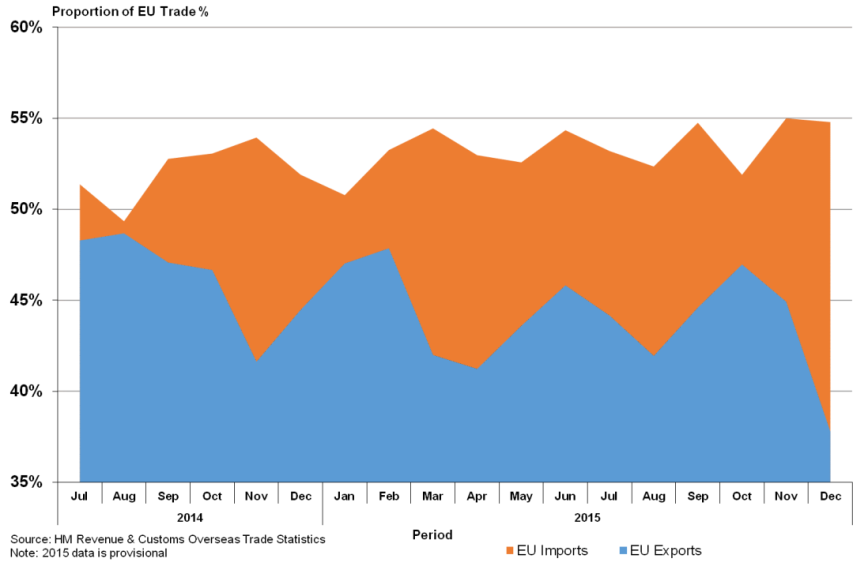 Fear is likely to be used as a weapon. Fear of the unknown and the fear of the current economic climate. In the grand scheme of things we are a small island and the Empire was a long time ago. What could change if we exit and what are the risks we perceive in the run up to the vote?

Things appear to have stabilised, but the market’s initial reaction – Sterling weakness, creates an imported inflation issue, along with the unwelcome prospect of us having less spending power abroad. Is the € also in the spot light? Eurozone break up fears are likely to increase.

Mark Carney, Governor of the Bank of England, has flagged UK GDP is likely to come under pressure. Further easing measures might be necessary.

The global flight to safety has seen gilt yields fall to a record low. However, Government borrowing costs could rise if the UK receives a rating agency downgrade.

London has been a key driver of the UK economic pickup. Here the housing market is vulnerable to Brexit. Who is likely to continue buying – Russia, China and Middle East are now out of favour. Also, stamp duty changes are coming in post April 1st, this will add a further 3% cost to second home purchases.

Brexit is likely to cause ripples to the global economy and raise European break up and recession fears.

EU mass exit fears? Could we see a Eurozone break up, producing a domino effect. France next – FREXIT?

There is low interest in politics at present, but Brexit is likely to attract new voters that didn’t vote at the general election. A high turnout is expected.

We are likely to see opinion poll angst as time progresses. Media coverage of the migrant crisis is likely to raise the tempo of the debate.

Equity markets remain volatile – however a weak £ is good news for $ based global large cap companies and UK exporters.

Lead indicators of business confidence such as companies in advertising, recruitment and London property appear to be signalling a deferral in decision making by customers. UK centric companies will be vulnerable to a slowing economy.

Scotland. The SNP have suggested another call for independence vote, if an ‘out’ majority.

We are likely to hear a lot about Article 50 of the Lisbon Treaty. Although something of a grey area, some are talking of an automatic suspension of rights whilst others an extended period of negotiation of up to 2 years. If we constitutionally vote to go out, can we renegotiate a swift return?

Political rifts are likely to be exposed – it is rumoured 50% of Tory MPs are likely to favour exit. Whilst we can look forward to breaching the leading Party divide – Cameron – Corbyn – Sturgeon, campaigning together are unlikely bedfellows.

In the run up to the vote, we are likely to experience 4 months of uncertainty.

The vote is as important to the Eurozone as it is to the UK.

Wriggle room. There is the potential of EU ‘sweeteners’ being considered on the contentious issues, if the polls suggest support appears to be going the wrong way.

After June 23rd there will be one of two outcomes: