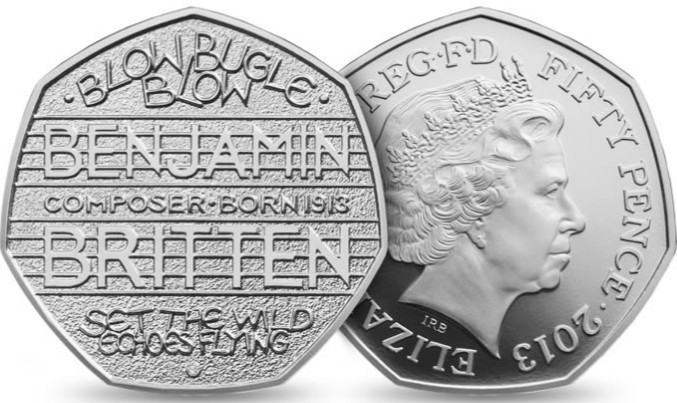 No, not the means of deciding whether the UK remains in or leaves the EU, but what is on the reverse side of Britain’s coins.

‘I’ve got a Benjamin Britten 50p. Is it really worth thousands?’ We saw this question on the internet from someone who thought they had discovered a rare coin as they had seen a similar coin being offered for sale on eBay for £800. On further investigation, we discovered a similar coin actually sold on eBay for 11p with package and postage of £1.99!

The Benjamin Britten coin was created in 2013 to celebrate the birth of the British composer and was one of 5.3 million minted. However, 1,000 ‘silver proof’ coins were minted with 92.5% silver content as opposed to 75% copper/25% nickel content and these have a greater potential worth than face value. These had an original price of £90 and can now sell for up to £300.

And what can we learn from the above? We Brits are a nation of collectors, whether its stamps, coins, pin ball machines or lawn mowers (don’t ask!). More importantly, whether its coins, shares or houses; at the end of the day, something is only worth what someone else is willing to pay!

The prospect of Britons voting to leave the EU later this week continued to fuel global stock market volatility. At one point, both Sterling and UK shares dropped to their lowest levels in months. The UK 10 year gilt yield fell to a record low of 1.2% as fixed interest investors took the view that a Leave vote would see the BoE extend its QE programme. Then one shocking and tragic event in the UK looked to have changed things.

The initial shift in market sentiment at the start of last week was triggered by a trio of opinion polls showing the Leave campaign had moved into the lead. In addition, The Sun newspaper was reported to have swung behind the Leave campaign while the BBC reported that the Labour Party had failed to engage with its supporters who were drifting to the leave camp. The Labour Party belatedly started to campaign for Remain by warning of the Brexit risk to the NHS.

Given the error of margin in previous opinion polls, the market has also been monitoring the bookies odds. These had dipped from 80% Remain/20% Leave just a few week’s past, to 55%/45% before recovering to 64%/36%. The President of the British Polling Council said that ‘we no longer have a favourite in this referendum’. The EU vote however, was put into some perspective by the tragic death of Labour MP Jo Cox, with eyewitness reports to the BBC suggesting the killer shouted ‘put Britain first’. All referendum campaigning was temporarily suspended.

While it seems insensitive to talk about markets in relation to this tragic event, bookies odds over the weekend seemed to indicate that it may have possibly changed the shape of the closing stages of the EU referendum. The bookies odds moved to 71% Remain In/29% Leave.

The UK equity market started to adjust to the increased risk presented by the shift towards Leave in the polls and bookies odds at the start of last week. The FT-All Share Index at one point last week was down by almost 6% since the start of the month. This was focused more on domestic UK companies such as banks, housebuilders, retailers or those exposed to government spending. Following the latest bookies odds survey the UK equity market has re-bounded strongly this morning.

Brexit risk took much of the blame for fall in the UK market and the shift away from risk assets last week. However, investors appear to have been reassessing the valuation of global equities in relation to the message that fixed income assets are sending about global growth. Safe haven buying saw the 10 year German bund yield fall to a new low of minus 0.03%. This also partly reflects the fear of potential Brexit contagion spreading elsewhere in the Eurozone.

The other factor helping global bond yields stay low is the US Fed. The latest Fed meeting concluded in dovish fashion with July looking like it’s off the table for an interest rate hike. Indeed, the chances of an interest hike in the remainder of 2016 according to US futures markets has dropped below 50%. Fed Chair, Janet Yellen said that an increase in interest rates would not commence until there is sufficient momentum in the US economy. She also indicated that the potential market disruption from a UK referendum Leave vote was also a factor in Fed decision making.

In the UK, retail sales in May increased by 3.1% on the same time last year which appeared to be boosted by lower food and clothing prices. The Bank of England warned that while consumer spending has been solid, that there is growing evidence that uncertainty about the referendum is leading to delays to major economic decisions that are costly to reverse. The BoE also warned about the ’risks of adverse spill-overs to the global economy’.

In Europe, industrial production recovered in April after a couple of weak months.

In the USA, retail sales provided more evidence of robust domestic demand with May sales up 0.5% following strong sales in April. The US Fed, while dovish on its interest rate guidance, did downgrade the US economic growth outlook for 2016 from 2.2% to 2% and also slightly decreased its projection for 2017. While the labour market is expected to continue to strengthen, the pace of growth has slowed while business investment is ‘soft’. US core inflation for May increased very slightly to 2.2% but not enough to divert the Fed from its more dovish stance.

The Bank of Japan followed the US Fed’s lead and maintained monetary policy at current levels.

Oil dipped, hovered then dipped below $48 before recovering to $50. Besides the slower US economic growth guidance for the US Fed, the International Energy Agency said that although demand growth and production disruptions were helping to reduce excess supplies, the oil market is not expected to find a sustained balance until well into 2017. Canadian oil production is also expected to recommence this week after the recent wildfires.