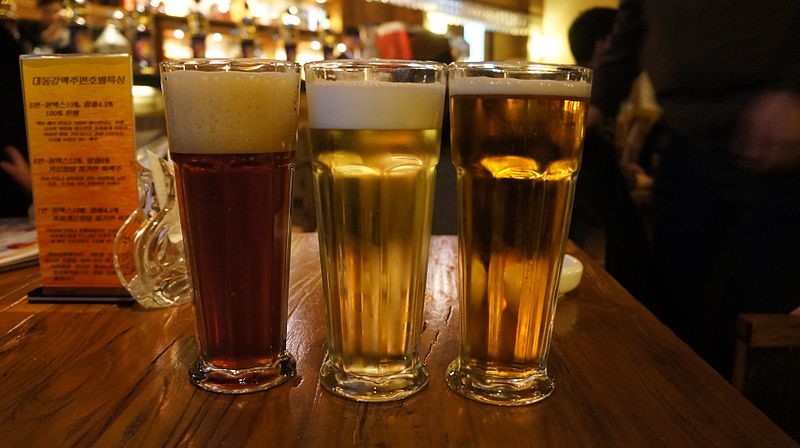 North Korea is an enigma and continues to make the headlines, for all the wrong reasons.

On a more positive note, North Korea recently opened its doors to its first ever beer festival. Tourists from the West sat on the banks of the Taedong river drinking Taedonggang beer, named after the river. There were seven beers on tap: Beer 1, Beer 2, Beer 3, Beer 4, Beer 5, Beer 6, and — you guessed it — Beer 7. Why should this interest us here in the UK?

Well, did you know that this beer was produced by equipment from a former English brewery, that is now in North Korea? It’s the old Ushers brewery from Trowbridge in Wiltshire. I can actually remember touring the ‘brand new’ brewery when it was installed in Trowbridge when Ushers was, albeit briefly, a listed company. However, the brewery site closed in 2000 and Ushers pubs business was acquired by Punch Taverns in 2004.

The brewery equipment was subsequently sold for £1.5m to North Korea and a team travelled from that country to watch the dismantling and transportation. The former head brewer of Ushers recalled their visit saying that the North Koreans took everything including plastic toilet seats! What is the old saying? ‘One man’s waste is another man’s treasure’.

With the fall in Sterling following the EU referendum, there could be plenty of overseas companies lining up to buy UK assets in the months ahead.

Markets survived a major crisis last week as Mary Berry said she would quit the Great British Bake Off when it moves to Channel 4.

Otherwise, last week was dominated by central bank meetings in the USA and Japan. Some global investors were expecting there to be ‘Super Central Bank Wednesday’.  In the event, there appeared to be some relief that the Bank of Japan did not move further into negative interest rate territory. By comparison markets had expected the US Fed to leave interest rates unchanged but to sound more ‘hawkish’ suggesting a move instead by mid-December. The US Fed commentary proved to be pretty much as expected. So much for ‘Super Wednesday’ as it felt more like ‘what was all the fuss Wednesday?’.

In the UK, the OECD raised its growth outlook slightly from 1.6% to 1.8% suggesting that the impact from Brexit is yet to be felt. However, it did cut its 2017 growth outlook from 2% to 1%, although this does leave the OECD towards the more optimistic end of the current range of market forecasts.  The Bank of England’s Q3 Agent’s Summary reported an improvement in UK business sentiment and consumer spending. However, it did also suggest that companies’ investment and employment intentions had fallen implying a flat outlook for the next 6-12 months.

In the US, there was an unexpected jump in housebuilder confidence to an 11-month high which is a promising lead indicator of housing starts.

The US Fed kept interest rates on hold but the accompanying statement and language was firmed up. For example, it mentioned that US economic growth had picked up; the labour market has continued to strengthen and the economic risks were roughly balanced. However, three Fed committee members did call for a rate rise. This broadly confirms the market view that the Fed may raise rates in December. However, in her press conference Fed Chair Janet Yellen insisted that the November 2nd meeting is still ‘live’ but we doubt that the Fed would want to raise interest rates less than a week ahead of the US Presidential election. The longer term interest rate ‘dot plot’ projections also suggest a flatter tightening path.

While the US Fed has not moved interest rates we note that the 3 month US Libor rate has moved up significantly over the last few months from under 0.65% to over 0.85%. This appears due to changes in US legislation regarding the structure of US $ money market funds. While a technical issue, the US Fed might be sensitive to the move in 3 month Libor.

The US Presidential election polls continue to see-saw. In early May, Donald Trump had pulled away from Hilary Clinton in a number of national polls. A series of ‘gaffes’ by Donald Trump saw Hilary Clinton then get well ahead in the polls, before the latter’s health scare has seen things become more ‘neck and neck’. As we get closer to election day on November 8th, the knock-on effects to global market sentiment might be considerable, especially given Donald Trump’s anti-globalisation rhetoric.

In Japan, the Bank of Japan (BoJ) held its main interest rate at minus 0.1% and maintained the current pace of asset purchases. The major change was away from the targeting of base money in favour of ‘yield curve control’. Basically, this means the BoJ is maintaining economic stimulus, but helping the banking sector by steepening the bond yield curve as negative interest rates are not good news for banks. The new policy called QQE will control both short and long term interest rates.

Oil hovered around $46 as exports out of Libya continued to be halted, while OPEC’s secretary general suggested there could be an extraordinary meeting between Oil ministers if a consensus is reached at the informal meeting this week.

Finally, according to research by Cambridge University, human fund managers can beat computer algorithms in financial trading by relying on ‘gut feelings’. Perhaps there is hope for me after all and I might not be replaced one day by a robot. I might even celebrate with a pint of Taedonggang Beer.