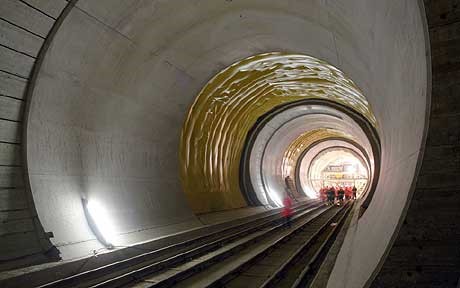 Euro 2016 has ‘kicked off’ in France and the EU referendum debate continues to rage. In the meantime, other parts of Europe are getting closer. The world’s longest and deepest rail tunnel has officially opened in Switzerland.

After 68 years of planning and 20 years of construction the 35 mile twin-bore Gotthard tunnel will provide a high-speed rail link under the Swiss Alps between Northern and Southern Europe. The tunnel surpasses in length both the Seikan tunnel in Japan and the Eurotunnel between France and the UK. Interestingly, Switzerland, which is not an EU member, got the Gotthard tunnel project endorsed by Swiss voters in a referendum in 1992. Swiss voters also backed a subsequent proposal from environment groups to move all freight travelling through Switzerland from road to rail.

The project which cost over £8bn will commence services in December 2016 and will create a mainline rail connection between Rotterdam in the Netherlands and Genoa in Italy. Journey times from Zurich to Milan will be reduced by an hour to around 2 hours and 40 minutes. Goods carried by a million lorries a year will now go by rail. Switzerland is officially the happiest country in the world but the 2,600 workers are happy to no longer be considered boring!

Following the EU referendum on 23rd June, despite the 31 mile Channel Tunnel, will we be closer to, or further from Europe?

Last week concluded in ‘risk off’ mode with a fairly broad sell off in global stock markets. This affected us in the UK but notably, European stocks felt the greater impact. With less than two weeks to go markets are becoming increasingly mindful of the EU Referendum, and the potential implications of it. Whilst polls continue to paint a muddied picture of the outcome, bookmaker probabilities have seen a notable move in recent days, and now stand at a 65% chance of remain against 35% for leave, from as high as 80% remain, 20% leave last week. This in combination with broader, global economic concerns saw safe haven assets very much in demand, and alongside Central Bank actions, helped to drive global bond yields to their lowest levels on record.

Whatever the outcome on June 23rd, there is no escaping the fact that Euroscepticism is on the rise across Europe. According to a research report from the Pew Research Centre about 51% of respondents across ten EU countries still favoured the EU but 42% wanted more power returned to their country. Interestingly, at one European debt conference the 1,000 finance delegates, were asked ‘Would Italy leave the EU on a five year view? Over 80% said yes! Indeed, following ‘Brexit’ risk someone has suggested this could be an ‘exIT’ risk! Given, Italy is one of the largest bond debt markets in the world this is a worrying thought.

Apart from the EU referendum, global markets remain focused on US economic data and implications for the timing of any US interest rate hike as well as China. The World Bank joined the growing band of institutions to downgrade the global growth outlook, cutting its 2016 growth forecast to 2.4% from 2.9%. Slowing global growth and Brexit risk has driven a shift from risk assets with the yield on 10 year UK government bonds dropping to a record low of 1.2%.

In the USA, Hillary Clinton secured the Democratic Party nomination for the US presidency to go toe-to-toe with Republican nominee Donald Trump in early November. A recent survey of US finance directors has found that 47% of them suggested that they would defer capital spending and recruitment due to the political concerns.

US Fed Chair Janet Yellen’s response to the previous week’s grim US jobs data quite rightly cautioned against reading too much into one month’s data. She asserted that ‘the positive forces supporting employment growth and higher inflation will continue to outweigh the negative ones’ but without specifying a time scale for action. She also said that a UK vote to leave the EU could have ‘significant economic repercussions’ for the USA’ and is one factor that the Fed would take into consideration. Following her comments, the implied probability of a July US interest rate hike dropped to 25% from over a 50% chance expected as recently as the end of May. The US Dollar hit a four week low on a trade weighted basis while US equities touched a seven month closing high at one point.

In the UK, some retailers have been struggling and now petrol prices have risen to their highest level since September 2015. However, just when the stock market had become acclimatised to pre-EU referendum weakness in UK economic data, manufacturing output for April revealed a surprise 2.3% increase. Elsewhere, the Royal Institute of Chartered Surveyors said that demand from buyers for houses had fallen at the fastest rate for eight years and that nationally house prices are expected to experience a short-term drop for the first time since 2012. This appears to be due to a slowdown after the recent surge ahead of the stamp duty changes but also the uncertainty resulting from the EU referendum.

In Europe, credit rating agency Fitch has suggested that European banks would have to raise €170bn of additional capital or sell €500bn of sovereign debt if the EU and ECB push ahead with plans to break the ‘doom loop’. The EU and ECB is believed to be considering ways to introduce a capital charge for banks holding sovereign debt which, historically was seen as risk-free. Not surprisingly, given the position of some Italian banks, Italy is warning it plans to block such a move. The other key development in Europe was the launch of the ECB’s programme to buy corporate bonds as part of its latest stimulus effort. There are already some promising signs that the region’s credit markets are reviving and the ECB programme coincided with German 10 year bund yields hitting a new all-time low of 0.015%.

In Japan, Q1 GDP was revised upwards to 1.9% as smaller company capital spending was not as weak as first thought.

Chinese exports fell by more than expected in May, down by over 4% but the rate of decline in imports did slow as domestic demand appeared to respond to stimulus efforts.

Brent oil climbed back to $52 due to continued supply disruption in Nigeria, whose crude is comparable in quality to Brent. Signs of a reawakening in the US shale industry would suggest that the scope for further material price strength from here may well be limited, barring further problems on the supply side.

The proximity of the EU referendum and the increasing uncertainty as to the outcome means volatility will likely remain high. In addition, three of the four major global central banks meet this week. The chances of a US rate rise this month now sit at around 4%, and it would certainly be a bold move to inflict the surprise of an increase on financial markets given current sentiment. The Bank of Japan seems to be fighting a losing battle against global forces at the moment in its attempts to generate inflation, its currency continues to be viewed as a safe haven and the resulting strength of the Yen is having the exact opposite effect to what the BOJ is seeking.

Finally, our thoughts are with those affected by the shocking events in Orlando over the weekend.