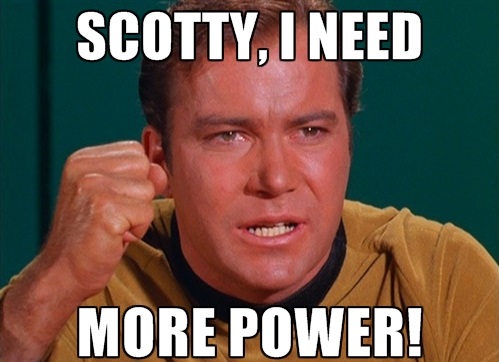 Fans of the original Star Trek TV series will fondly recall Scotty’s reply to Captain Kirk, whenever he ordered the engine room of the USS Enterprise to increase speed: ‘I can’t do it Captain. I don’t have the power!’ Could we all one day end up like the Enterprise?

Today the government has announced a ‘shake-up’ in the electricity market. Not only making it easier for people to generate their own electricity, the government has also announced it will invest £246m over the next four years in battery technology. Including a £45m ‘battery institute’ competition, with the aim of making the UK a world leader in battery technology for electric vehicles.

Whilst we do not see the end, just yet, of the internal combustion engine, there is no doubt signs that car manufacturers are shifting new product development to hybrid and electric vehicles. Volvo Cars, part of Chinese car maker Zhejiang Geely, recently announced that every model it makes from 2019 onwards would have an electric engine.

Interestingly, National Grid has been doing some long-term projecting. It has assumed there could be 1 million electric cars on the road in the UK by 2020 and as many as 9 million by 2030 and that by 2050, market share could feasibly reach 90%. As things stand, this would create a need for an additional 18GW of power at peak times assuming car owners would typically plug in their car to power it up after coming home from work at 6pm. This would require the equivalent capacity of nearly six Hinkley Point nuclear power stations. One option to ease some of this burden could be through the use of ‘smart charging’ which would power up car batteries when electricity demand is lower.

Sounds like the UK is going to need to invest a lot more in power generation and smart charging technology, otherwise we could all be saying ‘I need more power!’

Following recent events, Lloyd’s of London has made attempts to estimate the potential economic damage of an extreme cyberattack, coming up with a figure of $120bn according to their models. This would surpass the cost of some of the worst natural catastrophes! In contrast, the cyber insurance market generates premiums of just $2.5bn per year. Although this could become one of the fastest-growing segments within the specialist insurance market, the lack of understanding of this new threat will pose some serious challenges to underwriters.

In the UK, inflation figures for June came at 2.6%, below consensus expectations, recording the first moderation in inflation since October 2016, whilst warm weather boosted retail sales. The main negative influence on prices was motor fuels, as fuel prices fell by 1.1% compared to May 2017. Will inflation reach 3%? Based on the market’s reaction, it seems more likely that the Bank of England will hold policy steady when it meets in August.

One factor that could push up inflation in the coming months is the government clampdown on ‘rip-off’ card charges. Businesses will no longer be allowed to charge an extra fee to customers paying by card instead of cash. Companies such us Just Eat obtained about 13% of its revenues from card fees last year. Airlines and councils will also be affected. The most likely outcome in response to this will be companies rising prices to cover the cost, and thus penalising those customers who love carrying cash in their pockets.

In Europe, ECB president Draghi tried to play down the prospects of imminent tapering, however the Euro continued to rally strongly, which could be a headwind to the earnings outlook for Eurozone equities. As a result, the main European indices were down last week.

In the US, the failure of Republicans to push through healthcare reforms drove the dollar to its weakest level since August 2016. This political setback didn’t have a huge impact on the main US indices despite the read-across to the future implementation of promised tax reforms, deregulation and infrastructure. A weaker dollar could help reduce the US trade deficit, which is one of the outstanding issues on Trump’s agenda. China and the US began discussions last week amid fears that the Trump administration could threaten to invoke a ‘national security’ exception in global trading rules as a way to introduce either tariffs or quotas on steel imports. Such a decision could lead to retaliation from US trading partners, triggering a wave of protectionism.

In Japan, the BoJ cut its forecast for prices from 1.4% to 1.1% for the year to March 2018, and kept monetary policy on hold. Given this change, it now seems less likely that the Bank of Japan will reduce stimulus any time soon, hence increasing the divergence against the Fed and the ECB. An important point to highlight is the inclusion of e-commerce, also known as the ‘Amazon effect’, among the number of factors holding back price gains in Japan. This could be an important shift in determining how inflation is defined going forward, and may help explain the ongoing challenges facing central banks when it comes to achieving their inflation targets.

China reported better than expected GDP numbers for the first half of 2017. A strong domestic consumer accounted for as much as 63.4% of GDP growth, while double digit growth in exports could be seen as a sign of strength in global demand. On a more cautious note, the scale of shadow banking operations has started to be considered a serious issue. The People’s Bank of China admitted that off-balance sheet activities have turned out to be more than double previous estimates, to the extent that shadow banking is now bigger than all other regular activities of the lenders combined.

And finally, the first phase of the government’s planned four-year investment in battery technology will be called the Faraday Challenge, named after the scientist and great experimentalist, Michael Faraday. Albert Einstein held Faraday is such high regard, that he actually kept a picture of him on his study wall.