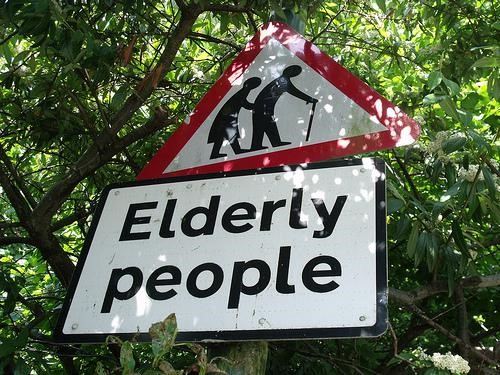 The annual ‘winter crisis’ in the NHS, has once again highlighted an underlying problem – the nation’s age demographics. South Warwickshire NHS Foundation has produced a telling chart showing the hospital’s admissions by age for the last quarter of 2016. 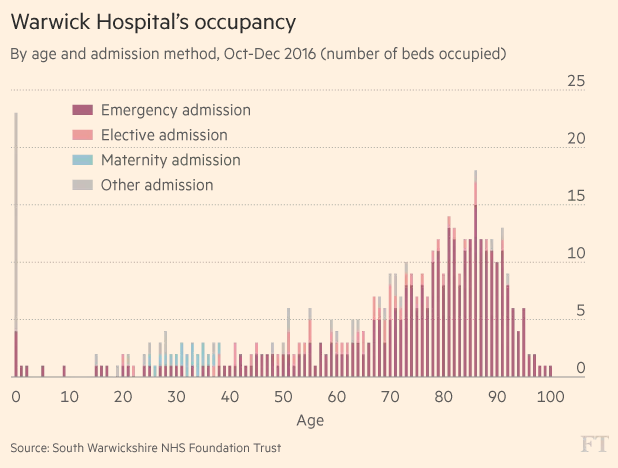 The graph slopes up steadily from the age of 64 and spikes into the mid-80’s. Frail, elderly patients tend to take longer to diagnose because they often have multiple conditions including dementia. They also tend to stay in hospital longer once admitted.

Understandably, hospitals would prefer to prevent many elderly patients from ever attending, by using visiting nurses and in-home carers. However, many of these ‘social care’ services are funded by local authorities, not the NHS. Understandably, these have been progressively squeezed by austerity measures. The private sector providers of such services are also under greater pressure due to the implementation of the National Living Wage.

Who provides the health funding for the UK’s ageing population? Sajid Javid, Communities secretary, has confirmed council tax will be allowed to rise faster than expected to bail out struggling social care services, by raising the cap in annual increases to 5%. Surrey is to hold a referendum on a 15% rise in council tax. Previously, 95% of local councils were planning to increase bills by the previous maximum allowed, without holding a referendum.

So, who cares? Planned increases in council tax bills will place a further burden on households who are already starting to see disposable income squeezed. There will no doubt be pressure on the Government to fund the shortfall, resulting in further pressure on our borrowings.

Global markets became a bit jittery as Donald Trump started to initiate some of his more protectionist policies and tweeted that ‘we will build that wall’. This was reflected in some weakening in the US Dollar and Sterling moved back above $1.25. Nonetheless this didn’t stop the US Dow Jones share index passing 20,000 for the first time, as the ‘Trump rally’ was re-ignited by a flourish of Presidential executive orders with investors hoping that his package of tax cuts and fiscal stimulus will boost US economic growth. Meanwhile in the UK, the Supreme Court ruled that Parliament must vote on whether the government can start the Brexit process.

Donald Trump began his first week as President of the USA busily signing executive orders. What has the market learned so far? He has already pulled the USA out of the 12-nation Trans-Pacific Partnership, calling the move a ‘great thing for the American worker’. This had been well flagged during his election campaign. The speed with which Donald Trump has acted suggests that the trade agreement with Canada and Mexico is likely to be renegotiated. US-Mexico trade relations continue to grow strained as Mexico’s president officially cancelled a planned meeting with Donald Trump. The Trump administration has suggested it may impose a 20% tax on Mexican imports to pay for the planned border wall.

In a meeting with US business leaders, Donald Trump said he would impose a ‘very major border tax’ on US companies that move manufacturing overseas and export back to the USA. He has also taken steps to move forward with two major oil pipelines that Barrack Obama had previously blocked. The Trump administration is also progressing lists of potential infrastructure projects on a state-by-state basis.

Treasury Secretary Steven Mnuchin reignited the Dollar debate saying ‘that from time to time, an excessively strong Dollar may have negative short-term implications for the economy’. Meanwhile, Trump’s budget chief nominees Mick Mulvaney confirmed that the USA’s $20-trillion national debt burden will need to be ‘addressed sooner rather than later’.

In the UK, the Supreme Court handed down its ruling on triggering Article 50 which means Parliament must vote on the start of the Brexit process. The government plan to put a short bill to Parliament, continuing to work towards the triggering of Article 50 by the end of March, looks to remain valid. The Supreme Court also ruled that the government does not need formal consent of the devolved regional assemblies which might have delayed the process due to the polls in Northern Ireland.

Airbus warned it may cut investment in the UK if it has to bear extra costs as a result of Brexit, a senior executive told MPs. In the same meeting, the Chief Executive of the Society of Motor Manufacturers and Traders warned that while Nissan was expanding production at its Sunderland plant, that other companies were at least sitting on their hands until there is a bit more clarity. BT issued a profit warning relating to an accounting issue in Italy but also flagged ‘soft’ government spending in the UK. On a more positive note, UK manufacturers reported the strongest growth in orders in over two years. However, while weaker Sterling is driving export optimism, it is having a detrimental effect on the cost of imported raw materials.

In Europe, key elections in the Netherlands, France and Germany continue to overshadow markets. In France, the potential re-alignment of political forces in the centre and centre-left will need to be monitored carefully in the next few weeks as it could turn the first-round of the election campaign from a two-person, to a three-person race. In the Netherlands, elections are due to take place on March 15th with the far-right Freedom party neck-and -neck with the ruling liberal WD party.

A broadly stable set of Purchasing Manager Index (PMI) indicators in Europe appeared to point to a solid start for growth in Europe in 2017, suggesting Q1 growth of about +0.5%. Improving economic signals and higher inflation expectations also saw a sell-off in Eurozone bonds as the yield on French, German, Italian and Spanish bonds all touched a 12-month high.

In China, the People’s Bank of China (PBoC) increased its medium -term lending facility by 10 bps in liquidity injections. While a modest increase would appear to show the PBoC’s determination to contain financial risks, it served as a warning shot to some leveraged investors in China’s financial market and could also be an attempt to reduce the pressure of capital outflows in the wake of US interest rate policy. There were also fresh curbs imposed by the authorities on new loans, especially mortgage lending.

Brent oil hovered around $55. BP made an interesting assessment of the world’s oil market saying that there was twice as much technically recoverable oil as the world is expected to need between now and 2050, making it likely that some oil reserves will never be extracted. The surplus could spur increasing competition between oil producers to ensure their assets were not left stranded as demand gradually shifts from oil to cleaner forms of energy.

Finally, talking of a hospital crisis. A patient who has spent two years in a bed, has been evicted from James Paget Hospital in Norfolk after the hospital obtained a court order. Given the Department of Health says that the average daily cost of looking after someone in a hospital bed is about £400, then the cost of his stay, excluding any legal bill, would be £292,000! No wonder there is a crisis!