Who has got the hump? 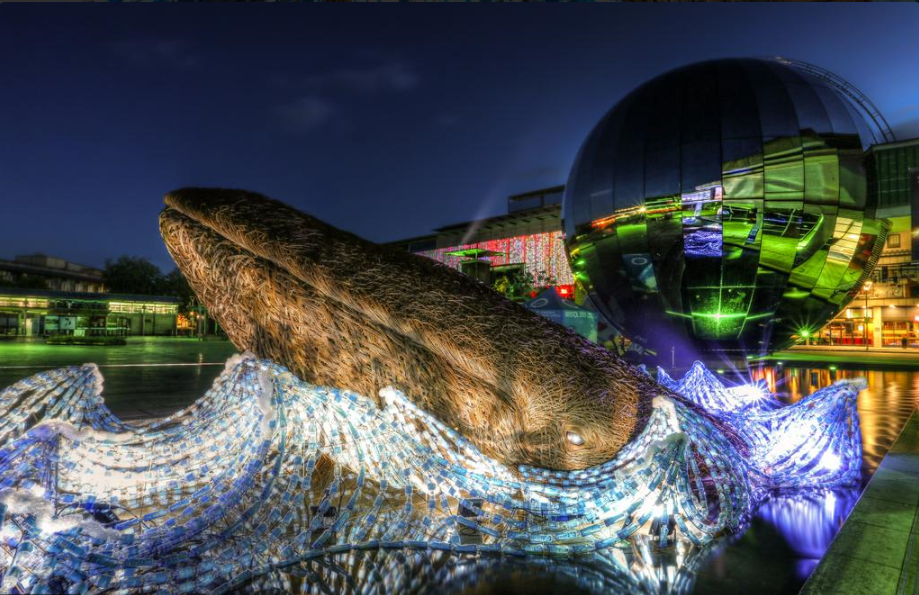 To mark Bristol’s green capital status, a sculpture of two life sized whales has been made from Somerset willow and 70,000 old plastic bottles. The blue whale and humpback whale weigh a whopping six tonnes. The bottles were collected from the Bath half marathon and Bristol 10K race. The sculpture highlights the threat of plastic pollution to the world’s oceans, particularly from plastic bags.

Talking of whales, who has got the hump? Holiday makers, lorry drivers and politicians have no doubt got the hump with the Calais migrants. Travel chaos has been created on both sides of the Channel tunnel. Not only will this be a terrible start to your holiday if driving to Europe but could, have an adverse economic impact on the UK which, if left unresolved could become more significant if not addressed properly and soon.

Lots of smaller Chinese investors have no doubt got the hump with the Chinese authorities. Despite unprecedented attempts over the past month to try to stop the rout in Chinese equities, the Shanghai Composite index saw its second biggest fall in history last week, dropping 8.5% in just one day alone. We met a China fund manager just ahead of the collapse. Interestingly, he confirmed what we and many others have suspected for some time that, the real rate of growth in the Chinese economy is lower than the official data. However, he did not feel that the stock market correction would derail Chinese consumer spending as the market was still significantly higher than twelve months ago and that not having seen a ‘wealth effect’ on the way up that it was unlikely to impact on the way down. More interestingly, he did point out that real interest rates in China are still very high from a global perspective suggesting that the authorities will undertake more easing to support the economy.

However, in the meantime, a number of global companies ranging from Audi to Siemens and Caterpillar have all referred to the negative impact of China on their trading. Within China, factory activity contracted by the most in two years in July as new orders fell more than expected.

Global commodities have been hit hard by concerns about China. This in turn is likely to create further questions for some central banks particularly in the US and UK which have signalled the impending break with ultra-low interest rates. While the US Dollar and Sterling have been strengthening in anticipation of higher interest rates, the ultimate decision should be inflation and the strength of economic recovery. The current weakness in the oil price could continue to dampen inflation in the short term. Markets are currently factoring in a US rate hike in September or no later than December and a UK rate hike possibly in February.

The looming US interest rate hike, together with Chinese equity volatility and falling commodity prices has led to the currencies of many developing countries falling to fifteen year lows. For example, the Brazilian Real has fallen over 20% so far this year while the Turkish Lira has dropped by over 15%. While this makes these countries exports more competitive, it also increases import costs, raising inflationary pressures and increases the cost of servicing debt denominated in foreign currencies, threatening financial stability. Brazil has not been helped by credit agency Standard & Poor which warned it was considering downgrading Brazil’s credit rating by one notch to ‘junk’. How is all this currency volatility reflected in the real world? Well, you only have to study the latest results from Proctor & Gamble which has been adversely impacted by Venezuela’s currency problems.

In the UK Q2 GDP growth accelerated, as expected, to +0.7% driven by the services sector and strong North Sea oil and gas production. Consumer confidence continues to be supported by a robust housing market evidenced by net mortgage lending, which saw its biggest gain for seven years in July.

In Europe, the Spanish and Irish economies were shown to be the fastest growing in the Eurozone in the first half of 2015. Spain, aided by foreign tourism achieved its eighth straight quarter of growth while Ireland returned to its pre-crisis size. The Eurozone economic sentiment indicator reading for July was also ahead of expectation, which was a welcome sign of the resilience of confidence across the Eurozone to the Greek crisis.

In the USA, the Fed made only minor changes to its policy statement, suggesting that the economy is expanding moderately supported by solid job gains. This would appear to leave the door open for the first rate hike in September. The first estimate of Q2 economic growth was reassuring with a 2.3% increase driven by consumer spending which was up by 2.9% in Q2.

In Japan, retail sales growth was modest suggesting that consumers remain in a cautious mood.

Oil slipped to its lowest level in four months due to the turmoil in China which has been the world’s largest importer of oil and refined products.

Finally, Amazon has signed Top Gear’s departing trio in a $250m deal to present a new series on Amazon Prime. Jeremy Clarkson is like Marmite, you either like or loathe him but he does come out with some priceless quotes. ‘I feel like I’ve climbed out of a biplane and into a space ship’. As Bob Dylan sang ‘times they are a changin’, something we always try to bear in mind when making our investment decisions.