An American Dream or an 8th Wonder? 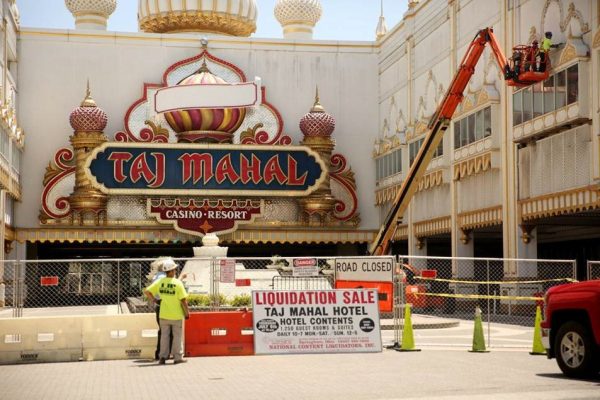 If Trump manages the US economy like his former Atlantic Casino, then, then we all have a problem.

This included the collapse of the palatial Trump Taj Mahal casino. He once dubbed it ‘the eighth wonder of the world’.  The Trump Organisation was approximately $3.4bn in debt of which $832m was personally guaranteed by Trump, according to a later report by the Casino Control Commission. If you want to know how Trump rose from the ashes, then try to watch the TV documentary.

Fast forward to today with Donald Trump as US President. The Bipartisan Policy Centre (BPC), an independent US think-tank, predicts that the US is heading into some of its biggest budget deficits outside of the Great Recession or Second World War. The US debt ceiling will be raised by the appropriate amount until March 2019.

The BPC thinks Congress will settle on plans that drive the budget deficit to 5.7% of US gross domestic product (GDP) in 2019, with annual borrowings exceeding $1trillion – nearly double forecasts from a year ago.

President Trump entered office, with debt at 77% of US GDP. U.S. debt is now on track to reach $30 trillion and it may be on course for 100% of GDP in a decade’s time. With the US Fed raising interest rates and inflation ticking up no wonder bond markets have become more uneasy. The BPC think-tank says that ‘to have an economy that is healthy or even in a boom and a trillion-dollar deficit is unheard of’.

Remind anyone of an Atlantic City casino? Is Trump taking an even bigger gamble, but this time with the US economy?

UK investors awoke to an American nightmare last Tuesday morning with a brief but sharp global sell-off following another ‘flash crash’ in the USA. The Dow Jones index in the USA recorded its worst intraday decline in history dropping 800 points in 10 minutes or by almost 6%. The Dow Jones and S&P 500 indices closed the day down by 4.6% and 4.1% respectively. The American market ‘VIX’ earthquake sent aftershocks around other global markets. Across the week, the S&P index fell by 5.2%, its worse week since 2016.  While inflation concerns were a trigger, technical issues which relate to trading in some US equity derivative VIX based products exacerbated the fall.

The UK stock market was inevitably caught up in the ‘aftershock’, but also had to contend with the additional headwind from a rally in Sterling after comments from the Bank of England (BoE) on future interest rate policy. The US market took another lurch downwards towards the end of the week moving into officially correction territory with a fall of over 10% from its recent peak. The second move down was all about higher bond yields and particularly the higher yield debt sector as opposed to the earlier fall which was derivatives driven. In the UK, the All-Share index closed the week 8.6% below its January high. Following the correction, UK shares now trade on a 12-month forward earnings multiple of 13.4x, the lowest since December 2014 which looks attractive against global peers.

The Bank of England increased its outlook for the UK economy, predicting growth of 1.8% in 2018, up from 1.6% previously. It also suggested that interest rates may have to rise at a faster pace. ‘Monetary policy would need to be tightened somewhat earlier and by a somewhat greater extent over the forecast period’. The interest rate futures market is currently pricing in a 70% chance of a 0.25% increase in interest rates in May while some economists are forecasting another hike in November. The BoE’s rationale behind a more ‘hawkish’ stance appears to be the stronger than expected global economic growth picture and, in the UK specifically, signs of higher wage pressure from tight conditions in the labour market.

The US market has experienced the lowest level of volatility for many years and this has seen some investment banks develop new methods of ‘financial speculation’. This has involved some investors taking ‘short’ positions via exchange traded funds against VIX, the financial instrument for measuring market volatility. Amid a low interest rate world, this had proved a winning strategy as markets remained calm. However, when the US market fell last week and VIX started to rise, these ‘short sellers’, had to close out their bets by buying the VIX index and the value of some of these ‘short’ funds dropped by up to 90% in a day. This resulted in the biggest buying order for VIX ever and a record rise in the VIX index. This painful episode has led Nomura and Credit Suisse to close their VIX based ETF short funds as a result of this single day’s trading. Spikes in VIX, usually indicate increased volatility and risk for equities in the months ahead. While there is clearly an increased economic risk with inflation, a lot of the VIX rise last week seems to have been as a result of self-inflicted wounds from equity derivative products.

The US equity market had been priced for perfection so any shock was likely to be magnified. The trigger for the sell-off seems to be the outlook for inflation after the previous week’s US wage data. Bond yields had been rising on concerns about US inflation and the worry that the Federal Reserve will have to increase interest rates at a faster pace than expected. This coincides with the arrival of a new head of the Fed, Chair Jerome Powell.  Furthermore, President Trump’s tax cuts are coming in as US unemployment is at an historic low and the government is paying for the tax cuts by issuing more bonds at a time when the US Federal Reserve is stopping buying bonds.

The sell-off, at this stage, feels more like a long overdue correction rather than a signal of reverse into the next financial crisis. It is perhaps a useful reminder, if one was needed, of what might happen in the future if interest rates were to normalise. Central bankers, economists and investors will now be watching US wage growth data very closely to ensure inflation ‘behaves itself’. Markets will not want synchronised global economic growth snuffed out by too rapid a hike in interest rates by central bankers. US inflation data, published this Wednesday will now be key.

Turning to Brexit, EU negotiator Michel Barnier warned that a transition period immediately after Brexit in 2019 is ‘not a given’. After a week of technical discussions between UK and EU civil servants, Barnier said that ‘substantial’ disagreements remain.

In Europe, Germany’s centre-left Social Democrats reached an agreement in principle on a coalition government with Chancellor Angela Merkel’s conservatives.

Brent oil succumbed to the global sell-off falling back to under $64, some 10% below its recent high.

Finally, Lloyds Bank has banned its customers from buying Bitcoin and other crypto-currencies on their credit cards following recent sharp falls. Bitcoin which touched $19,000 in November, dropped below $6,000 at one-point last week. The Citizens Advice Bureau Chief Executive said ‘crypto-currencies are just one part of the problem. One of the key causes of the problem is that credit card lenders have provided limit increases to people already in financial difficulty’. Asset bubbles, flash crashes and irresponsible lending? Haven’t we been here before?