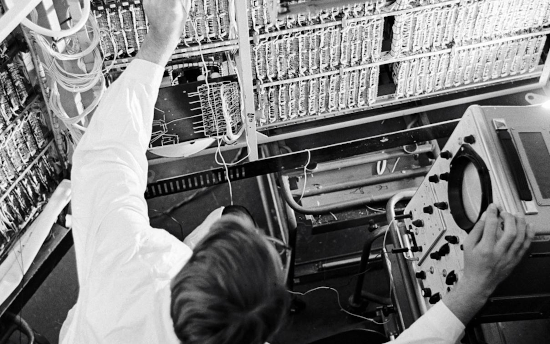 Quantum computers are the next big thing to happen in computing.

Quantum computers use ‘qubits’, components that exploit quantum mechanics which put simply means they can do many things simultaneously. Their power and speed are almost unimaginably faster like the speed of a supercomputer compared with an abacus.

‘Ultracold quantum matter research’ is a new field of science that is both exciting and alarming. Scientists have found that if you cool certain elements to a few hundred billionths of a degree above absolute zero – minus 273.15C, they can form the basis of a new era of faster computers. This advance will change our lives but it is likely to transform warfare, with un-hackable communications, precision weapons guidance systems, and radar so sensitive it will detect stealth bombers and submarines.

China’s president Xi Jinping has made it clear that China’s ambition is to acquire quantum technology. This is part of China’s goal to become the world’s strongest military power by 2050. China has already deployed a quantum submarine detector based on SQUIDS – Superconducting Quantum Interference Devices. Quantum radar and sensors can detect submarines by detecting disturbances in the Earth’s gravitational field. This technology could also be used to guide missiles whose control system can’t be hacked as they do not use GPS as well as to detect and destroy incoming missiles from much greater distances away.

To add to the growing sense of unease, China is currently exploring limiting rare earth mineral supplies to US defence contractors, necessary for the production of F-35 fighter jets and other weaponry. This is a hugely worrying development for Western manufacturers who depend upon raw materials from China.

Relations between the US and China deteriorated under the presidency of Donald Trump as he put ‘America First’. However, it now feels more like ‘China First’ under President Xi Jinping particularly as the West has been weakened far more significantly by Covid-19. Could we have entered a new Ultra-Cold War?

Markets remained in optimistic mood on vaccine/stimulus hopes. Besides recovery in global economic activity, inflation continues to be the focus for investors and bond yields continued to edge up. Indeed, the cost for governments of funding their greatly increased Covid-19 debt burden is growing as the yield curve steepens further. For example, the UK 10-year Treasury yield is almost 0.7% but the thirty-year yield is now above 1.26%. In the US, the 10-year Treasury yield has broken through 1.3%. Manufacturing economies which will benefit from a recovery in global economic activity remained in demand with Japanese equities reaching the highest level since 1990 following good export sales. Some investment banks are already starting to suggest the start of a ‘super cycle’ in some commodities due to government stimulus measures and copper hit a ten-year high. The globally dominated UK market also benefited albeit this was slightly restrained by Sterling which nudged up to touch $1.40 driven by progress with vaccination.

The vaccine programme to get us all out of the Covid-19 crisis received a welcome boost from Israel which leads the world on vaccination. Israel has now vaccinated 70% of its population and a study of 600,000 of those who have received both of the required Pfizer-BionTech jabs showed a 94% drop in symptomatic cases.

There is evidence from the UK that the Covid-19 vaccine rollout is already reducing deaths according to a member of the Royal Statistical Society. Older people make up 10% of cases but 80% of deaths. In the past fortnight there has been a 35% reduction each week in the number of deaths among people aged 90 and over compared with a 22% drop among those aged 50 to 59. In addition, the ONS has found that in England, 41% of over 80’s tested positive for antibodies compared with 26% two weeks ago which is most likely due to the higher vaccination rate in this group. The UK government is to set to reveal the possible path on exiting lockdown later today. The number of people vaccinated in the UK reached 17million.

In the US, President Joe Biden said that all Americans will be offered a Covid-19 vaccine before August. Meanwhile, he continues to push a divided Congress to approve his $1.9trillion stimulus package. US retail sales rebounded by 5.3% in January, the largest increase in seven months, possibly boosted by additional Covid-19 relief payments. Manufacturing activity expanded for the ninth straight month despite a shortage of ‘chips’ for the car industry. Producer prices also increased with PPI inflation up 1.3% in January. America’s weather might be very cold but the economy is looking hot. Does America need the Biden stimulus? Inflationary pressures do appear to be building but remain a long way from prompting a response from the Federal Reserve.

Japanese export growth accelerated in January thanks to higher demand from China.

Brent oil remained above $63 supported by stimulus and vaccine hopes as well as by a severe cold spell in North America.

Finally, talking of ultra-cold. The recent cold spell has added to the pothole problem on our roads and the Asphalt Industry Alliance estimates councils have a backlog of £11bn worth of repairs. Last week, the government released a second instalment of £500m from its £2.5bn five-year pothole fund. That is a big financial pothole and only a small wheelbarrow for tarmac!