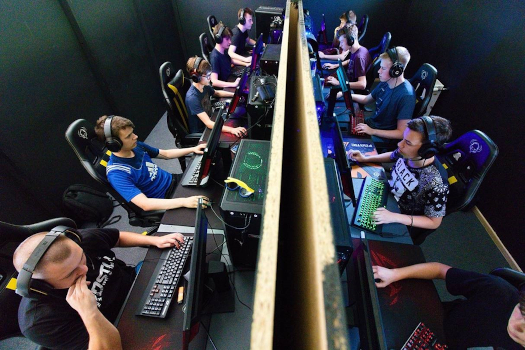 One of the global success stories to emerge from lockdown is the computer gaming sector, which has seen continued strong growth in gaming activity with more of us at home.

The UK is actually at the forefront of gaming software development.  The UK gaming industry is estimated to have reached a record £7bn in 2020, an increase of 30% from 2019 and is forecast to grow to over £10bn by 2023. A number of very successful console gaming software companies are quoted on the UK’s AIM market and the sector has become a major employer.

While the launch of Microsoft’s Xbox X and Sony’s PlayStation 5 have been key drivers, growth momentum is expected to be boosted by the roll-out of 5G. In addition, in the absence of live sport, E-sports have taken off and are expected to be a major growth driver. In 2020, 435million people are estimated to have watched E-sports events. The audiences are, in turn, attracting the attention of major global brands such as Coca-Cola, Gillette and Nike. In 2020, E-sports worldwide revenues from sponsorship deals was estimated to be $947m. E-sports players can also do pretty well with some football competitions offering a prize pool of between $1m-$2m.

Will computer gaming growth slow as more countries exit lockdown and real sports events return and we catch up? Well, not according to industry observers. They highlight the growth of the younger generation globally which will want even more virtual entertainment on their mobile devices. One research report has suggested that global E-sports viewing audience could grow to 577million with revenues of $1.6bn by 2024.

*’Ark at ee’ – Bristolian slang –sarcastic term – ‘listen to him’

US tech stocks got the jitters early last week following comments from US Treasury Secretary Janet Yellen that interest rates may need to rise ‘modestly’ to stop the economy over-heating. This was a somewhat different message from that given by Jerome Powell, Chair of the US Federal Reserve (Fed) the previous week. The yield on 10-year US Treasury stock edged back up to 1.6% on Yellen’s comments before dipping later in the week to 1.5% on weak US jobs numbers. Despite US tech stock weakness, the US industrial weighted Dow Jones index touched a new record high reflecting hopes of a strong global pick-up in economic activity. However, inflation continues to focus minds as copper hit an all-time high, while other industrial metal prices are surging and timber prices have more than tripled from last year’s lows.

Markets are going to be watching guidance from central bankers even more closely now, particularly as economic growth forecasts and forward-looking activity indicators are heading upwards. For example, the Bank of England (BoE) forecast that the UK economy is to grow at its fastest rate since Word War II but indicated its intention to scale back QE. The BoE economic forecast upgrade helped Sterling climb above $1.40.

Despite the grim images from India, markets continued to focus on the successful vaccine roll out in developed countries. However, if anyone needed a reminder of the risk from the Indian variant -the entire Indian delegation in the UK for G7 talks had to self-isolate after two Covid-19 cases were detected. India has said that a ‘double mutant variant’ of Covid-19 first discovered in March may be linked to the deadly second wave. Meanwhile, President Joe Biden has laid out plans to vaccinate 70% of US adults by the 4th of July including having 160million adults fully vaccinated by this date. Meanwhile, in the UK, the over 50-s are to get a booster jab against Covid-19 from September.

The spat between China and Australia continues to grow. China suspended an economic agreement with Australia in an apparent tit-for-tat response to the latter’s scrapping of a Belt & Road infrastructure pact. China- Australia’s biggest trading partner has already imposed tariffs on some of Australia’s biggest industries. Relations collapsed after Australia called for an independent enquiry into the origins of the Covid-19 pandemic and blocked Huawei from building Australia’s 5G network. Meanwhile, China has condemned a joint statement by G7 foreign ministers that expressed support for Chinese-claimed Taiwan and accused China of being guilty of human rights abuses and using ‘coercive economic policies.’

In the UK, the April manufacturing PMI hit a 27-year high with new orders growing for a third straight month. Meanwhile, net mortgage lending rose by £1.8bn in March, the largest increase on record. The Bank of England (BoE), as widely expected, upgraded its economic growth outlook for the UK for 2021 to 7.25% -the strongest growth since the Second World War. The BoE estimates £150bn has been squirrelled away by households during the last year and expects about 10% of this cash to be spent as life returns to normal. While the BoE has maintained its asset purchase programme (QE) at £895bn it has decided to reduce the weekly pace of bond buying now, cutting it from £4.4bn to £2.2bn. Inflation is expected to return closer to target this year as energy prices impact household bills, but other inflationary pressures are expected to be ‘transitory’.

In Europe, the services sector PMI activity indicator was better than expected. The data for April showed the first expansion since August 2020 and the PMI increased to an eight-month high. Eurozone PPI inflation accelerated to a 29-month high of 4.3% in March as energy prices increased sharply.

In the US, the ISM services sector activity index touched 62.7 in April, an eleventh straight month of growth. The April non-farms jobs data was a big surprise with 266,000 new jobs-well below market estimates of 1million! Perhaps a reflection of some low paid workers opting to stay unemployed given government incentives than go back to work? Wage growth was strong and many Us companies have been mentioning the difficulty in hiring in their recent results updates.

In Japan, Tokyo is to extend its Covid-19 state of emergency as new Covid-19 cases remain high with the Olympics that are now less than three months away.

China’s exports were much better than expected in April growing by over 22% while imports jumped by 32%. The data was expected to be strong reflecting the anniversary of the ‘official’ Covid-19 outbreak. However, reflecting the pick-up in global economic activity, encouragingly exports were still up by almost 17% on the 2019 -pre-pandemic level.

Brent oil edged up towards $69 despite the Covid-19 second wave in India which remains the world’s third largest importer of oil. Instead, oil traders focused on positive European economic data.

Finally, never a quiet moment for Boris Johnson. Brexit would not appear done and dusted as France threatened to cut off Jersey’s electricity supplies, as the row over post-Brexit fishing rights between Paris and London deepened. Some 95% of the Channel Islands electricity is supplied from France via undersea cables. Meanwhile, despite success in the Hartlepool by-election and local council elections the PM now has to address calls for a second Scottish independence referendum.