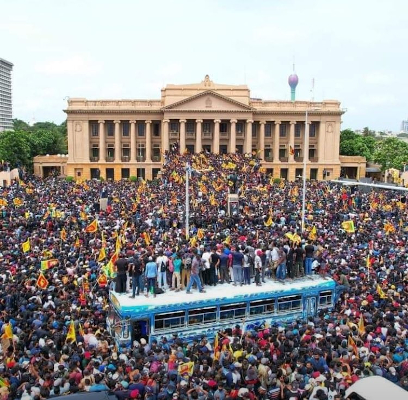 Sri Lanka is in state of emergency. It recently defaulted on its $51bn of international debt in May. A culmination of years of heavy borrowing and tax cuts by the government, plus the damaging economic impact from the Covid.

China has received criticism from the West over its ambitious Belt & Road Initiative (BRI), launched by President Xi Jinping in 2013.

The BRI has provided finance for emerging countries to build infrastructure like ports, airports, roads and bridges. While this has developed trade links, it has also been viewed as a means of providing ‘predatory loans’ or ‘debt bombs’, forcing debt-saddled countries to cede assets if they fail to meet their debt payments. One of the contributing factors to Sri Lanka’s economic crisis is its extensive foreign debts that it had secured for infrastructure projects with China a major provider.

G7 leaders recently announced detailed plans to raise $600bn in funding to rival China’s BRI scheme. The Partnership for Global Infrastructure and Investment (PGII) relaunches a scheme unveiled at last year’s G7 talks in the UK. The plan calls on G7 members to raise $600bn over five years to fund the launch of infrastructure projects in middle and low-income countries. The initiative will be geared towards tackling climate change, improving global health, achieving gender equality and building digital infrastructure. Some of the highlighted initiatives include a solar-powered project in Angola, a vaccine manufacturing facility in Senegal and an undersea fibre-optic cable via Egypt.

The PGII scheme looks different from China’s infrastructure driven BRI. However, Beijing will no doubt look upon the PGII scheme as a clear competitor as it seeks to increase its global influence in some emerging economies particularly those with valuable commodities helpful for supporting China’s long-term economic growth plans.

The West is involved with a ‘hot war’ with Russia in Ukraine which has overshadowed some of the news regarding China. However, President Xi Jinping has laid out clearly his long-term goals for China. Recently, the heads of the FBI and MI5 made an unprecedented joint appearance to warn that China is the ‘biggest long-term threat to our economic and national security.’

Inflation and interest rates continued to dictate the direction of equity markets. The big question is, will the Federal Reserve hike rates by 0.75% or 1%?

Inflation and the pace of interest rate hikes by central banks continued to focus minds. A ‘Hot’ annualised inflation reading of 9.1% in the US was driven by price increases in ‘stickier’ items such as household rents suggesting the US Federal Reserve (Fed) may have to be even more aggressive with the pace of interest rate hikes. Following the inflation news, markets have begun to re-assess the next Fed meeting with at least another 0.75% interest rate hike widely expected but the greater likelihood of a 1% increase. However, it is not just the Fed raising interest rates more quickly as the Bank of Canada surprised markets with a 1% hike, while there were 0.5% increases in New Zealand and South Korea.

The war in Ukraine continued to cast a long shadow. Gas deliveries from Russia to Germany have stopped for 10 days due to planned maintenance work on a key supply pipeline. However, Germany is concerned that gas supplies may not be resumed on July 21st if Putin has his way. This has once again highlighted the key risk for Europe this winter – an energy crisis and the uncertainty saw the euro drop to parity with the US Dollar for the first time since 2002. President Emmanuel Macron also warned that ‘Russia is using energy, like it is using food, as a weapon of war’ and that France should be prepared for having public lights switched off at night this summer/early Autumn.

The head of the International Monetary Fund (IMF) said it will downgrade its global economic growth expectations later this month. The IMF said that the war in Ukraine, higher than expected inflation and the on-gong Covid-19 pandemic are to blame and that the global economic outlook ‘has darkened significantly’. It also confirmed that 75 central banks have raised interest rates in the last year, on average 3.8 times.

In the UK, the Conservative leadership contested is progressing at a faster pace. A winner will be picked by Conservative Party members over the summer with the winner and new PM to be announced on the 5th of September. BRC retail sales data for June confirmed the squeeze on household spending is intensifying. To add to the retail sector woes, the chief executive of energy regulator Ofgem told MPs that domestic energy bills will rise faster this winter than previously forecast. However, there was a positive surprise with May GDP growth of 0.5% with a pick-up in manufacturing, construction and overseas holiday bookings.

In Europe, Mario Draghi’s Italian governing coalition appeared in danger of falling apart as their partner abstained in a confidence vote leading to Draghi saying he would tender his resignation. Yet another cost-of-living driven crisis which saw Italian bond yield spreads over German bunds widen out again. The Italian political situation did not help the euro which was further undermined by a further cut in the European economic outlook with the EU cutting its 2023 growth forecast from 2.3% to 1.4%.

In the US, headline CPI inflation in June was higher than expected at 1.3% making for annualised rate of 9.1% – a fresh 40-year high. Core goods inflation fell back slightly but the headline number continued to be pushed up by the persistent strength in household rents. The Fed’s Beige Book suggests recession fears are spreading across more parts of the US most companies expecting pricing pressures to persist at least through the end of the year.  Following the inflation news, the chances of a 1% rate hike at the end of July have increased to over 80%. US retail sales increased by 1% in June after a soft May although some of the growth reflects consumers paying higher prices.

China’s economy slowed sharply in the second quarter as expected due to lockdown restrictions, contracting by 2.6% with the June activity reading suggesting a modest rebound. The continued rise in new BA5 cases of Covid-19 has raised fears of the re-imposition of strict lockdown measures as millions of Shanghai residents underwent mass testing once again.

Despite concerns about fresh Covid-19 cases in China and prospect of even higher US interest rates, Brent oil recovered to $102.

Finally, just as the first hot spell arrives and BBQ season gets well underway. Calor Gas, the UK’s leading supplier of LPG appears to be running low on stock and has halted sales of gas cannisters to power barbecues on its website, citing high demand and supply chain problems. One caravan park has already warned supply has become so patchy that it might be forced to cancel some bookings. If you can’t cook, then at least no danger of piling on the calor-ies!