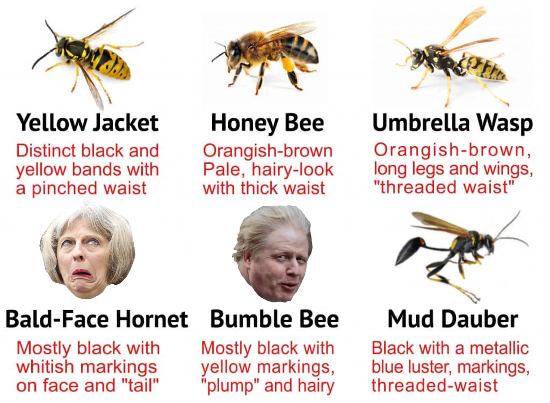 You may not be surprised to hear that the Met Office has confirmed 2018 was the joint hottest summer on record for the UK as a whole and hotter than the sizzling summer of 1976 for England.  However, according to the British Pest Control Association, the recent heatwave resulted in a significant increase in the number of one our least favourite pests – wasps.

However, like bees, wasp numbers have been in long-term decline, with a reduction of 50% in 20 years – and most wasps are also key to pollination, just like bees.

Globally, as temperatures have risen, so have overall insect numbers. Scientists estimate that insect pests could eat between 10%-25% more wheat, rice and maize for each one degree rise in climate temperature.

How do we control pests, but actually protect nature’s pollinators? One of the problems with pesticides, is that harmful insects appear to be becoming more resistant to them in a warmer climate. The agricultural industry may need to shift to using more biological means of controlling pests such as natural predators such as ladybirds. Other measures might include shifting planting dates, rotating crops and planting those that are more resilient to pests.

Separately, the UK government has issued a warning for the Asian hornet which, is capable of killing up to 50 honey bees a day. Any possible sightings should ‘bee’ reported so action can be taken to eradicate the Asian invader.

The Conservatives are holding their party conference this week. Will PM Theresa May or Boris Johnson ‘bee buzzin’ at the end of it?

Another week overshadowed by US interest rate policy, global trade tariffs, soft Chinese manufacturing data, Brexit, Italy and a United Nations summit. However, there was some positive trade news.

Canada and the US reached a new trade agreement, the United States-Mexico-Canada Agreement (USMCA) which replaces the previous NAFTA deal. Canada has made some concessions on its dairy industry, there is a side-agreement on auto tariffs while a dispute settlement mechanism will remain in place.

United Nations delegates actually laughed at the US President as he talked about his achievements so far during his presidency. President Trump went on to praise North Korea, a complete U-turn from a year ago. Then it was back to business as normal with Trump verbally attacking OPEC, the World Trade Organisation and Iran. Trump also accused China of interfering with the US mid-term elections which is unlikely to help the current trade tariff dispute.

The Labour party conference confirmed that if it won the next general election that besides privatising public utilities such as water companies it would force businesses to hand over 10% of their equity to employees. Carolyn Fairbairn, CBI director-general said ’this would encourage investors to pack their bags’ adding ‘if investment falls, so does productivity and pay’.  Shadow Chancellor John McDonnell also confirmed that private sector PFI contracts would ‘be taken back in-house’. One analyst has calculated this might require £175bn of gilt issuance to fund which would result in a higher cost of government borrowing. Last week’s developments in Italy should be a good reminder of the markets view of higher spending and borrowing!

Turning to Brexit, more UK companies are starting to highlight their concern about a ‘no deal Brexit’. Retailer Next highlighted the preparedness of the Customs authorities as the biggest indirect risk to its business, given the potential interruption to the smooth operation of British ports and the flow of goods. Meanwhile, the International Air Transport Association was less than impressed with the government’s papers covering the implications of a ‘no deal Brexit’ of on air travel, highlighting the huge amount of work that would be required to maintain vital airlinks.

European Central Bank (ECB) President Mario Draghi said the eurozone inflation ‘is expected to increases further over the coming months’ bringing forward expectations for the first interest rate hike in 2019.  Germany’s BDI industry association lowered its 2018 economic growth forecast from 2.25% to 2% due to uncertainty created by the escalation of the trade conflict between China and the US, given German industry is very dependent on exports.

Italy’s new government has defied Brussels and agreed to set its 2019 budget deficit at 2.4%. This will increase the structural imbalance of the country’s finances and while a defeat for Italy’s Finance Minister, he has agreed to stay in office to avoid market stress. After Greece, Italy has the second highest level of debt to GDP at 132%. The cost of borrowing for the Italian government jumped in 24 hours, with the 10-year bond yield moving from 2.88% to 3.25%.  Italy’s banking sector saw big share price falls which had a domino effect across the wider European banking sector.

US consumer confidence goes from strength to strength, touching an eighteen-year high. The US Federal Reserve (Fed) increased interest rates by 0.25% as expected, has pencilled in another 0.25% hike in December and is signalling three more increases in 2019. One further hike may be made in 2020 which would return the target rate to 3.4%. Significantly the word ‘accommodative’ was removed from the Fed statement covering monetary policy. The Fed increased its US economic growth forecast for 2018 from 2.8% to 3.1% and for 2019 from 2.4% to 2.5%.

Meanwhile, US companies, taking advantage of Trump’s tax cuts and Dollar strength against Sterling, continue to ‘hoover up’ UK prize assets. Following Coca-Cola’s recent £4bn purchase of Costa Coffee, Sky is being acquired by Comcast for £30bn. The value of such US/UK deals more than doubled in 2017 to £79bn and takeover activity shows no sign of abating in 2018.

Turning to emerging markets, the Argentinian crisis deepened as the new head of the central bank quit after only three months sending the peso down by 5%.

Chinese manufacturing activity indicators were disappointing, touching a 15-month low and reflecting the uncertainty created by US trade tariffs.

Brent oil climbed to a four-year high of over $82 as traders reflected on Russia and OPEC’s intention not to increase output just as Iran’s output is set to drop due to US sanctions.

Finally, John Macfarlane, Chairman of Barclays, commenting on payment protection insurance (PPI) said, ‘the percentage of fraudulent claims is enormous’ and added ’we have turned portions of Britain into fraudsters’. He went on to say that the UK economy had effectively been stimulated by consumer spending on flat-screen televisions. Consumer champion Martin Lewis, founder of MoneySavingExpert.com responded by saying ‘I find this a very rich comment from a banker. £50bn was mis-sold yet no banker has been convicted of fraud’……….  ‘Touche Monsieur Pussycat!’