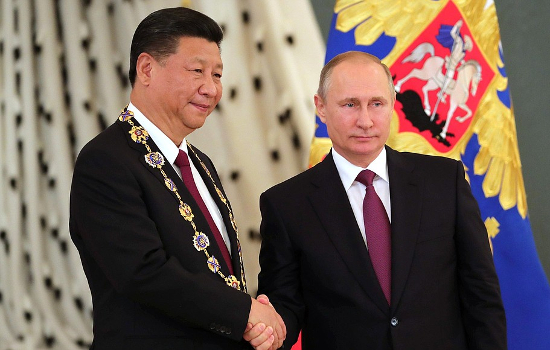 Xi Jinping and Putin – What are you cooking up?

At a time of increasing tension between the East and West, Russia recently carried out its largest war game since the fall of the Soviet Union. The military training exercise, Vostok 2018, involved some 300,000 troops, including joint exercises and units from China. As both countries come under pressure from the US through sanctions and tariffs, Russia and China have taken steps to build stronger strategic relations. NATO has responded by increasing its deployment of forces in eastern Europe and calling Vostok-2018 a demonstration of Russia’s focus on exercising large-scale conflict.

Russia continues to suffer from western sanctions since its annexation of the Crimea from Ukraine in 2014. It also follows the Salisbury Novichok attack where two Russian nationals have been named in the attempted murder of Sergei Skripal and his daughter Yulia. The US has already imposed its toughest sanctions to date on Russia following the Salisbury nerve agent attack.

China, is caught up is an escalating trade war with the US, but is seeing its trade with Russia boom and is expected to top $US100bn this year. Meanwhile, the US has imposed sanctions on the Chinese military after its recent purchase of fighter jets and missiles from Russia. Talks between President Xi Jinping and President Vladimir Putin have recently ramped up, with their third face-to-face meeting in four months.

Russia and China entering a new era of relations, comes at a time of increasing pressure on emerging markets and economies. A ‘desirable world order’ between the two super powers only adds to the challenges for global investors.

President Trump went ahead with his much-publicised additional round of tariffs on Chinese goods. America has slapped a two-stage tariff, starting at 10% on $200bn of Chinese imports which, will rise to 25% next year. He has threatened tariffs on a further $268bn of Chinese imports if Beijing retaliates against American farmers and businesses. China has said that it will impose tariffs of 10% on $60bn of US goods from today. Elsewhere, NAFTA trade talks between the US and Canada are ongoing with automotive components remaining a sticking point.

Economics professor Nouriel Roubini who, predicted the 2008 financial crisis, warned the latest tariffs are an ‘extremely regressive tax’ on the US, in that the cost is likely to be passed onto less well-off American consumers. Any company that complains to the President about tariffs on components made in China is told to move production back to the USA which is far easier said than done. Meanwhile, Alibaba chairman Jack Ma warned that trade tensions between the US and China could last for as long as two decades.

The uncertainty from the trade tariff tit-for-tat and potential inflationary impact on the cost of some US consumer goods from higher cost Chinese components moved the 10-year US Treasury yield back above 3%.

PM Theresa May’s Chequers plan was rebuffed by EU leaders which adds to the mounting pressure on her in the run up to the Conservative party conference at the end of this month. At a press conference back in London, the PM confirmed the UK and EU ‘are at an impasse’ and repeated that ‘no deal is better than a bad deal’. Sterling, which had rallied above $1.32 ahead of the meeting with EU leaders, dropped back below $1.31.  The Irish border and trading relationship with the EU remain key challenges to be addressed.

Meanwhile, with time fast running out, companies are beginning to reveal ‘no deal Brexit’ contingency plans. For example, BMW has announced that it is bringing forward the summer 2019 shutdown of its Mini factory in Oxford for a month after Brexit day which is likely to have a serious knock-on effect across its supply chain. We already know pharmaceutical companies are stockpiling key drugs and that aerospace companies are building up higher levels of inventories to cope with any possible disruption. In addition, Unilever is seeking shareholder backing to relocate from London to Rotterdam which could see it drop out of the FTSE 100 index. We are also aware of an AIM quoted software company that like Unilever, is contingency planning with a potential re-domiciliation to the EU. We note a number of other UK companies already establishing or ‘beefing up’ European manufacturing or research facilities in preparation.

UK inflation data caught investors off guard, with the targeted inflation rate rising from 2.5% to 2.7% in August, well above consensus expectation of 2.4%. The main drivers included theatre admission prices, air fares and clothing. Despite the overshoot against Bank of England (BoE) expectations, it is doubtful we will see interest rate rises anytime soon as the BoE remains in ‘wait and see mode’ on Brexit. According to the Office for National Statistics, UK retail sales increased by 0.3% in August.

Despite higher US oil inventories, Brent oil edged up to $79 as traders speculated that Saudi Arabia may be comfortable with a higher oil price and might not raise production to offset a shortfall in supply from Iran as US sanctions start to bite in November.

Finally, Tesla founder Elon Musk’s other company SpaceX has announced the first space tourist it plans to fly around the Moon in 2023, a Japanese billionaire. The only catch is that this is reliant on a rocket that has not been built yet. Let’s hope this proves to be smoother than Tesla which, following production issues with its Model 3 car, is now in ‘delivery logistics hell’ according to Elon Musk.