Can a robot do my job? 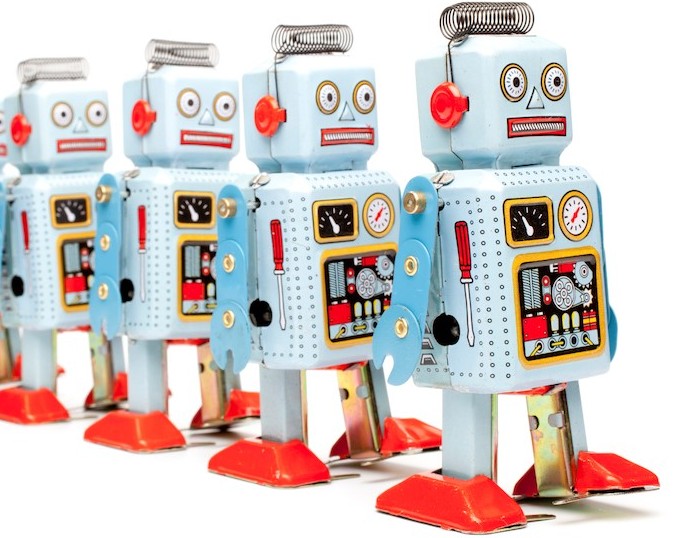 The BBC recently presented a week long feature on artificial intelligence and whether people’s jobs were at risk of being replaced by a robot. Which got us thinking. Could our jobs at Alpha be at risk from robots?

Global markets, but in particular the USA, have seen significant growth in algorithmic investment. Basically, a person no longer decides where to invest your money but a computer does instead using an algorithm, based on lines of code. Some algorithms analyse earnings statements and news reports to predict how investors and markets may re-act. Given computers can analyse data much faster than humans, then electronic share prices can move in nanoseconds it is not surprising that high-frequency trading (HFT) has suddenly taken off.

This has tended to shorten investment timescales for some investors further making markets and some share prices even more volatile. HFT is liquidity driven and the increased volatility has created a headache for regulators. In the US, regulators have had to implement a raft of measures including single stock circuit breakers. High-frequency trading can also be very costly. In 2012, a US market maker was reported to have lost over $400m in 30 minutes trading due to a computer glitch!

So, are our jobs at Alpha at risk from robots? Hopefully not! We are long-term investors, looking to add value through thorough research knowledge and expertise. We carefully select investments and try to think ahead for possible ‘bumps in the road’ as well as possible opportunities. Furthermore, some of the companies we invest in can be quite tricky to deal in and sometimes it’s knowing where and how to transact business in a share. Sometimes we have to be patient and disciplined over entry price level and it can take a while to build up a material holding in a chosen investment. While we monitor our investments minute by minute, we look to invest in our chosen shares and funds on a long-term view and are more interested in performance over one, two or three years or longer, rather than nanoseconds. The other issue is that the herd is not necessarily always right. Short-term movements aren’t always a good indication of long-term performance and taking a contrarian view can sometimes really pay dividends!

Markets continue to be guided by central bankers. Following the previous week’s comments from the ECB, President Mario Draghi failed to play down expectations for further stimulus measures, describing it as ‘an open question’. In the US, Fed Chair Janet Yellen cautioned that December would be a ‘live possibility’ for an interest rate rise, if incoming data supported that expectation. By comparison the BoE was ‘dovish’ in its ‘Super Thursday’ interest rate/inflation/MPC minutes with Governor Mark Carney suggesting interest rates would rise in 2016 but we suspect sometime after the US Fed moves. Not surprisingly, Sterling dropped against the US Dollar but strengthened against the Euro. Probably a ‘Super Thursday’ for UK consumers and borrowers but perhaps not so super for savers?

In the UK, a leading nationwide estate agent commented that despite generally encouraging economic conditions, an anticipated post-election recovery in transactions had failed to materialise in any significant way. A key constraining factor in the current market is the availability of stock, with the shortage of properties coming onto the market. Quoted estate agents and housebuilders dropped on the news with the latter also affected by concern about the return of build cost inflation. The UK services sector expanded for the first time in four months during October, no doubt benefiting from higher consumer disposable income although the outlook was the weakest since mid- 2013. The UK manufacturing sector picked up slightly in September but output was still marginally below that of the same time last year.

The BoE left UK interest rates unchanged and confirmed no change in QE. It did however, trim GDP growth forecasts to 2.7% for 2015, 2.5% for 2016 and 2.7% for 2017. Inflation is expected to stay below 1% until the second half of 2016 as a result of lower energy and food prices. The general message appeared to be don’t expect a rate rise given the strength of Sterling and unless the global economy, commodities and inflation pick up significantly next year. The BoE said that ‘the path for interest rate rises implied by markets has fallen by 40bps’ suggesting rates will rise to only 1.25% by 2018.

In Europe, the VW scandal continues to escalate with the company admitting that it had discovered problems involving emissions on 800,000 cars including some petrol engines. German factory orders unexpectedly extended a series of declines in September amid a slump in demand for investment goods. Nevertheless, the EU forecast that economic recovery within the Eurozone should continue at a modest pace. The EU is forecast to grow by 1.9% in 2015, 2% in 2016 and 2.1% in 2017.

In the USA factory orders dropped by 1% in September but was in line with market expectations. Fed Chair Janet Yellen said the US economy was performing well and was expected to continue to grow at a pace that would return inflation to the central bank target over the medium term. She added that December would be a live possibility for a rate rise if incoming data supported that expectation. Subsequent US jobs data was better than expected with the unemployment rate dropping to 5% in October. Markets suggest it is more likely than not, that US interest rates will rise in December. The US Q3 earnings season is coming to a close and even as the US economy picks up most of its largest firms are in the doldrums due to the strong US Dollar and weak emerging markets. Sales fell by about 4% and earnings per share by about 2%.

China announced the 13th Five Year Plan which re-emphasises the target to maintain medium to high levels of growth with Premier Li reported to have said that 6.5% annualised growth would be necessary to fulfil this target and achieve a well-off society by 2020. In the meantime, there was positive data from the services sector which moved firmly into expansion in September, recovering from a 14 month low.

Oil briefly broke back above $50 following news of supply disruptions in Brazil and Libya before drifting lower again. All eyes will now be on the next OPEC meeting in early December. In the meantime, senior officials in Saudi Arabia have said that it intends to continue pumping enough oil to protect its market share. The Chairman of Saudi Arabia’s state-owned oil company said ‘The only thing to do now is to let the market do its job’. He suggested the market may come into balance in 2016 and then demand would start to suck up inventories and oil stored on tankers.

Finally, following last week’s ‘Alpha Bites –No Energy?’ news that last Wednesday, National Grid was forced to call on emergency generating capacity due to a lack of wind! Besides having to buy electricity from Ireland at a massive price premium, more than 10% of Britain’s electricity needs during last Wednesday night’s power crunch came from coal fired power stations. These will no longer be available next year due to new European environmental legislation! Anyone know a quoted candle maker?