A Taste of Things to Come? 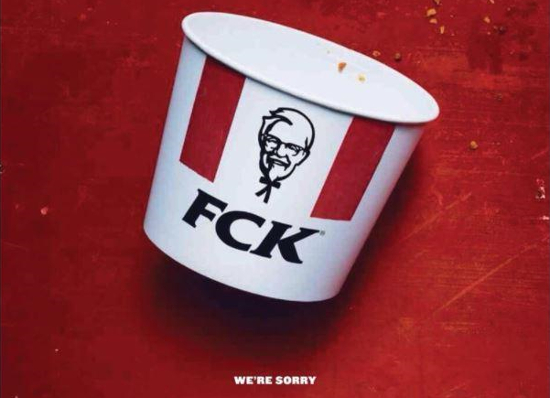 #Chickengate A lack of chickens is a serious issue for a company whose business model relies on selling fried chicken! Delivery problems meant that at the peak of the chicken crisis, more than 600 KFC outlets were forced to close last week, while others offered a reduced menu or shortened hours. KFC recently switched its delivery contract to DHL, which blamed ‘teething problems’ for the supply disruption.

It is a useful reminder, that even large nationwide retailers and leading global logistic companies are vulnerable to supply chain disruption. Perhaps more disturbingly, could this be a taste of things to come, were the UK to see a hard Brexit? If the UK were to leave the EU Custom Union, then we might see cross border lorry checks, restrictions on plane flights, as well as problems arising from a lack of customs officers to cope with the additional administration burden. Given how much of our food, besides other goods are imported into the UK, might we see some empty supermarket shelves as some doomsters predict? UK industry is also concerned about possible supply chain disruption. Modern manufacturing relies on ‘just in time’ production with very short supply chains to reduce working capital to a minimum. No wonder the Japanese car manufacturers with large plants in the UK are nervous about the Brexit process.

It is worth remembering that the UK is part of a larger global supply chain. This is why UK manufacturers would prefer a smooth trade transition period post Brexit. When it comes to the Brexit process let’s hope it doesn’t ultimately come down to a game of chicken between the UK and EU.

‘Beast from the East’. For once not a Brexit issue, but a Siberian snow storm due to hit the UK this week.

With Chinese New Year and President’s Day in the USA, last week got off to a quiet start. However, things livened up after the Federal Reserve (Fed) published its latest thoughts on US interest rate policy which saw US bond yields rise.

Last week in Alpha Bites we highlighted US Treasury issuance and its ramifications for bond yields. On Tuesday, the US Treasury sold $179bn of debt securities which included $28bn of 2-year notes with a yield of 2.25%, the highest level for some 10-years.

We recently highlighted President Trump’s America First policy and protectionism risk. Last week, a European Commission spokesperson said the EU is deeply concerned by any US trade sanctions impacting EU businesses. They added ‘we would be taking appropriate measures to defend EU industry and we stand ready to react swiftly in case our exports are affected by restrictive trade measures from the US’. The Winter Olympics ended with a North Korean olive branch, but in the meantime, President Trump has launched the ‘largest ever’ set of new sanctions against North Korea.

Turning to Brexit, the governor of the Bank of England, Mark Carney noted a transitional deal to be reached before the end of March ‘obviously won’t be a hard, legally binding agreement but something that has legal text associated with it… that should be good enough’. PM Theresa May is expected to set out her vision for a Brexit trade deal after extensive cabinet discussions. Her task has been made more difficult by an open letter from 62 Eurosceptic Conservative MPs insisting on elements of a hard Brexit just as hope was emerging that she could find a united cabinet position. Meanwhile, Jeremy Corbyn is expected to confirm his support for the UK’s permanent membership of a customs union after Brexit in March 2019. Given this and the Conservative MPs who agree with Labour, PM Theresa May has a herculean task trying to keep all factions of her party happy.

In the UK, employment data pointed towards some evidence of firmer pay trends with average weekly earnings in the private sector up by 2.6% in December. Mark Carney, governor of The Bank of England said ‘we are seeing a variety of indicators that are consistent with the firming of wage pressures’.

In Europe, it all remains a bit political. In Germany, SPD members are voting as to whether to enter into a coalition with Mrs Merkel. However, there were press reports that the far right AfD party has overtaken the SPD in the polls for the first time. Are the electorate punishing the SPD for entering talks with Mrs Merkel? The fact that the far right in Germany are now second in the polls is fairly remarkable really. Continuing with politics, ahead of the 4th March national election in Italy, the risk of a hung parliament appears to remain high but the centre-right coalition is closing the gap to get an outright majority. Given all parties are pledging significant expansionary policies and Italy does not comply with EU fiscal rules currently then Rome could be on a collision course with Brussels.  Meanwhile European ‘flash’ manufacturing activity indicators were a fair bit below expectation but remain at solid levels.

In the USA, the Fed published its latest thoughts on interest rate policy. This indicated that ‘a majority of participants noted that a stronger outlook for economic growth raised the likelihood that further gradual policy firming would be appropriate’. The members of the Fed are more optimistic about US economic growth while they expect overall inflation to move up this year and stabilise around 2% over the medium term. The 10-year US Treasury yield, at one stage rose to 2.95% on these comments. Investors will be focusing this week on new Fed Chair Jerome Powell’s inaugural testimony. Despite the uncertainty, US companies appear to be doing well with FactSet reporting fourth-quarter earnings overall across S&P index constituents ahead of expectations. With the benefit of President Trump’s tax cuts, forecast growth in US company earnings per share in 2018 has been upgraded from 10% to 18%.

Brent oil held around $67 after the latest energy report showed an unexpected drop in US oil inventories.

Finally, why did the chicken cross the road? We suggest you contact the public relations departments at either DHL or KFC.

We would also like to advise you that we have been successful in being shortlisted for the City of London Wealth Management Awards (COLWMA) 2018 in the following categories:

Voting is now open for COLWMA until the 7th of March if you would like to vote for us!

If you enjoy reading our weeklies as much as we like writing them, we would be very grateful if you could take a few minutes to vote for us under the ‘Best Market Newsletter’ and ‘Best Discretionary Service’ categories.