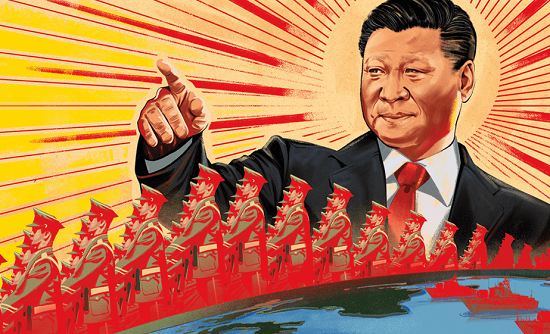 The US recently said it was ‘very concerned’ by China’s ‘provocative’ actions after Taiwan claimed a record number of Chinese military aircraft had flown into its air defence zone.

However, China has a more subtle strategy in a new ‘Cold War’ against the West.

BBC2 recently broadcast a documentary about a Chinese Communist Party department that is officially called The United Front Work Development (UFWD). President Xi Jinping calls it China’s ‘magic weapon’. The UFWD focuses its social influence on people that are outside the Party and especially the overseas Chinese community. However, former U.S. Secretary of State Mike Pompeo has accused UFWD of coercing and bullying “those who would oppose Beijing’s policies.”

The UFWD was created during the Chinese Civil War but now President Xi is reported to be using the UFWD to spread Chinese influence around the world and to obtain know-how, especially military technology. China also expects Chinese expatriates to work on its behalf.

The documentary concentrated on a number of events in Australia, the US and the UK including Oxford University and research into quantum computing. A Chinese student who was actively involved in the research programme was found on returning to China to have filed a number of patents relating to quantum technology through the National University of Defence Technology (NUDT) or People’s Liberation Army National University of Defence and Science Technology.

Australia has changed its laws to combat foreign interference and America believes eight out of ten industrial espionage cases now involve China. Meanwhile, The Times has called for an inquiry into Chinese tech giant Huawei’s close ties to a research centre at Cambridge University.

Today, China has a significant involvement in the UK’s infrastructure. China’s goal under President Xi Jinping is to be the world’s leading super-power within 30-years. Some of this will be achieved through transformational projects such as the well-publicised Road & Belt Initiative, but it also looks as if China intends continuing to use its ‘magic weapon’.

Inflation worries driven by higher energy price and supply chain disruption continued to overhang markets. Global bond yields ticked up on inflation concerns, with the US 10-year Treasury yield hitting a 3-month high of 1.6%, while the UK 10-year gilt yield hit a 2-year high of 1.1%. This was triggered by the growing fear of a global energy crisis as Brent oil hit a 3-year high and European coal prices hit a 13- year high. The European gas market was also in turmoil with the UK gas price spiking to 400p per therm at one stage before dropping as Russia said it could supply more gas. Both India and China have been buying thermal coal as stocks run low while China has also been purchasing more LNG shipments. Central banks appear to be shifting their view on transitory inflation and are starting to acknowledge that upward pricing pressures are set to persist for longer than initially expected.

The IMF expects global economic growth to slightly underperform its earlier forecast on the back of risks associated with debt, inflation and diverging growth between developed and emerging economies. It is not just higher energy prices creating inflationary challenges for central banks but food as well. The UN’s world food price index climbed to a 10-year high amid higher input costs and supply chain bottlenecks.

In the UK, new car sales plummeted by 35% year-on-year in September amid a global semi-conductor chip shortage. Activity in the construction sector also dipped in September due to a lack of building products and transport issues. The spike in gas prices is partly cushioned by the regulatory price cap, but is likely just deferring a bigger hike for UK households until Spring 2022, while a report suggested council tax was likely to need to rise above inflation for the next three years. With the prospect of higher interest rates next year, the headwinds for UK households are building. The Bank of England said that inflation is likely to be higher for longer. Short end Sterling futures are now forecasting UK interest rates at 0.75% by September 2022 with the first rise likely in February 2022.

In the US, the proposed $3.5trillion social care and climate change package may be trimmed to between $1.9-2.2trillion in an effort to get the legislation through Congress. Once the bill is approved, legislators will vote on the separate $1trillion infrastructure bill. Meanwhile, Senate minority speaker Mitch McConnel proposed a debt ceiling compromise that would avert a government debt default and give Democrats time to find a longer term solution.  The US employment report was sufficiently mixed to revive the debate over whether the Federal Reserve will go ahead with the planned tapering, however, given another fall in the unemployment rate to 4.8% this would still appear possible in November.

In China, Evergrande contagion fears intensified as another smaller property developer was reported to have defaulted on interest payments. Meanwhile, nine provinces in China have placed Evergrande housing projects under state management, suggesting the start of the developer’s ‘controlled demolition’.  Elsewhere, iron ore prices continued to fall as Chinese regulators banned the use of bank loans and finance from commodities futures speculation.

Brent oil briefly touched a 3-year high of $84 as OPEC+ stuck with its existing output plans and Asian buying drove up the price of thermal coal and natural gas.

Finally, given the spike in gas prices it is a reminder of just how dependent Europe is on Russia for gas, which is a disturbing thought given the deterioration in relations with President Vladimir Putin. Meanwhile, there is a global shortage of semi-conductor chips the greater part of which come from manufacturers in Taiwan. Last week Taiwan warned that China could have the capability to invade by 2025. It appears markets have more to worry about these days than Covid-19!