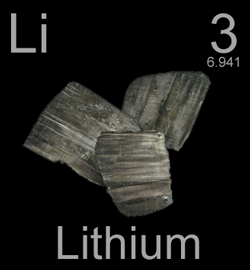 In the popular BBC series ‘Poldark,’ Ross Poldark tries to build his fortune on copper and tin mining in Cornwall. Sadly, for him he was potentially sitting on something that today is far more valuable, lithium (Li). Lithium is a comparatively rare element, and has been found in granite and natural hot underground springs. The Cornish tin mining region is believed to contain potential lithium brine deposits.

The development of lithium ion batteries for smartphones and electric vehicles is driving demand and the price of battery-grade lithium has risen sharply. With some projections suggesting that up to one-third of cars could be electric powered by 2040, it is not surprising that some mining experts are forecasting that global demand for lithium could treble in the next 10 years. At present, the world’s leading producers are Australia, Chile, China and Argentina.

Tempted by a potential £50bn opportunity, private venture Cornish Lithium has been formed to secure seed capital to explore some 74,000 acres of Cornwall for lithium bearing water deposits. This would represent the largest single unified exploration project in Cornwall’s history. Could this create a whole new industry in the far South-West? In the new brave era post Brexit, the UK should be better placed to develop new export industries and if successful, the Cornish economy would no doubt welcome the potential jobs this could create.

The US equity market touched a fresh high despite the new administration political problems which prompted Donald Trump to hold a press conference in which he claimed the White House is ‘running like a fine-tuned machine’.

US bank stocks led the way as positive economic data suggested interest rates might be on an upward path possibly as early as March. The wider US market remained firm in anticipation of Trump’s plans to shake up the US corporate tax regime including a possible border adjustment tax. However, there are some who are concerned about inflation and that the market has become too optimistic about the Trump economic growth plan. Lawyers for the EU and other trading partners are reported to be laying the groundwork for a legal challenge to the US border tax proposal that would trigger the biggest legal case in World Trade Organisation history.

In the UK, it was a very quiet week due to the half-term holiday until Kraft Heinz announced it had made a bid approach to one of the UK’s largest quoted companies, Unilever, valuing it at over £115bn. However, over the weekend Kraft, which is backed by major shareholder Warren Buffet, announced that it had amicably agreed to withdraw its proposal presumably on the basis that a prolonged bid-battle would have been damaging to both businesses. The fall in Sterling post the Brexit vote has made UK companies with global operations, cheaper to buy for US predators and we could well see more UK companies getting approaches from overseas buyers.

Consumer price inflation climbed to 1.8% in January, the highest level since mid-2014 although less than the market and Bank of England had expected. Factory gate prices continue to rise as input prices climbed to the highest level since 2008 as a result of weak Sterling. Inflation pressures are expected to continue to build and it is now a question of how quickly and to what extent companies pass inflationary cost pressures onto UK consumers. Retail sales slipped back unexpectedly in January, following on from December’s dip, perhaps the first evidence of higher inflation discouraging potential shoppers?

In Europe, the Greek economy suffered a surprise contraction in the final quarter of 2016 which is likely to embolden critics within the Greek government who have long argued the economy cannot endure another round of austerity. Meanwhile, Italy is reported to be looking at a 5bn euro rescue of two regional banks.

In the USA, Fed Chair Janet Yellen’s job may be even more difficult than usual given the uncertainty about Donald Trump’s economic plans. Her prepared remarks last week and response during the following press conference confirmed that the Fed is reluctant to prejudge the impact until concrete proposals are available from the new US administration. Markets viewed her comments as ‘moderately hawkish’. Subsequently, consumer price inflation in January was higher than forecast taking the annualised rate to 2.3% while US retail sales also grew more strongly than expected last month. These two sets of economic data have intensified the speculation about a potential US interest rate hike in March. US interest rate futures currently suggest a 44% chance of a March rate rise and 61% chance in June.

China released January inflation data which showed the highest reading since mid-2014. However, it was producer price inflation that stood out at 6.9%, the fifth consecutive monthly increase.

The Japanese economy grew at an annualised 1% in the fourth quarter of 2016. The Bank of Japan appears confident that the economy will continue to grow solidly in 2017 but weak inflation suggests it is likely to maintain its current loose monetary policy.

A report from OPEC suggested that production cuts could ease an oil market surplus faster than expected in 2017. However, OPEC still faces an uphill struggle due to renewed drilling activity by US oil producers.

Finally, in May last year Alpha Bites University Challenge highlighted the growth in students studying science, technology, engineering and maths in Asia. Last week, Sir James Dyson, a prominent Brexit supporter said his company had decided to open a dedicated $400m research centre in Singapore. When interviewed, he said ‘In Singapore 40% of all graduates are engineers and scientists. In England, it is 4%’.