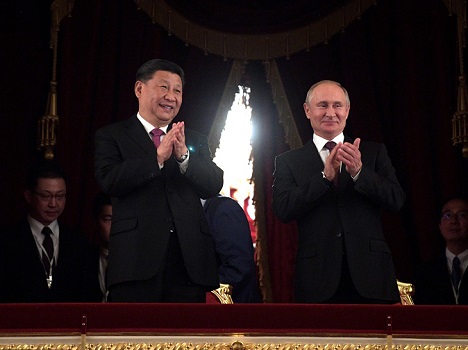 The Russian invasion of Ukraine has highlighted the relationship between President Vladimir Putin and President Xi Xinping. The latter was reported to have asked Putin not to invade Ukraine until after the end of the Winter Olympics!

However, while Russia and China appear to be growing closer, things do not appear to be as cosy between the US and China.  During Donald Trump’s presidency, trade wars and tariffs dominated headlines. Unlike President Trump, the Biden administration is not threatening a re-escalation of the trade war and imposition of new tariffs on billions of dollars of trade. However, the US has accused China of causing ‘serious harm’ to workers and firms around the world and the new US Trade Representative Katherine Tai believes Beijing has repeatedly failed to live up to its trade commitments.

America recently published its annual review of China’s compliance with the deal that gave it membership of the WTO. The report said that ‘China’s embrace of a state-led, non-market approach to the economy and trade has increased rather than decreased over time and, the mercantilism that it generates has harmed and disadvantaged US companies and workers, often severely.’ It also points out that the US has won all 27 cases it has brought against China at the WTO but that ‘meaningful reforms remain elusive.’ China has said it is a firm supporter of and important contributor to the WTO.

Over half of what each country sells the other is thought to be subject to tariffs or import taxes. Despite this trade between the two countries climbed to $650bn last year. Despite Trump’s phase one trade deal agreed in 2020, the US believes that China is buying less from it than it was five years ago.

Clearly the global Covid-19 pandemic has not been helpful. US farmers and manufacturers have struggled to produce enough goods for the target to be met while American consumers appear to still have an appetite for cheap Chinese goods. Part of the imbalance is the fact that China has not moved to a consumption-led economy and is still both export and production-led. China needs to fulfil its move towards making its economy more dependent on consumer spending. Clearly, China has bigger domestic challenges with Omicron and its struggling property development sector.

Given the US and China are the two biggest economies in the world,  the trade relationship between them is important to all of us.

A full-blown invasion of Ukraine by Russian forces rattled global markets. However, has President Putin seriously mis-calculated the re-action from the West? Alarmingly, Putin has ordered his defence chiefs to put Russia’s nuclear ‘deterrence forces’ on high alert.

Given the scale of the uncertainty, markets were volatile and gyrated with news and developments. However, the UK market, having fallen sharply on Thursday then took its lead from Wall Street and recovered most of the lost ground on Friday. It actually finished the week little changed. Last week the Vix (volatility index), a measure of the expected volatility of the US S&P 500 index over the next 30 days, was at its highest level since October 2020. Gold jumped to an 18-month high on Thursday, but fell back on Friday.

Putin’s chilling nuclear instruction seems to be a reaction to a series of setbacks as well co-ordinated actions by the West which have been ramping up sanctions. The first surprise might be the strength of Ukrainian resistance to the Russian invasion. The second surprise might have been how NATO and the EU has come together with the UK and US. Even Germany is to supply arms to Ukraine and is now planning to step up defence spending materially. The Russian Ruble has collapsed and there are stories of a run on some Russian banks. Russian interest rates have jumped from 9.5% to 20% in attempt to prop up the currency. The West has blocked a number of Russian banks from the SWIFT settlement system while the overseas assets of Russia’s central bank have been frozen.  Russia is finding itself increasingly isolated – even BP is exiting its investment in Russian oil giant Rosneft.

How will Putin dig himself out of the hole he has created? Given power and image is everything in Russia – is the nuclear option a sign of how his plans have unravelled so quickly? Could Putin adopt more desperate measures to get his way? He was once quoted as saying ‘Why do we need a world without Russia in it?’

China will also be watching developments in Ukraine and perhaps noting the co-ordinated response from the West given its own issues with Taiwan and recent incidents in the South China Sea.

What does this all mean for investors?

The world has suddenly become a much more dangerous place. Putin and Russia’s nuclear arsenal is disturbing and will create uncertainty and lead to increased risk aversion in the near-term.

More sanctions are being imposed on Russia by the West and this is likely to have an adverse impact on global economic growth in the very near term and could also be inflationary. However, at the moment the West has not gone all-in and oil and gas supplies have not been targeted directly.

Russia is a leading producer of a number of key commodities.  Russia is the world’s third largest producer of oil after Saudi Arabia and the US. OPEC+ is increasing output but the market is tight as there is not much spare production capacity. Russia is the world’s second largest producer of natural gas and supplies 40% of Europe’s requirements. Ukraine and Russia produce 30% of the world’s wheat. In addition, Russia is also a leading supplier of other key commodities such as copper and palladium.  European and UK businesses and consumers could be impacted by continued high petrol and energy bills as well as higher food prices. As an aside, Australian wheat producers have been told wheat prices could surge by 50% due to the Ukraine crisis. In addition, there could be further global supply chain disruption due to a shortage of key commodities. This could all add further inflationary pressures presenting a real challenge for central banks particularly the European Central Bank.

In the UK, flash PMI business activity indicator readings hit an eight-month high of 60.2 in February with the service sector boosted by the fading of the Omicron impact. Manufacturing activity was steady at 57.3 but input costs were the second highest on record. Meanwhile, January’s data on the public finances showed that the government ran a surplus of £2.9bn due to the strength of PAYE income tax payments. It appears as if government borrowing is going to undershoot in 2021/22 suggesting it may have sufficient resources to either cut taxes before the next election, to provide help for households with energy bills or even a combination of both.

China is planning bigger tax cuts in 2022 and intends to step up payments to some local governments to support slowing economic growth according to comments from Finance Minister Liu Kun.

Brent oil moved above $103 on the Russian invasion of Ukraine. OPEC+ is increasing output but the market is still tight with limited spare capacity with sanctions likely to impact Russian supplies.

Finally, we are all having to be more patient when buying goods given global supply chain disruption. Spare a thought therefore for a number of potential new Porsche and VW owners in America. Earlier in the month, the cargo ship Felicity Ace carrying almost 4,000 cars caught fire in the Atlantic Ocean on its way to the US. One owner tweeted ‘I just got a call from my dealer. My car is now adrift, possibly on fire, in the middle of the ocean.’  0 to 60 fathoms in under 3 seconds?