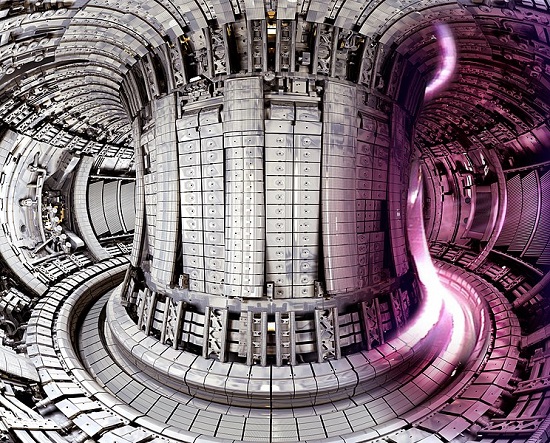 At the time of growing energy concerns, it is welcome news that scientists at JET (Joint European Torus) based in Oxfordshire, have recently made a major breakthrough in their quest to develop practical nuclear fusion – the energy process that powers the stars.

Nuclear fusion works on the principle that energy can be released by forcing together atomic nuclei rather than by splitting them. The science is quite mind-boggling as temperatures to produce fusion need to be above 100million Celsius! No materials exist on Earth that can withstand such heat, but the scientists have designed a solution in which super-heated gas, or plasma, can be held inside a doughnut-shaped magnetic field.

If nuclear fusion could successfully be recreated on Earth, it has the potential of virtually unlimited supplies of low-carbon, low-radiation energy.

In recent experiments 59 megajoules (11 megawatts) of energy were produced over a period of 5 seconds. To put this in context, this is only enough energy to boil some 60 kettles of water. However, its significance is that it validates design choices that have been made for an even bigger fusion reactor being built in France and expected to begin plasma experiments in 2025. The ITER facility in Southern France is supported by a consortium of world governments including the UK, EU, US, Russia and China. ITER will use internally cooled super-conducting magnets compared to copper electro-magnets use in Oxfordshire and it is hoped that the volume could be much greater.

While an amazing scientific breakthrough sadly nuclear fusion is unlikely to be commercially viable in time to avert the World’s current climate crisis. The UK, for example will still need to deliver a combination of nuclear, renewables (wind/solar) and energy storage to achieve zero emission targets by 2035. Furthermore, despite the progress at JET, the UK’s involvement in the ITER project will require it to ‘associate’ with certain EU science programmes and this is currently being clouded by post -Brexit ‘con-fusion’.

At a time of heightened geopolitical tension, the prospect of a life changing science advance can and should be given a higher priority.

The Ukraine crisis continued to overshadow markets. Investors hope that Russia will step back from the brink although the ‘gamesmanship’ between Putin and NATO looks as if it could drag on for some time to come. The main risk is the imposition of sanctions in the event of an invasion. This could drive up the price of a number of key commodities, from oil and gas to wheat which would add to inflationary pressures -not what the world needs right now as it emerges from the Covid-19 pandemic.

President Putin appears to have the West where he wants them. Western diplomats are heading to Moscow to talk to him while oil and gas prices have climbed so filling the coffers at the Kremlin. Germany appears at his mercy and along with the EU is reliant on Russia for gas. Ukraine’s economy is no doubt being damaged by the uncertainty and withdraw of foreign workers and investors.  For Putin he no doubt feels like a superstar which is what Russian politics is all about and demonstrating to the old guard that Russia is not being pushed about by the West. Having said all this, he could be completely mad and invade Ukraine anyway!

In a carefully choreographed meeting with Vladimir Putin, Russian Foreign Minister Sergei Lavrov said ‘there is always a chance’ of reaching an agreement with the West over Ukraine. Russia subsequently announced that ‘some’ of the troops that had participated in exercises near the Ukraine border were returning to their garrisons. However, the US and NATO took this with a pinch of salt, saying military intelligence suggested otherwise. NATO also fears Russia may be trying to stage pretext for attack after reports of multiple shelling incidents from rebel territory. US President Joe Biden told reporters there is ‘every indication’ that Russia will launch an attack on Ukraine ‘in the next several days’ and we note the Winter Olympics have ended. In the latest twist in the saga, President Biden has agreed ‘in principle’ to hold a summit with Putin to discuss the crisis following a proposal by French President Emmanuel Macron.  However, a Kremlin spokesman said it was ‘premature to talk about any specific plans for organising any kind of summit.’

In the UK, the Ukraine crisis saw petrol prices reach a new high adding to the cost-of-living crisis for some households. The UK unemployment rate was unchanged at the end of the year but wages failed to keep up with inflation in the final quarter growing by 3.7%. January CPI inflation was slightly ahead of expectation at 5.5% -a thirty-year high. No signs of relief then for the Bank of England and the inflation data would appear to cement at least a 0.25% interest rate hike at its next meeting on 17th March. Interest rate futures are suggesting a 70% chance of a 0.5% rate hike.

In the US, it looks as if QT (Quantitative Tightening) as opposed to QE (Quantitative Easing), is now part of the Federal Reserve’s (Fed) plan. There appears to be a discussion underway amongst Fed members to sell securities outright in order to steepen the yield curve and get rid of mortgage-backed securities entirely. This compares with the last period of QT in 2017-2019, when the Fed just let maturing securities roll off passively. Esther George, Kansas City Fed President said ‘With a $9-trillion balance sheet pushing down on long-term rates, we’re going to have to face some considerations: How much downward pressure should be applied, what are the implications for the yield curve, for risk, in terms of how that balance sheet affects the economy?’ What does accelerating QT mean for markets? As Esther George said ‘It could be a bumpy time’. The Fed published the minutes of its January meeting which were modestly dovish, suggesting interest rate decisions would be taken on a meeting-by-meeting basis. US interest rate futures had been predicting a 95% chance of a 0.5% interest rate hike in March after recent inflation data, but this has dipped to 37% following the latest Fed minutes.

China’s surprise decision to approve Pfizer’s Covid-19 pill is a rare insight into how Beijing may be planning to move beyond its zero tolerance Covid-19 strategy that is leaving it increasingly isolated. Meanwhile, the People’s Bank of China, unlike other leading central banks, is continuing to pump liquidity into the financial system with a further $15.7bn injected.

Brent oil touched $96 before easing back to under $94 on news of a possible US-Russia summit on Ukraine.

Finally, we have highlighted the increasing level of ransomware attacks in previous Alpha Bites. Given the heightened tension between Russia and the West, the Home Secretary Priti Patel has warned that UK interests could be targeted by Russian hackers, while GCHQ has announced that firms and public services should take ‘pre-emptive measures’ to defend themselves. President Putin may only be 5 foot, 7 inches tall but he casts a long shadow!