Dark Fate – Rise of the Machines 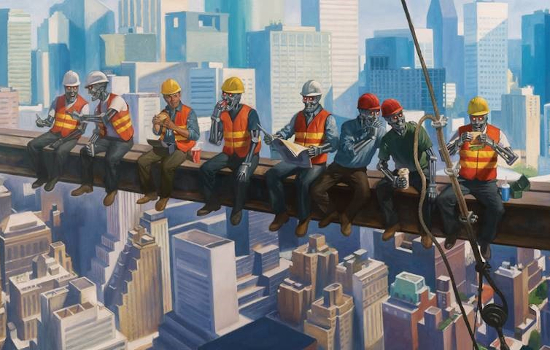 The latest film in the Terminator franchise, Dark Fate starring Arnold Schwarzenegger is currently in cinemas, so this week, we return to one of our past themes, the ‘Rise of the Machines’. The Terminator film franchise spans 35 years and like Arnold, might be getting a bit old in the tooth but reality does appear to be actually catching up with robots and cyborgs.

ORCA -the Offshore Robotics for Certification of Assets hub is seeking to address the offshore energy industry’s vision for a completely autonomous offshore energy field through the use of fully autonomous drone robots. The ORCA hub believes it is the largest academic centre of its kind in the world and is led from the Heriot-Watt and Edinburgh universities and includes Imperial College London and Oxford university as well as over thirty industry partners.

Aerial drones are already used offshore to inspect wind farms and oil production facilities. However, the ORCA drone robot goes one further. It can manoeuvre and attach itself to vertical surfaces and has a robotic arm so it could therefore deploy a sensor. The goal however is to incorporate artificial intelligence so that the robot drone can learn on the job and undertake inspections and repairs itself.

In France, scientists have recently enabled a tetraplegic man to walk again using a pioneering four-limb robotic system, or exoskeleton. The ground breaking technology used a system of sensors implanted near the brain to send signals to the robotic system, moving the patient’s legs and arms.

After last week’s vote in Westminster, is Boris Johnson’s Brexit plan facing a dark fate? The EU have granted the UK a ‘flextension’, but can MPs agree to a general election to break the parliamentary deadlock? Will independent MPs and those that voted against their party whip be terminated? One way or another, judgement day is approaching.

President Trump talked up the chances of a ‘phase one’ trade deal with China in November. White House economic advisor Larry Kudlow suggested that tariffs scheduled for December could be withdrawn if talks go well. Meanwhile, China’s vice-premier Li also highlighted substantial progress in trade talks. Over the weekend there were reports that the US and China are close to completing some sections of the initial trade deal.

However, while markets are more hopeful regarding a ‘phase one’ trade deal, impeachment proceedings against President Trump cast a shadow over proceedings. With the US Presidential election in November 2020, will Trump settle for a ‘quick win’ with US voters by getting China to make additional purchases of American agricultural produce rather than addressing the longer-term security threats posed by Chinese policy? There are also other global trade issues for investors to consider that need resolving such as aircraft and car tariffs.

Brexit? Maybe yes, but not just yet. The combination of the Brexit deal being passed, but the 31st October deadline voted down was pretty much as expected. The EU has granted the UK a third Brexit extension to 31st January 2020 having reached the conclusion that Westminster cannot pass the negotiated deal before 31st October. Having ‘paused’ his Brexit plan, the PM is set to pass a motion this evening to call for a general election on 12th December but will need two-thirds of MPs to agree. Having tried and failed to achieve this twice before it does not look like a case of third time lucky either. An alternative is the Lib Dem/SNP inspired motion for a general election on 9th December if the Government shelves Brexit plans. This would only require a simple majority not requiring the bulk of Labour MPs to back it. While Number 10 has dismissed this ‘gimmick’ there are reports that this is being taken seriously by the government. Sterling slipped back to $1.285.

In Europe, Germany’s Bundesbank said that economic output could have shrunk again slightly in the third quarter of 2019. Early indicators provide few signs of a sustainable recovery in exports and raise the risk that the slowdown extends to more domestically orientated sectors. In his last statement as President of the European Central bank (ECB), Mario Draghi confirmed the widely expected QE stimulus measures with the ECB’s bond buying programme to start at €20bn a month in November. He also called upon those European governments with financial headroom to undertake fiscal stimulus. Mario Draghi’s successor is Christine Lagarde, formally Chair of the IMF.

In China, there were reports that Beijing is drawing up a plan to replace Hong Kong’s leader Carrie Lam. Hong Kong’s legislature has formally withdrawn the controversial extradition bill that sparked months of unrest.

Brent oil edged up to $61 on reports that OPEC may consider greater oil production cuts at its next meeting in December.

Finally, Scottish Power has said that if the UK is to have net zero carbon emissions by 2050 that we will need 25million charging points – equivalent to installing 4,000 a day and 23million electric heat pumps to replace domestic gas boilers. The estimated cost would be £300bn! Given current government spending plans for hospitals, schools and policing is this really achievable?