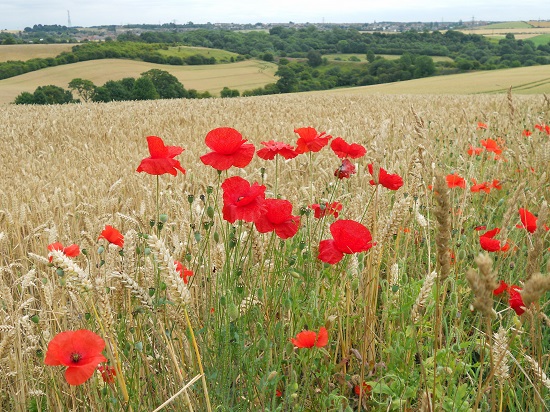 The imposition of sanctions on Russia has highlighted how important a supplier of key natural resources it is. Oil and gas prices have spiked. However, besides an energy crisis, could the world also be facing a food crisis?

Russian and Ukraine are leading exporters of wheat and prices have jumped by about 35% so far this year. However, Russia is also a major producer of nutrients like potash and phosphate – key ingredients of fertiliser. Norwegian based Yara International, one of the world’s biggest fertiliser companies has warned that half the world’s population gets food as a result of fertilisers and if it is removed from the field for some crops, then the crop yield could drop by 50%.

In the UK, the government has been quick to jump on the green bandwagon and is offering farmers incentives to convert farmland to wildlife havens. If farmers replace land used for crop production with trees it suggests food output will drop suggesting higher prices and the need to import even more food.

As an island nation, Britain faced food rationing in World War II during the Battle of the Atlantic which, led to the ‘Dig for Victory’ campaign with allotments springing up in parks and all available green spaces to grow food. The National Farmers’ Union has said ‘the government must act now, with a clear signal that food security is a priority for the nation’. Besides re-evaluating the UK’s energy policy, will Boris have to undertake another environmental U-turn and get farmers to ‘Dig for victory’?

Russia appears to be adopting similar tactics to those it has used in Syria, with the bombardment of civilian populations with no regard for life whatsoever. In addition, Moscow has said it has discovered biological weapons in Ukraine which the US dismissed as ‘absurd propaganda’ but is it a pre-text for Russia to use chemical weapons as it did in Syria?

Meanwhile, the US and NATO will not support a no-fly zone over Ukraine as this would likely lead to direct war with Russia. Instead of providing Mig fighters it looks as if NATO will supply Ukraine with more ‘defensive’ weapons such as hand-held anti-tank and anti-aircraft missiles. This led Moscow to undertake a missile attack on Ukraine’s main military training facility which is close to the border with Poland. This is seen as a warning to NATO over weapons supply to Ukraine. Meanwhile, Russia is seeking to use 16,000 Syrian fighters. In the latest ominous twist, besides running out of manpower, Russia is reported to be running low on missiles and the US believes it has approached China for more weaponry.

The Ukraine crisis remains a very fast-moving situation. It is increasingly looking an un-winnable war given staunch Ukrainian resistance. The invasion has totally failed to effect regime change and there appears dim prospects of the Russian military achieving anything other than even more destruction over the coming months. Is there a face-saving exit route for Putin? China seems the logical means to secure a ceasefire as President Xi Jinping has called for ‘maximum restraint’ to stop the situation from spinning out of control but Russia has approached China for extra weaponry! Might Putin accept concessions on NATO/EU membership and removal of the toughest sanctions in return of a withdrawal of his forces? Russia had signalled a solution is possible if Ukraine concedes the three rebel states, is blocked from both NATO and EU membership and it also demilitarises! Difficult seeing Ukraine agreeing to the latter. However, peace talks are ongoing with a third round of meetings today and over the weekend President Volodymyr Zelensky said that there were ‘some positive shifts from Russian negotiators compared to earlier ultimatums.’

The economic fall-out from the Ukraine crisis has been reflected in surging energy prices. Asian Liquified Natural Gas (LNG) prices hit an all-time high – equivalent to over four times the cost of a barrel of oil! A number of western countries are to stop buying Russian oil. The UK will phase out the use of Russian oil by the end of 2022. Russian oil accounts for 8% of UK oil imports but a significantly higher proportion of diesel.  Meanwhile, Russia’s isolation on the global stage has continued with western companies pulling out of the country in droves. The chief economist of the World Bank said that Russia is in ‘square default country’. Indeed, Russia has threatened to repay foreign currency debt in Roubles – the first default since 1998. This in turn will create pain for the global banking system. Besides $75bn of Russian bonds, as much as $90bn of bank loans are tied up in Russia with German, Austrian and Italian banks in particular the most exposed.  As with the last financial crisis, as a result of syndication and securitisation, no one can be absolutely sure where the risk lies.

Besides higher energy costs, more companies are beginning to highlight the risk to global supply chains.  For example, the European car industry is particularly vulnerable – the Mini plant in Oxford is due to halt production until 18th March due to a shortage of components from Ukraine. Restrictions on Russian and European air space is also hitting air freight capacity. Meanwhile, as governments are concentrating on sanctions there is growing reality that many have been naïve in trusting Putin and will have to develop long-term strategies to reduce dependence upon Russian natural resources -oil, gas, wheat, nickel, palladium. Governments are also going to have to step up defence spending significantly and don’t forget this has to be paid for when many are still counting the cost of the dealing with the Covid-19 crisis.

The European Central Bank chose to focus on the inflationary consequences of the Ukraine invasion and delivered a ‘more hawkish’ message than had been expected and lifted its inflation forecast to 5.1%.

In the US, CPI inflation hit 7.9% in February, slightly lifting the forward path of interest rate hikes by the Federal Reserve (Fed). Markets are now expecting a 0.25% interest rate increase at the next Fed meeting. A big slump in US consumer confidence – to an 11- year low -also weighed on investor sentiment.

China is facing its worst outbreak of Covid-19 in over two years and its zero -tolerance policy has led to more lockdowns. This includes Shenzen with a population of 18m. This could create further disruption for global supply chains.

Brent oil jumped to $130 as the US, EU and UK announced their intentions to stop buying Russian oil. However, the price then dropped sharply to $110 on news of possible peace talks and as the UAE called upon OPEC to increase output. However, while OPEC could increase output, it is difficult to see how it can make up for the shortfall in Russian oil in the very short-term, a situation not helped by President Joe Biden’s poor relations with Saudi Arabia. Russia is also blocking the Iran nuclear talks -another possible source of oil.

Finally, talking of Dig for Victory. During the Covid-19 lockdown allotments became even more popular as those without a garden sought to grow their own produce. Unsurprisingly, the worst waiting times to be allocated an allotment are currently in London with the borough of Camden reporting a wait of over 17 years!