Russian for the Exit 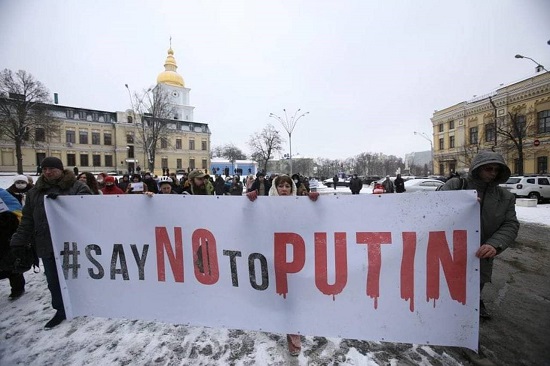 The Ukraine crisis is a reminder that the world is a dangerous place!

Even Germany is now going to materially increase defence spending and intends to send weapons to Ukraine. This is arguably one of the biggest shifts ever seen in Germany’s post-war foreign policy. Meanwhile, Germany’s Green Party has suspended its opposition to nuclear power given the country’s reliance on Russian gas!

The world has been worrying about the end of mankind due to global warming, when we are now waking up to the reality that our immediate presence is threatened by one man and a red button in control of nuclear weapons. Indeed, one whose military forces are even prepared to shell a nuclear power plant!

The UK is shifting defence spending towards cyber-warfare, but the Ukraine invasion is also a reminder that defence also relies upon soldiers and armoured fighting vehicles in large numbers on the ground. Defence contractors could be entering a golden age of investment.

Meanwhile, Russian investments have plummeted on sanctions while global markets have also been rattled. More businesses are withdrawing from Russia and rapidly distancing themselves from Putin.

Just as the world was emerging from one crisis with Covid-19, we have entered a new one courtesy of President Putin. Everyone has been caught in the ‘fall-out’ from Russia’s invasion of Ukraine. Sanctions are starting to have an impact but in the short-term there will be pain all round from higher gas and petrol to higher food costs. It is a cost we must all be prepared to accept to stop one man from taking over Europe.

Russia’s invasion of Ukraine, the worst humanitarian crisis in Europe since World War II, Brent oil above $129 and a real challenge for central bankers as inflationary pressures continue to build.

A sell-off in risk assets continued last week with investor nerves rattled by the Russian shelling of a Ukrainian nuclear reactor facility. The West is planning more sanctions while more western companies are pulling out of Russia. Russia’s economic isolation is increasing by the day. For example, the world’s largest shipping firm Maersk has said it will halt container shipping to and from Russia. Credit rating agency Fitch has cut Russian debt to ‘junk’ status while some are forecasting the Russian economy could shrink by up to 7% – a worse plunge than caused by Covid-19.

Having dug himself into a hole it is hard to see how Putin can get out and save face. Despite the pain of sanctions on the Russian people it looks as if he will push on regardless with the ground invasion of Ukraine. Prolonged and bitter fighting and an even bigger humanitarian crisis seem likely. Sanctions will take time to work but could they eventually force Russia’s oligarchs to apply pressure on Putin to call a halt? Could China step in to help stop the fighting? China does not want war in one of its major export markets and a slowdown in global economic growth. Putin’s plan for a swift invasion like in Crimea has unravelled – but he is ruthless, cornered and more dangerous than ever.

Russia’s invasion of Ukraine and western sanctions will add to global supply chain disruption and will create a challenge for central banks. More countries are seeking to stop buying Russian oil but the west needs to keep the lights on. Gas and oil prices have spiked (see below.) Inflation remains stubbornly high and rising oil, gas and wheat prices will add fuel to the fire. Economic growth will inevitably slow. All eyes on the US Federal Reserve which, along with the Bank of England and European Central Bank, will need to tread a very careful path.

In the UK, the implications of the Ukraine crisis – the cost-of-living crisis getting even worse – was highlighted by rising petrol and gas prices. Analysts are suggesting the typical household energy bill could rise to £3,000 a year, when the next energy cap takes effect in October. Consumer confidence will take a knock but, in the meantime, this does not appear to have come through in the house market where Nationwide revealed the largest monthly increase on record in annual house prices. Nationwide, not surprisingly are expecting a slowdown in the coming months.

In Europe, inflation climbed to an all-time high of 5.8% in February due to the energy price surge. Core inflation at 2.9% was also higher than expected.

In the US, Jerome Powell, Chair of the Federal Reserve (Fed) acknowledged that the Ukraine crisis has added a further complication to an already uncertain outlook, while re-iterating his view that a 0.25% interest rate hike will likely be appropriate at the next Fed meeting in March. However, US futures have already shifted from pricing in up to 7 interest rate hikes by the Fed in 2022 to between 3 and 4.

China’s February PMI business activity indicator suggested the manufacturing sector has returned to modest growth with a reading of 50.2. More significantly, Beijing is reported to be considering an exit from its draconian zero tolerance Covid-19 policy which would be positive for its economy. Over the weekend, China lowered its economic growth forecast to about 5.5% but announced its intention to increase defence spending by 7.1%.

Brent oil jumped to a 13- year high of $129, making a 65% jump so far in 2022. This is due to a combination of potential direct sanctions on Russian oil exports and lack of resolution on the Iran nuclear deal. Oil supply/demand was already tight with dwindling spare OPEC+ spare capacity and limited growth in US shale oil. Russia is the world’s third largest oil producer and losing a big chunk of its exports of 5million barrels a day would be challenging. Given the potential for sanctions to be extended we anticipate a prolonged period of high petrol prices.

Finally, the staycation cost of living crisis -expect to pay a lot more for fish and chips! Soaring energy bills, higher packaging costs and wholesale fish prices through the roof. Haddock is up by over 80% and cod by 85% in the last 12 months. The Ukraine crisis will add further pressure with 40% of the UK’s white fish from Russia which is also a major supplier of rapeseed and sunflower oil. The National Association of Fish Friers says a typical portion of fish and chips costs between £6.50-£9 depending on region but some members could soon be forced to raise this to over £10. Who said inflation was transitory?