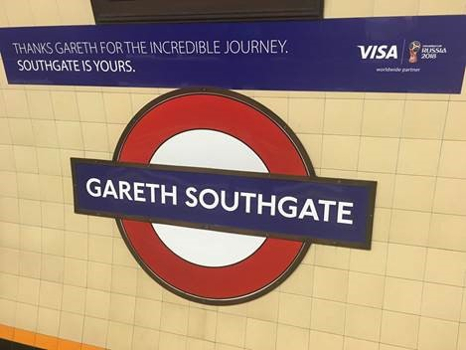 The Piccadilly line tube station in Enfield, North London, will be temporarily rebranded Gareth Southgate for 48 hours from Monday, Transport for London has today revealed.

Now onto other notable disruptions this morning…

Some traditional business models, that have existed for many years, are now under threat from a new age of internet- based disruptors. Even global ‘blue chips’ are not immune from the competitive headwinds created by these disruptors, many of which are relatively recent start-up ventures.

For example, we read an interesting article about the founder of ice cream brand Halo Top. This brand launched in 2012 but just six years after starting is now the best-selling brand in the US. In 2016, it was reported to have sold 28.8million tubs of ice cream, overtaking Ben & Jerry’s which, is owned by Unilever and Haagen-Dazs, which is owned by Nestle.

What is really interesting about Halo Top is the use of social media to promote itself. This has included hiring US college students to send Halo Top coupons to people with large followings on You Tube and Instagram who were posting about health and fitness.

Historically, fast-moving consumer goods companies like Unilever, Nestle and Proctor & Gamble have been viewed as ‘defensive’ business models. However, the new ‘kids on the block’ are challenging that perception. Perhaps, using the rationale ‘if you can’t beat them, join them’, Unilever acquired start-up, Dollar Shave Club in 2016 for $1bn making it the number two player in the traditional razor market after Gillette. This has enabled it to challenge brand leader Proctor & Gamble’s position in the US male grooming market and rollout globally.

Last month, Amazon extended its disruptive reach following the acquisition of US online pharmacy PillPack. The fear that Amazon now creates upon entering a new market is reflected in the fact that the $1bn acquisition wiped $15bn off the market value of traditional US pharmacies such as CVS Health, Walgreens, Boots, Alliance and Rite Aid.

Which got us thinking: These days, investing feels a bit like commuting to work by rail. Watch out for possible disruption.

President Trump’s visit to Europe during which he described the ‘EU as one of the United States biggest foes due to what they do to us in trade’. Russia is a foe in certain respects. China is a foe economically’.

Further potential tariffs were announced against China. Markets had a calmer week despite this with focus turning to the US second quarter earnings season. This week we have the first Trump-Putin summit in Helsinki and in the UK, the Parliamentary debate over the PM’s latest Brexit proposal.

Arriving at a NATO summit in Brussels he accused Germany of being ‘totally controlled’ by Moscow because it buys a large amount of gas from Russia, due to the closure of its coal and nuclear power plants. He has accused European countries of not contributing enough to the NATO budget tweeting ‘All NATO nations must meet their 2% spending commitment and that must ultimately go to 4%’.

Global markets were unnerved as the trade tariff spat between the USA and China ratcheted up another notch. The US released a list of a further $200bn of Chinese goods, including a wider range of consumer products on which it will impose 10% tariffs from early September. Hopes for talks between the US and China appear to have broken down. China has said it will retaliate but markets are watching closely to see just what it will do.

The fallout from last weekend’s Chequers Brexit meeting continued. Following the resignation of Brexit Secretary David Davis, Boris Johnson resigned as UK Foreign Secretary. With the departure of Brexit hardliners, PM Theresa May might be in a slightly better position to deliver a softer Brexit unless there is a leadership challenge. However, what was an embarrassing and difficult situation for the PM has turned into a potentially full-blown political crisis. Sterling slipped back under $1.32 despite some more encouraging economic data. The possibility that negotiations between the UK and EU do not conclude in time for March 2019 departure is rising, although the Article 50 process could be extended.

In the UK, the Bank of England will have been somewhat re-assured by UK economic growth data for May which was in line with expectation at +0.3%. Encouragingly, the important service sector looks to have continued its recovery after the adverse weather impact of the first quarter. BRC retail sales data showed June was a relatively better month for consumers with hot weather and the World Cup having driven food and drink, TV and outdoor goods. The implied probability of a 0.25% interest rate in August by the Bank of England remains above 60%. Meanwhile, the Royal Institute of Chartered Surveyors confirmed houses are taking longer to sell than a year ago, typically 18 weeks compared to 16 weeks.

In Europe, the President of the European Central Bank, Mario Draghi was in a relatively upbeat mood saying, ‘we’re confident that basically thanks to our monetary policy the inflation rate will converge to our objectives’.  The European Commission cut its economic growth for the eurozone for 2018 from 2.3% to 2.1% but left its 2019 forecast unchanged at 2%.

China’s Q2 economic growth was in line with expectations at 6.7%. However, June activity indicators looked mixed with retail sales and fixed asset investment in line but industrial production was weaker than expected. Markets will continue to monitor this latter indicator closely given the current trade tariff developments.

Brent oil retreated sharply to below $74 on the US/China tariff developments and news that Libya had re-opened a number of oil terminals.

Finally, some wag in the City reckons Britain could be turning into a ‘banana republic’. Why? Well, it is incredibly hot, it has a football team that has done well in the World Cup and lastly, has a government in turmoil.