Don’t Stand So Close To Me 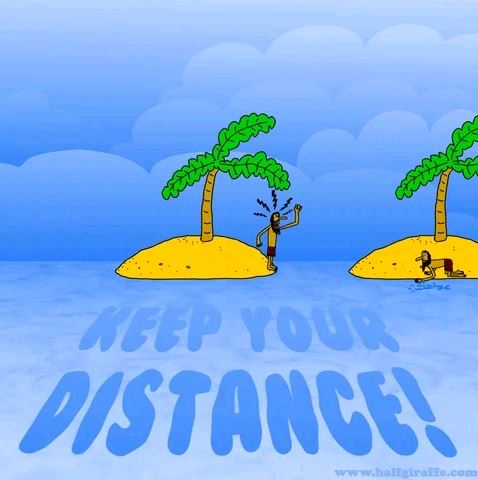 Drivers have got used to distancing chevron markers on some motorways to prevent vehicles getting too close in peak periods. This doesn’t seem to be open to debate and is simple common sense. Now we all have to get used to walking around shops, factories, warehouses and offices with 2-metre social distancing markers.

However, now that we have become accustomed to social distancing, senior Conservative MPs are urging PM Boris Johnson to consider reducing the 2-metre social distancing rule, due to concern about the hospitality sector.

To add to the global muddle of confused messages, the US advises keeping 6 feet apart, France and Italy recommend people should keep 1-metre apart and Germany 1.5-metres. The World Health Organisation (WHO) recommends a distance of 1-metre. Spain like the UK has a 2-metre rule. Professor Chris Whitty has re-iterated that it is ‘really important’ that people stay 2-metres away from each other. A recent study, partly funded by the WHO, suggests keeping just a metre apart reduces the risk of infection by 80%.

For many businesses 1-metre or 2-metres could be the difference between survival and going under. However, consumer confidence will also be crucial as some customers may not feel comfortable visiting a shop or restaurant with 1-metre distancing if they have been led to believe that 2-metres is the minimum required to stop the spread of Covid-19. Floor marking tape, plastic screens and face masks look as if they are going to be with us for a very long time. Sadly, some very small businesses may not be if social distancing restricts customer footfall.

President Donald Trump vowed to order a military crack down on once-in-a-generation violent protests gripping the US. Hong Kong’s leader accused the US of applying ‘double standards’ in response to the violent protests! Markets have not been unnerved by the protests in the US which are more likely to be reflected in the US Presidential election. Instead, markets have focused on the further loosening from lockdown and the gradual opening of major economies underpinned by government and central bank policy support. Additional European Central bank and German government stimulus was supportive. US jobs data also gave markets a boost. The US index of technology shares – NASDAQ hit an all-time high.

However, Covid-19 remains with us, with parts of Latin America such as Brazil and Mexico recording record death tolls. The risk of a second wave of infections remains as lockdown eases and for example, authorities in Berlin believe the R rate of infection has jumped to 1.95.

While President Trump did start the process to remove Hong Kong’s special trade status at his recent press conference markets were relieved that he did not announce more. However, China is said to have paused some imports of US farm products which were meant to be increasing under the trade deal. Meanwhile, China is to allow foreign airlines, including US airlines that are currently blocked from operating in the country due to Covid-19 to resume limited flights. This comes after America ordered the suspension of all flights by Chinese airlines into and out of the US from the 16th June in retaliation. This can only add to the growing friction between the world’s two largest economies.  Meanwhile, President Trump threatened tariffs on Chinese and European car imports because of duties imposed on US lobster exports!

Global trade tensions continue to simmer beneath the surface as President Trump has announced an investigation into foreign digital services taxes which he believes singles out US tech giants like, Google, Apple, Facebook and Amazon. Meanwhile, France and the US are still negotiating after France introduced a digital services tax and the US countered tariffs on French food and drink.

Remember Brexit? Yes, the event that dominated media headlines and divided households before Covid-19. Despite the war of words, Sterling picked up to almost $1.27 as rumours circulated of a possible Brexit compromise. However, Chief EU negotiator noted ‘no significant progress in Brexit talks.’

In the UK, house prices fell by 1.7% in May from the previous month, the largest monthly fall in 11 years, according to the Nationwide. Meanwhile, the number of workers on furlough at the end of May increased to 8.7m with £175.bn claimed so far. That’s another 300,000 added over the past week. Wasn’t the government expecting some workers to be going back to work in certain sectors? The Bank of England revealed that £7.4bn of consumer credit was repaid in the first full month of lockdown, including £5bn of credit card debt. This reflects the record fall in retail spending in April. Some credit repayments will have been covered by furlough payments and the government must be hoping consumers resume spending as lockdown lifts. However, given how quickly circumstances changed for many workers have spending habits changed forever? Furthermore, will us Brits still be prepared to wait in long queues outside shops once the weather turns?

In Europe, another stimulus plan emerged from the EU executive, launched with the usual fanfare and subject to the usual caveats that some countries may continue to dissent. This package totals €750bn, in addition to the long-term budget expenditure of €1.1trillion. About two-thirds of the funds raised from the markets would be allocated via grants, primarily to the most affected areas in the southern EU. Meanwhile, in Germany, Lufthansa is to get a €9bn bail out with the government taking a 20% stake in the airline while the French government is putting aside €8bn to support their car industry. Christine Lagarde, President of the European Central Bank (ECB) said that the EU looks to be trending towards the ECB’s worse-case scenario in terms of the recession.

In Europe, Germany’s governing parties agreed to a €130bn stimulus package to help the country’s economy recover from the Covid-19 outbreak. The European Central Bank also announced that it was increasing its QE bond buying programme by €600bn to €1.35trillion and will run until mid-2021, six months longer than planned.

In the US, the number of jobless was expected to increase by a further 7million but fell by 2.5million as people were re-employed as more US states re-opened from lockdown.

In China, the Caixin services sector PMI activity indicator for May bounced back into expansion territory although employment and export order remained weak. However, China’s exports and imports fell in May with the latter falling by 17% to a four-year low.

Brent oil continued to rally, moving above $43 as more countries eased lockdown measures and OPEC+ agreed to extend output cuts through to July.

Finally, given China was ‘first in and first out’ of the Covid-19 outbreak an example of how the rest of the world might see a return to normality. Marriott has reopened all of its 350 hotels in China and encouragingly says it has seen a recovery in business travel although the occupancy rate is currently 40%.