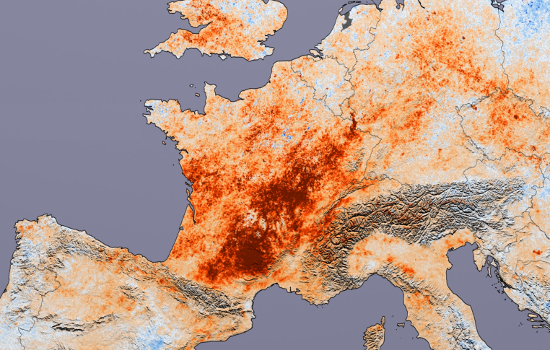 Temperatures across Europe have hit record levels, presenting a major health threat. We are reminded that that water is becoming increasingly scarce and in many areas is putting agricultural productivity under risk.  Scientists are developing a satellite system to survey fields of crops to estimate water-use by plants and to also show how they transfer that water back into the atmosphere. The new system is being considered for inclusion in the EU’s Earth observation programme, Copernicus# and would calculate how much water different crops required in different areas and how often they would need to be irrigated.

Scientists at King’s College, London are undertaking research as part of the development of a satellite concept called the Land Surface Temperature Monitoring (LSTM) mission. The work is part of a co-ordinated effort between NASA and the European Space Agency. The hope is that LSTM could become operational within the next 10-years.

The UK has some of the best Earth observation scientists and engineers in the world. However, despite this there is a question mark overhanging Britain’s continued involvement in Copernicus and that is Brexit. Copernicus is EU-funded and while the UK government has said it wishes to remain involved with the project, this will need to be renegotiated following Brexit.

Whilst the country debates Brexit, there are many workers in industry and scientists who are keen to ensure that that the UK remains involved with EU funded projects, such as Copernicus.

# Nicolaus Copernicus was a Polish Renaissance-era mathematician and astronomer, who put forth the theory that the Sun is at rest near the center of the Universe, and that the Earth, spinning on its axis once daily, revolves annually around the Sun. This is called the heliocentric, or Sun-centered, system.

The combination of rising tension in the Gulf of Oman and prospect of a US interest rate cut helped propel gold to a six-year high. America introduced additional sanctions against Iran targeting the political leaders while Iran said there was no more chance of a diplomatic solution to the current situation.

Global markets remain in a ‘bad news is good news’ mode with investors viewing weak economic data as a trigger for central bankers to cut interest rates although this theme may be losing some momentum with three US interest rate cuts in 2019 being priced in already by the futures market. The governor of the St Louis Federal Reserve (Fed), James Bullard, said it may be time for an interest rate cut in the US but a 0.5% cut seems unwarranted. With that statement, he took the wind out of the sails of the current speculation that the Fed may start monetary easing with a surprise rate cut of that magnitude.

The most important factor for central bankers and investors remains the US and China trade tariff dispute. Following talks at the G20 with China’s President Xi Jinping, President Trump has agreed to restart trade talks, has said he will not be adding new tariffs on $330bn of Chinese imports and, in what appears to be an important concession, has said US companies would be allowed to continue to sell to Huawei. Whilst important differences remain to be resolved, markets have reacted positively to the resumption of talks.

President Trump also found time to cross the border into North Korea, accompanied by its leader Kim Jong-un. This is the first time a sitting US president has set foot in the country and the two leaders agreed that negotiators would meet in the next few weeks to resume discussions about North Koreas nuclear programme.

The G20 also saw a serious and unsmiling Theresa May shake hands with Russia’s President Putin. With the two suspects for the Skripal poisoning still at large in Russia, May told Putin that they must be “brought to justice” and that Russia should stop its “irresponsible and destabilising activity”.  Russia continues to deny any involvement in the poisoning, but Putin’s comments that “liberalism” that has underpinned Western democracies had “outlived its purpose” will do nothing to lessen concerns over Russian attitudes to the West.

Turning to Brexit, Boris Johnson threw down a challenge to rival Jeremy Hunt with a ‘do or die’ hard line pledge to leave the EU on 31st October. However, there were media reports suggesting that up to 20 Conservative MPs are prepared to block a no-deal Brexit. Sterling edged back below $1.27. Bank of England governor Mark Carney, speaking to the Treasury Select Committee, said ‘that Brexit uncertainty is weighing on business confidence is absolutely clear. We pick it up in the data, we pick it up in the surveys – it’s very clear’.

In the UK, the soggy start to the summer has hit BBQ loving Brits and made life tougher particularly for food retailers. Last year Britain was enjoying sweltering temperatures and the men’s World Cup was underway. Not surprising, ice cream sales were £15m lower last month, beer down sales were down by £17m and burger sales down by £6m. Sales volumes across 88 of the largest retailers are estimated to have fallen at their fastest pace since early 2009 in the year to June.

In Europe, German business confidence declined to the lowest level since 2014 which, probably shouldn’t come as a surprise being a manufacturing driven economy and given Brexit and US/China trade tariff uncertainty.

In the US, economic data largely disappointed with June consumer confidence the weakest in nearly two years while new home sales and the Case-Shiller home price index were also softer than expected. US durable goods orders were also below expectation although were impacted by the Boeing 737 Max suspension.

Brent oil edged up above $65 as relations between the US and Iran continues to be strained.

Finally, four World War I German battleships sunk in Scapa Flow in Orkney in 1919 are being sold on eBay with an asking price of £800,000. According to the seller they were acquired from a defunct salvage company. This brings a whole new meaning to ‘having an investment that is currently underwater’.