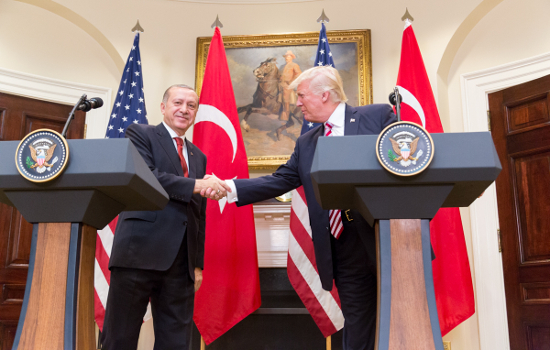 Tension is increasing between the US and Iran. US secretary of state, Mike Pompeo, has landed in Saudi Arabia in a hastily arranged visit. The recent downing of a $100m US surveillance drone, reportedly brought us within 15 minutes of a military strike, before Trump intervention.

However, the US and Turkey, one of Washington’s long term and strategic NATO allies, appear to be on a collision course as well. This is because Turkey intends to buy the advanced Russian S-400 anti-aircraft missile air defence system. This is especially worrying for the Americans because Turkey is also planning to deploy 100 US-built F-35 fighters. With Turkish President Erdogan leaning towards Russia, the US fears that a Russian presence and involvement in Turkey’s air defences, operating alongside the F-35, could enable Moscow to glean highly sensitive intelligence. Furthermore, Turkey manufactures parts for the F-35 and the US is now taking steps to remove the country from the project.

Given Turkey’s key geographical location on NATO’s southern flank, Turkey is a country that the West cannot turn its back on.

In an interesting twist, President Erdogan suffered a humiliating defeat in the re-run of the Istanbul election that he had ordered. Is the Erdogan grip on Turkish politics weakening, how will the US react?

Markets were focused on the US Federal Reserve and interest rate policy while keeping an eye on developments in the Middle East between the US and its allies and Iran. Comments from the head of the European Central Bank were supportive for markets, while President Trump confirmed a meeting with China’s premier to discuss trade.

American Commerce Secretary Wilbur Ross had downplayed expectations for any breakthrough on trade talks between the US and China at the G20 meeting at the end of this month. China said it is prepared for a protracted trade war and there a number of media articles discussing how tariffs will hit US consumers as China is so entrenched in global supply chains. However, President Trump tweeted that he had a very good telephone conversation with President Xi Jinping of China and that the two leaders will have an extended meeting at the G20 summit in Japan. Markets remain hopeful of a trade deal given the mutual damage to both economies but are starting to realise that this may take some time. Meanwhile, Chinese telecoms giant Huawei announced it will cut production by $30bn in the coming two years as the US restriction on component supply begins to bite, and four more Chinese tech companies and a research institute were added to the trade blacklist.

The week was also dominated by central bank activity. The Federal Reserve adopted a more dovish stance and is now expected to cut interest rates in July, with further cuts anticipated. Meanwhile, in Europe, Mario Draghi indicated the ECB might also trim rates and resume its bond-buying, should inflation remain below its 2% target. As a result, the universe of negative-yielding bonds has jumped to a new record of $12.5tn, higher than the previous peak in 2016.

In the UK, the British Chamber of Commerce (BCC) warned that business investment could fall by 1.3% this year and might increase by only 0.4% in 2020. The BCC believes companies are tending to focus on contingency planning for Brexit rather than investing in new long-term growth projects.

The Conservative leadership contest rolled on with Boris Johnson and Jeremy Hunt being the final two. Reports of a domestic incident in which the police were called to a flat Boris Johnson was sharing with his girlfriend overshadowed the first hustings with Conservative members over the weekend. Members will make the choice in a postal ballot, with the result being declared next month. Uncertainty about Brexit saw Sterling slip towards $1.25.

In Europe, the head of the European Central Bank, Mario Draghi suggested that it could introduce more stimulus measures given economic activity indicators showed lingering softness. “We will use all the flexibility within our mandate and we will do so again to answer any challenges to price stability in the future”. President Trump immediately complained via twitter that this would weaken the Euro against the Dollar making it easier for the EU to compete against the USA. He added “They have been getting away with this for years, along with China and others”. It has been reported the US administration favours commitments which target a stable exchange rate as part of trade deals, therefore ruling out competitive devaluations and imposing penalties for any transgressions. Lower foreign exchange volatility, however, may bring a number of unintended consequences, including a potential impact on the real economy as currencies won’t be able to adjust in response to shifting fundamentals.

In the US, the Fed voted 9-1 to keep rates unchanged at 2.25-2.50%, but this was accompanied by a more dovish policy statement. Policymakers were split down the middle in their projections; eight expected at least one rate cut will be needed this year, while another eight saw no change in rates and one expected a rate hike. Fed Chair Jerome Powell signalled in his press conference that the Fed was prepared to cut rates as early as next month in the absence of a near-term de-escalation in tensions.

In China, house prices increased by 0.7% in May, the fastest growth for five months with smaller cities being the main driver. Chinese developers continue to face funding strains after a string of tightening policies since last year in an effort to reduce financial risk. As a result of these measures, some developers have been prompted to issue US dollar bonds overseas at double the cost of borrowing domestically. This raises two concerning factors: the extent to which developers assume property prices will continue rising, therefore being able to incur a higher cost of capital, and the challenging backdrop for global income investors who are required to assume higher levels of risk in order to achieve enough yield.

President Trump’s tweet about US/China trade talks at the G20 summit, combined with rising tension in the Middle East, after Iran shot down a US military drone, helped push Brent oil up to $65. These developments added further tension after the attacks on two tankers near the Strait of Hormuz. In addition, OPEC confirmed that its members will keep July production within cartel targets, despite the global supply pact expiring at the end of June.

Finally, Tottenham Hotspur have leapt to the top of the league, leapfrogging rivals Arsenal. Unfortunately, this is the business rates league table. Spur’s new stadium has a rateable value of £7.2m compared to Arsenal’s £6.1m. Spur’s will therefore have to pay an estimated £3.7m in business rates this year.