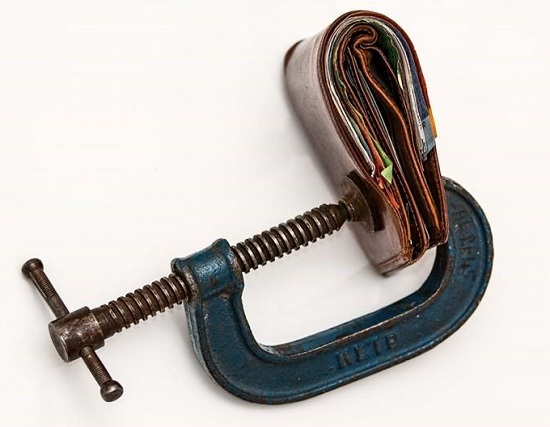 Just in case you hadn’t realised, there is a cost-of-living crisis.

Who remembers the rampant inflation of the 70’s and 80’s? Half of the UK’s population will not, as they are too young!

Inflation is at a thirty-year high and there is the largest squeeze on UK consumer disposable income since the 1950’s. Households are feeling the pinch – everything is becoming more expensive – whether it’s the heating bill, filling the car with petrol or doing the weekly grocery shop.

The release of pent-up demand and supply chain disruption due to Omicron, following years of central bank stimulus, was always likely to push inflation up. Now, Russia’s invasion of Ukraine has created a real challenge for central banks who are looking to keep a lid on inflation as energy prices and food are spiking even higher.

The Office for National Statistics (ONS) has recently updated its shopping basket of goods to calculate the cost of living in the UK. This year, the ONS has added 19 items, removed 15 and left 715 unchanged. High demand for workout gear and health-conscious vegetarian meals have seen these added to the shopping basket. Reflecting Covid-19 lifestyles, anti-bacterial wipes as well as craft and hobby kits for adults are also included. Even pet accessories have made it in to reflect the increase in pet ownership during the pandemic. Those goods dropped from the basket include men’s suits, reflecting the shift to working from home.

While the shopping basket has changed, the direction of inflation has not – upwards! The Bank of England was flagging a further inflationary spike due to higher energy bills and that was even before Russia invaded Ukraine. Inflation is expected to move above 8% in the coming months. Many lower income households are already struggling and the Resolution Foundation has warned that 1.3million people may not be able to afford basic necessities.

Central banks are starting to lift interest rates to tame inflation, but a lot of the pressure is coming from events outside of their control – commodities/supply chain disruption.

Given events in Ukraine, a pro-longed period of elevated energy prices and inflation looks more likely.

The perfect storm – the war in Ukraine, oil, inflation, rising government bond yields and the largest Covid-19 outbreak in China since Wuhan. Despite these headwinds, UK equities edged higher last week.  However, the yield on US 10-year Treasury hit a three -year high of almost 2.5% and one US investment bank is now forecasting four interest rate hikes of 0.5% a time by the US Federal Reserve with rates to hit 3.5% in 2023.

The BBC reported that both Russia and Ukraine were becoming more realistic in peace talks and that both sides were starting to drop some of the red lines. However, massive hurdles remain to achieve peace.  An adviser to President Zelensky said ‘Russia is using talks to trap the West into thinking further sanctions aren’t necessary. You don’t look for peace and bombard cities on a large scale at the same time.’ President Zelensky said he is ready to meet President Putin, while the latter suggested there is little to discuss at this point. Zelensky also said that any demands with regards to the territorial integrity of Ukraine by Russia would need to be put to a referendum.

Meanwhile, the war of attrition continues and the humanitarian crisis grows. The morale of Russia’s army is reported to be low – unofficial reports suggest over 10,000 Russian soldiers may have been killed. Without the numbers to take Ukrainian cities by storm, Russian forces are surrounding them and then starving people out and just flattening them progressively by bombardment. President Joe Biden warned Putin ‘has his back to the wall’ and there is a ‘clear sign’ Russia intends to use chemical weapons. As US/Russian relations fall to a post-Cold War low, US businesses have been told to increase security, with fears that the Kremlin could be planning more cyber-attacks. The same risk no doubt applies to the UK and Europe.

The economic cost of the war in Ukraine was reflected in steel prices which have hit a record high. Russia is the third largest exporter of steel globally, while Ukraine is the eighth largest. Soaring energy prices have also hit production, with 40% of Europe’s steel output produced in electric arc furnaces. Meanwhile, sanctions, stock-piling and Covid-19 lockdowns in China are leading to shipping congestion across the global maritime trade. Supply chain disruption and elevated shipping costs are likely to contribute to inflationary pressures. Elsewhere, higher fertiliser and feed costs are pushing up food prices and for example, the price of wholesale milk powder has just hit an 8-year high.  Meanwhile, a number of oil traders have warned that there could potentially be rationing of diesel as half of European imports come from Russia. By comparison, the UK relies on Russia for 18% of its diesel. However, the diesel market remains extremely tight.

UK inflation touched a 30-year high of 6.2% and is expected to climb above 8% in April. The spike in inflation can no longer be attributed solely to higher energy costs having broadened into a number of sub-sectors used to calculate the data including the key categories of food and clothing. Against the grim background of the war in Ukraine and the cost-of-living crisis, understandably Chancellor Rishi Sunak wanted the key take away from his Spring Statement to be an easy-to-understand tax cut. The deferral of the reduction in the basic rate to 19p until 2024, coincidentally the year of the next general election, would appear to make sense politically, but following the hike in national insurance is much less compelling. The overall tax burden at the end of the budget forecast period will remain at its highest since the 1940’s. There was less help than expected for low-income households and the well -flagged cut in fuel duty looks a drop in the ocean. UK retail sales were also weaker than expected in February and that is before the impact on households of higher utility bills.

In Europe, Christine Lagarde President of the European Central Bank (ECB) suggested, logically enough, that ECB policy is set to remain out of sync with the US Fed. The two regional economies are suffering different impacts from the war in Ukraine. However, the head of Germany’s Bundesbank delivered a ‘more hawkish’ message suggesting that ECB policy should not be diverted for too-long by geo-political uncertainty.

In the US, Jerome Powell, Chair of the Federal Reserve (Fed) said he was prepared to raise interest rates by more than 0.25% at a time if needed. He said the US jobs market is very strong and cautioned that inflation is much too high. Futures are now pricing in a 64% chance of a 0.5% interest rate hike at the Fed meeting in May.

The Yen hit a six-year low against the US Dollar given the growing divergence in monetary policies between Japan and the US. Japan is battling with pandemic related disruptions, slowing growth in China as well as higher energy costs.

China, has seen the largest Covid-19 outbreak since Wuhan. The authorities are continuing to enforce their dynamic zero tolerance Covid-19 policy and have begun locking down most of Shanghai which has a population of 26 million. Besides the impact on the Chinese economy these lockdown measures could further disrupt global supply chains.

Brent oil re-bounded to $122 at one point before drifting back to $116 on news of more Chinese Covid-19 lockdowns. The EU discussed following America’s lead and imposing a ban on Russian oil imports but Germany is reluctant as Russia supplies over a third of its requirements. OPEC meets this Thursday and may release further emergency reserves but it is difficult to see how OPEC could make up any supply shortfall to Europe. Concern about an already tight oil market was not helped by a series of attacks on Saudi Arabian refining facilities by Yemen Houthi rebels.

Finally, the Moscow stock exchange has partially re-opened after nearly a month-long suspension following the invasion of Ukraine. Russian bond yields spiked before settling around 13% following buying by Russia’s central bank. Meanwhile, sanctions appear to be hitting the Russian population  with reports of rationing of some staple foods – and prices of these, including sugar have jumped by 14% in a week. Perhaps not so sweet for Putin?