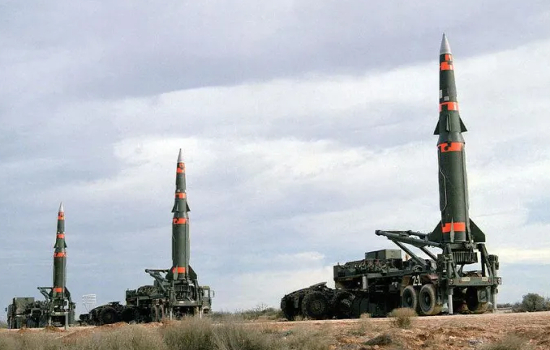 The US and Russia have suspended a crucial nuclear weapon ban raising the spectre of another Cold War. The Intermediate-range Nuclear Forces or INF Treaty, prohibits the production or testing of ground-launched missiles with a range of up to 3,400 miles. The INF Treaty has kept nuclear-tipped cruise missiles off the European continent for over 30 years.

The US military has proposed diversifying its nuclear arsenal and developing new, smaller atomic bombs, largely to counter Russia. The Pentagon appears concerned that Moscow sees US nuclear weapons as too big to be used – meaning they are no longer an effective deterrent. Pentagon officials say that this will give America ‘more flexible capabilities to give tailored deterrence’. The proposed tactical nukes, with a strength below 20 kilotons, would not increase America’s nuclear arsenal but would involve the re-purposing of existing warheads. Russia has said it is planning to develop new land-based missiles within the next two years. The Russian Defence Minister said ‘the Russian president has set the task for the ministry of defence for tit-for-tat mirrored measures’.

Is this another sign of President Trump’s America First policy? Clearly, the world remains a dangerous place and the White House is closely watching both North Korea and Iran. However, could this be yet another sign of US concerns about the growth of the new super-power in the Pacific region- China?

Let’s hope the US and China can agree a trade deal in the months ahead. Meanwhile, President Trump still has the EU and car tariffs on his radar screen. If Trump doesn’t get his border wall or trade deals, then expect him to go ballistic on Twitter!

A quieter but more cautious week for global investors with Chinese markets closed for ‘Year of the Pig’ celebrations. There was no fresh tangible US/China trade news. To remind everyone, the US and China have until 1st March to agree a deal otherwise the US will increase tariff rates on $200bn of Chinese goods from 10% to 25%. However, markets were uneasy due to comments from the Trump administration that a deal with China may not be reached by the March deadline. Some major issues are still to be resolved such as intellectual property transfers and state-owned enterprise subsidies. In addition to the China trade situation, there is also the outstanding issue of car tariffs with the EU which Trump wants addressed. Meanwhile, both the UK and Eurozone saw the economic growth outlook for 2019 lowered.

PM Theresa May visited Northern Ireland before heading to Brussels to discuss the Irish backstop.  She then met Jean-Claude Juncker, the European Commission President who stressed the Withdrawal Agreement could not be changed, but said the EU was open to adding words to the non-binding future relations document that goes with it. The two leaders agreed to meet for further talks before the end of February.

In the UK, service sector activity stagnated in January with new orders dropping for the first time in more than 2 years. Car sales dropped for the fifth-month in a row as demand for diesel vehicles continued to slump. The Bank of England cut its growth outlook for the UK economy from 1.7% to 1.2% citing the slowdown in growth towards the end of 2018 and the ‘fog of Brexit’.

In Europe, business activity has started 2019 on a flat note, with growth close to stagnation in January which saw the weakest Purchasing Managers’ Index data since mid-2013. What started as a manufacturing and export-led slowdown appears to have infected the services sector. The European Commission cut its EU economic growth outlook for 2019 and 2020 from 1.9% and 1.8% to 1.5% and 1.7% respectively.

In the US, President Trump gave his State of the Union speech in which he urged both parties to unite for his infrastructure plan, said Americans pay too much for prescription drugs and that China has targeted US industries and stolen intellectual property for years and wants Congress to pass reciprocal tariff legislation. The risk of another US government shutdown has not gone away.

India’s central bank unexpectedly cut interest rates by 0.25% to 6.25%, as it shifted its monetary stance to neutral from calibrated tightening. The Reserve Bank of India is forecasting the Indian economy will grow by 7.4% this year.

Brent oil settled at $61. Media reports suggested Saudi Arabia and its Persian Gulf allies are considering backing a formal relationship with a 10-nation group of non-OPEC oil producers, led by Russia, to provide greater stability in the oil market, given the growth of US shale oil output.

Finally, another reason to be wary of crypto-currencies? Canadian crypto exchange QuadrigaCX says it cannot repay £105m in client holdings after its 30-year old founder died suddenly while in India. Apparently, he was the only one who knew the passwords and recovery key to the exchange’s systems!