Has The Day After Tomorrow Arrived? 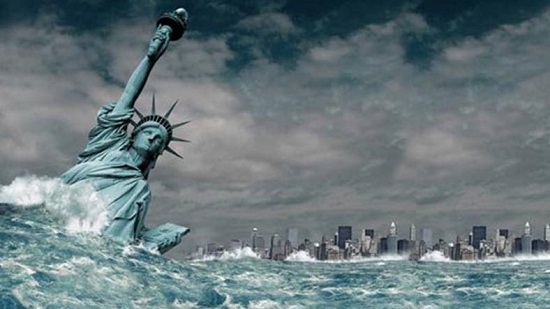 The 2004 disaster movie ‘The Day After Tomorrow’ depicts catastrophic disruption to the North Atlantic Ocean circulation. A series of weather events brings about extreme global cooling and leads to a new ice age. Disturbingly, a recent study published in Nature Climate Change has noted that the Atlantic Meridional Overturning Circulation has slowed due to climate change. While not necessarily heralding a new Ice Age, this could cool the Northern Hemisphere and decrease rainfall over Europe.

Europe has recently suffered its highest ever temperature. Temperatures in Sicily were recorded to have nearly reached 49°C or 120°F.

Is it too late to reverse global warming?

President Xi Jinping has said China will ‘phase down’ coal power generation from 2026. However, far from shutting coal-fired power stations, China is currently building new ones at more than sixty locations across the country. Furthermore, China has also financed coal-fired power stations outside the country through its Belt and Road Initiative. China is still reliant on fossil fuels.

While we can all do our bit to help the planet, it is the climate policies of the major carbon emission producers and particularly China, that matters to us all.

Markets continued to focus on the spread of the Delta variant particularly in China which could see economic growth slow as some question the efficiency of locally developed vaccines. This comes at a time when investors have become more concerned about the impact of greater regulation with a further announcement by the Chinese authorities covering a review of more sectors.  Investors also continued to look for guidance from the US Federal Reserve (Fed) on tapering guidance following the recent strong jobs numbers although the latest inflation data was not the hand grenade as feared. Despite Covid-19 uncertainty and the Fed inching towards tapering, a number of markets touched record highs including the US S&P 500 and UK mid-cap helped by continued takeover activity.

Company results continue to highlight global supply chain and freight cost issues. According to latest reports, there are currently 363 container ships stuck outside ports waiting for a berth. That is more than double the number from earlier in the year. China’s second-biggest container port was forced to suspend operations due to China’s zero-tolerance virus policy, after a single port worker tested positive for Covid-19. Clearly, there is massive pent-up consumer demand as more parts of the world exit lockdown but can manufacturers get the goods to the buyers?  Meanwhile, the global shortage of semi-conductor chips may stretch into 2023 according to Germany’s biggest chipmaker Infineon Technologies as new capacity will take time to come on stream.

In the UK, consumer spending received an additional boost from major sporting events in July and as Covid-19 restrictions were eased further. Almost 90% of UK adults have now had a first jab and almost 76% two jabs. The BRC reported retail sales growth of 6.4% while Barclaycard’s consumer spending measure showed volumes up by 11.6%. The UK economy grew by 4.8% in the second quarter of 2021 compared with the first quarter as the service sector eased out of lockdown. June was the fifth consecutive month of economic growth. Business investment was up by 2.4% but is more than 15% below pre-pandemic levels. Looking to the third quarter, the biggest question mark remains employment once the furlough scheme fully ends in September.

In the US, two more Federal Reserve (Fed) officials suggested the possibility of a more imminent interest rate hike. Both appear to believe that inflation has achieved the 2% threshold set by the Fed while the other requirement, maximum employment, is on track to reach target by October. This would allow the Fed to begin tapering its QE programme before the end of 2021. The July headline CPI reading at 5.4% provided ammunition for both sides of the US inflation debate. Some transitory influences such as second-hand car prices have moderated but food and energy prices have increased again. The US Senate passed President Joe Biden’s $1trillion infrastructure bill which now goes to the House of Representatives where the Democrats have a thin majority.

In Japan, wholesale prices increased by 5.6% in July, the fastest pace in thirteen years. However, there is uncertainty on whether Japanese companies will start to pass on higher raw material costs to households with consumer inflation still close to zero due to weak consumption.

China’s State Council and the Communist Party’s Central Committee unveiled tighter regulation for a number of ‘important fields’ such as science and technological innovation, culture and science. The 10-point plan which runs to the end of 2025 will seek to tackle ‘monopolies and foreign related rule of law’ while China’s digital economy including internet finance, artificial intelligence, big data and cloud computing will also be reviewed. Meanwhile, Chinese economic data was below market expectations and both industrial output and retail sales slowed sharply in July. This may reinforce expectations of more easing in H2.

Brent oil held at $69 as Libya’s output fell due to a pipeline leak. President Joe Biden has called upon OPEC+ to further increase output given the rise in US gasoline prices.  Meanwhile, the International Energy Agency (IEA) estimates oil demand fell in July in China, India and other parts of Asia due to the rapid spread of the Delta variant. The IEA has cut its oil demand forecast by 500,000 barrels a day for the second half of 2021.

Finally, while focusing upon climate change. Siemens Gamesa is to double the size of its wind turbine blade facility in Hull to create 200 new jobs aided by a £160m grant from the government. The blades are being supplied to the Hornsea Two project off the Yorkshire coast – the world’s largest offshore wind power plant capable of powering 1.3million homes.