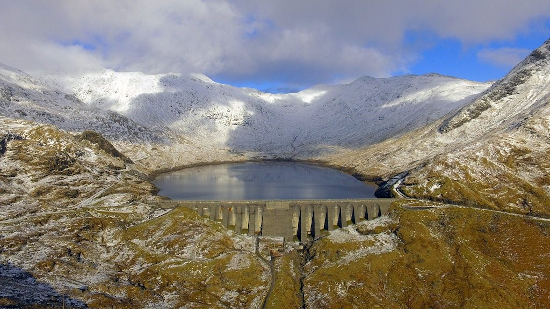 Recent global developments highlight the importance of energy security. The recently published British Energy Security Strategy, states it is “the lifeblood of the global economy”.

Boris’ ‘Ten-point plan for a green industrial revolution’ highlights the need to accelerate the shift from fossil fuels to renewables. After all the debate about offshore wind and nuclear power, it is nice to see a ‘no brainer’ renewable energy project proposal in the UK. Energy provider Drax is proposing to expand its ‘Hollow Mountain’ hydro storage power station. This is located inside Ben Cruachan, Argyll’s highest mountain. It is one of only four hydro storage plants in the UK.

The capacity of the current Cruachan Power Station is 400 megawatt (MW) – enough to power 90,000 homes and Cruachan 2 will add a further 600 MW so increasing the site’s capacity to 1 gigawatt. The new power station will be built within a new, hollowed-out cavern by excavating 2 million tonnes of rock, creating a second cavern next to the existing one – large enough to fit Big Ben on its side! The new power plant, if approved, could be operational as soon as 2030, assuming construction started in 2024 and the existing upper reservoir, which holds up to 2.4 billion gallons of water, has the capacity to serve both power stations.

While the 90,000 homes powered by the existing Cruachan Power Station does not sound a lot, hydro-power is vital to the security of the National Grid. This is because pumped storage provides extremely quick back-up during periods of excess demand. Cruachan can ramp up to full power in about 30 seconds.

While we all welcome the use of renewables such a wind and solar, similarly we all want to switch the kettle on at half time during the football or Coronation Street. Whether it’s manufacturing, working in an office or WFH, the UK will need reliable energy 24-7, not just when the wind blows or sun shines. The growing use of electric vehicles will only add to the UK’s energy requirements in the years ahead.  The government needs to stay on top of energy policy, otherwise the cost-of-living crisis will only get worse.

Without wishing to sound like a broken record – the war in Ukraine, Chinese lockdowns and inflation continued to focus minds.

The US market dropped sharply following a profit warning from retailer Target, which saw its biggest share price fall since the 1987 crash. US retail stocks were sold off on concerns about consumer spending and an inflationary squeeze on their profit margins.

Western military sources say that President Putin is now directly involved in the day-to-day running of the war in Ukraine, taking decisions normally made by junior officers. Ukraine’s military says Russia is continuing its offensive in the east of the country and is focusing its main efforts on Donetsk. Meanwhile, Turkey’s president Erdogan suggested he could block Finland and Sweden’s applications to join NATO, accusing them of harbouring terrorists – Kurdish militants.

The UK government intends to introduce legislation to make changes to the Northern Ireland protocol in the coming weeks, but says its preference is an agreement with the EU and remains open to further talks.

UK inflation hit a 40-year high in April with CPI at 9%. The Bank of England (BoE) is forecasting CPI inflation to go above 10% in the fourth quarter when the energy cap comes into place. Alarmingly for the BoE, the latest data shows that the broadening of inflationary pressures is continuing. Wages failed to keep pace with rising prices in the first quarter of 2022, with pay excluding bonuses rising by 4.2%. Job vacancies swelled to 1.3 million and there were actually fewer unemployed people than job vacancies for the first time since records began. The jobs data is not painting a picture of an economy about to hit the wall, but the consumer squeeze isn’t ending anytime soon. Recessions are typically triggered by a drop in confidence and while consumers are under increasing pressure, so far there has not been a significant change in business confidence.

The EU slashed its economic growth outlook and raised its inflation expectations. Economic growth has been cut for 2022 and 2023 from 4% and 2.7% to 2.7% and 2.3% respectively. Inflation has been revised upwards from 3.5% and 1.7% to 6.1% and 2.7% respectively. The war in Ukraine is the key reason with the conflict exacerbating supply chain disruption and rising input costs. ECB officials are expected to back at least two 25bp rate increases, with markets pricing in the possibility of up to four moves this year.

In the US, April retail sales data was good, but this was more than countered by a profit warning from retailer Target. While revenue was good, reflecting inflationary price increases, sales volumes have started to weaken while cost input pressures are hitting profit margins. US manufacturing production exceeded expectations in April. Jerome Powell, Chair of the Federal Reserve (Fed), said he wouldn’t hesitate to act and raise interest rates faster if inflation fails to fall. He wants to see ‘clear and convincing’ evidence that inflation is falling. Could we be back to another ‘bonkers’ period for markets where good economic news is bad news for investors?

Saudi Arabia said it expects to ramp up oil production by more than 1 million barrels a day to over 13 million barrels by early 2027. Meanwhile, Brent oil held around $108.

Finally, as highlighted in last week’s Alpha Bites, the governor of the Bank of England speaking at a Treasury Select Committee apologised for sounding ‘apocalyptic’, but has warned of ‘a very big income shock’ from the increase in global food prices with the warning Ukraine would affect food supplies. Central banks are accused of being behind the curve on tackling inflation and surging food prices will give them plenty to digest.

Read Last Week’s Alpha Bites – Could we all be Hank Marvin? *