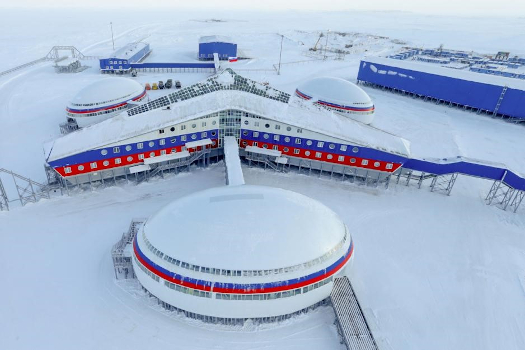 Russia has again been flexing its muscles, this time to challenge for control of the Arctic. The Russian Northern Fleet put on a show of strength earlier this year when three nuclear submarines smashed through the ice simultaneously at the North Pole while two fighter jets flew overhead, re-fuelling in mid-air on the same Arctic exercise. Such posturing, which is reminiscent of the 1968 film ‘Ice Station Zebra’, has made the US and NATO wary as Russia’s military presence in the region expands to a level not seen since the Cold War.

Russia’s latest strategic move in the region is the Nagurskoye military base on Alexandra Island in Franz Josef land, less than 600 miles from the North pole and a 2-hour flight from Murmansk. The base has 150 soldiers and Bastion anti-ship missile launchers. Russia is re-building its presence in the region, which was abandoned when the Soviet Union fell apart. The military investment appears to mostly be refurbishing old Cold War era bases and bringing in modern equipment. However, the move is not just about self-defence.

Global warming will make it easier to navigate in the region and Russia appears to be seeking to develop and control the waters while there are believed to be significant oil and gas reserves beneath the sea.

The US has once again accused Moscow of ‘militarising’ the Arctic, stating recent activity is seen as ‘provocative’. Russia is sending a clear message about its ambitions in the Arctic and its interests that it’s ready to defend.

While the US has been focusing upon China’s growing naval power in the South China Sea it is a reminder that Russia also has ambitions, but in another part of the globe. President Biden is to meet President Putin for a summit on June 16th in Switzerland. I wonder if ‘Ice Station Zebra’ will be part of the in-flight entertainment on Air Force One?

Inflation remains a focus for markets. Central bankers are sticking to the ‘transitory inflation’ message but more companies are alluding to short-term inflationary pressures and are taking mitigating actions to protect profit margins. Some sectors are also starting to highlight labour shortages in the US. Meanwhile, good progress on vaccination continues to counter concerns about Covid-19 variants although another more transmissible mutation has been identified in Vietnam.

Relations between the US and China show no sign of improving following American media reports over the origins of the Covid-19 outbreak. According to a previously undisclosed US intelligence report, three researchers from the Wuhan Institute of Virology fell ill and were admitted to hospital in November 2019, well ahead of the outbreak being officially recognised. China has dismissed the claim. President Joe Biden has ordered US intelligence agencies to report to him in the next three months on whether the Covid-19 virus first emerged in China from an animal source or from a laboratory accident.

Meanwhile, trade officials from the US and China have had ‘candid, pragmatic’ talks as the Biden administration scrutinises whether Beijing is holding up its end of the trading pact agreed with former President Donald Trump. Some industry experts believe China has fallen as much as 40% short on its agreement to buy American manufactured goods.

The US warned its citizens not to travel to the Olympic Games in Japan citing the growing risk from Covid-19. The US has criticised Japan for its slow vaccination programme with just 2% of its population of 125million having had two doses despite starting in February. By comparison, half of all American adults have received two doses. The UK has also made good progress with vaccination and almost 75% of the adult population has now received a first jab with 48.5% having received two doses. However, scientists are still raising concerns about the Indian variant ahead of the government’s decision day on 14th June ahead of full easing of lockdown on 21st June. Will enough of us be fully vaccinated to allow full exit from lockdown? Meanwhile, Vietnam, which was very successful in dealing with the original Covid-19 outbreak has seen a spike in infections and has had to introduce fresh lockdown measures after the discovery of a new variant – a mutation of that seen in India and the UK that appears to be more transmissible in the air.

The UK’s borrowing figures continue to set unwanted records, but the trend is definitely improving. The final public debt figure for 2020/21 was revised to £300bn, the highest since records began in 1946. However, April’s borrowing was £31.7bn compared with £47.3bn in the same month last year, reflecting the gradual re-opening of the economy.

In the US, the latest consumer confidence survey showed consumers’ short-term optimism waning, mainly driven by rising inflation expectations. Meanwhile President Joe Biden is proposing a rise to $6trillion annual government spending. That would increase the US deficit to $1.3trillion. To be fair this plan is aspirational and a culmination of everything else he has said so far. The US Federal Reserve has government borrowing rising to 117% of GDP by 2031.

China’s Renminbi hit a three -year high against the US Dollar reflecting China’s economic re-bound from Covid-19 and capital inflows. Meanwhile the sky-high price of iron ore is unhelpful for Chinese inflation and is raising the cost of stimulus construction work causing the government to re-evaluate some infrastructure projects. China’s May Caixin PMI manufacturing activity indicator rose to its highest level this year at 62.0.

Brent oil moved up to $70 helped by market expectations that fuel demand globally is rising with the re-opening of major economies in Europe and a pick-up in air travel in the US.

Finally, financial regulators do not yet believe that crypto-currencies are a big enough systemic financial risk but a hedge fund manager has pointed out to us that if all crypto-currencies were one stock that it would be the fifth largest in the world, in between Amazon and Alphabet. If, as some believe, crypto-currencies are worthless then the combined destruction of value would be more than double the Lehman Brothers hit in 2009 and up to 25 times bigger than the Enron scandal in 2001!