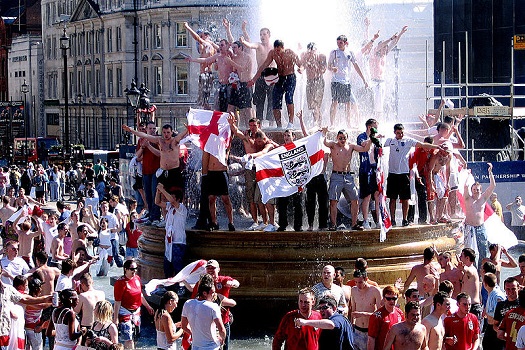 Aside from the football, the weather is the Nation’s major talking point.

Over the weekend, many parts of the UK experienced exceptionally heavy rainfall and flash flooding. This was almost akin to tropical conditions, thereby dashing a few BBQ’s and outdoor celebrations.

The northern jet stream* is a key determinant of Britain’s weather. In winter, there is more of a temperature difference between the equator and the North Pole, so the jet stream tends to be stronger and flows over the UK. The reverse is true in the summer, where there tends to be a smaller temperature difference. The position of the jet stream typically ends up north of the UK which tends to see calmer, drier weather. However, due to climate change the jet stream appears to be shifting and weakening. This, risks creating more extreme localised weather events particularly the risk of flooding in the UK. Bad news for your staycation. Meanwhile, parts of the US and Canada are experiencing an extreme heatwave.

Extreme weather events are a further sign of climate change, making their intensity and possibility even more likely.

After the global Covid-19 storm, stock markets have benefited from favourable jet stream tailwinds in the form of massive government stimulus and support from the central banks with QE. Inflation has jumped as the world re-awakens but central bankers are adamant that this is ‘transitory.’ While markets have enjoyed the central bank QE tailwind, it is possible that they could be buffeted about once central banks start to taper bond purchases. It might not just be the weather that becomes more un-predictable in the future.

The end of the second quarter saw most global equity markets still on an upward path, despite a flatter month. However, the ’Great Rotation’ paused last month with a shift from value back towards growth stocks and the US S&P index boosted by technology companies back to a record high. This may possibly be due to the spread of the Delta variant and investors acceptance of the message from central banks that current inflation is transitory.

The spread of the Covid-19 Delta variant across parts of Asia caught the attention of global markets last week. Hong Kong banned all incoming flights from the UK over concerns about the Delta variant. Meanwhile, nearly half of Australia’s population, some 12million people are now in lockdown as the nation struggles to contain outbreaks of the Delta variant.  In the US, health experts warned the Delta variant could cause ‘dense’ outbreaks in those US states that have relatively low vaccination rates. The fight between vaccines and Covid-19 variants will continue. The latest variant of concern for the WHO is the lambda variant first identified in Peru. This has an unusual set of mutations, is far more infectious and has already spread to over thirty countries with cases already identified in the UK.

In the UK, good progress is being made with mass vaccination with over 85% of adults having had one jab and over 62% two jabs but the same is not true globally. Even in the UK, cases of the Delta variant have jumped significantly but due to double vaccination, hospital admissions are much lower than in previous waves. The Government is set to provide guidance this week, ahead of England exiting lockdown on 19th July.

Geo-political tensions were also noticeable last week. Some 200 US businesses were hit by a colossal ransomware attack, believed to be the Russia-linked REvil criminal gang. A Florida based IT provider, Kayesa, was attacked and the virus spread through corporate networks using its software. This even spread to Europe with the Swedish Co-op forced to close 500 stores as self-service tills stopped working. The cyber-attack follows the recent meeting between Presidents Biden and Putin in Geneva, during which the Russian leader was told he had a responsibility to rein in such attacks. Meanwhile, in China, at the centenary of the ruling Communist Party, President Xi Jinping said China was determined to bring Taiwan under its control.

The ‘transitory’ inflation debate continues. In the US, one contributing short-term factor adding to inflation is the price of used cars which have jumped by 30%. This is due to long lead times for new vehicles due to delays caused by semi-conductor and logistical issues such as port congestion. Americans are also buying used petrol cars while they wait for the next generation of more reasonably priced EVs.

In the UK, Covid-19 support for businesses has started to be withdrawn even though the exit from full lockdown is unlikely before 19th July. Some 1.5million people are still on furlough. Nationwide said house prices rose by 13.4% in the year to June, the fastest pace since 2004.

The European Central Bank (ECB) remains the major central bank furthest away from winding down monetary policy support but some of the more ‘hawkish’ policy members are already laying the groundwork for a discussion of tapering. Two ECB council members have suggested some of the supportive measures will not be required in 2022. Eurozone ’flash’ headline inflation remained at 1.9% in June, below the ECB’s target.

US consumer confidence recovered to a post-pandemic high reflecting a pick-up in the jobs market.

Japan’s retail sales grew for a third straight month in May, with an increase of over 8%.

China’s official PMI business activity indicators for June edged lower with manufacturing still in expansion territory with a reading of 50.9 but flat on May. China is in the middle of a huge power shortage as extreme weather, surging demand and stricter limits on the use of coal has delivered a triple blow to its electricity grid. Guangdong province-responsible for 10% of China’s economic output, has been on power rationing for a month. Some local authorities have warned power rationing could last until the end of the year. China’s latest manufacturing PMI data may reflect the power supply situation, compounded by a shortage of semi-conductor chips.

Brent oil was steady at $76. The OPEC+ meeting is due to reconvene this week, having failed to reach a new agreement on relaxing production cuts later in the summer. The UAE is objecting to the current Saudi-led proposals, suggesting the baseline output references should be re-assessed.

Finally, Scotland Yard recently seized £114m of Bitcoin while investigating a tip off about criminal assets. Last week, the world’s biggest crypto-currency exchange Binance, was banned from undertaking any ‘regulated activities’ in the UK by the FCA. Crypto-currencies appear to be losing their shine.

*The jet stream was discovered by accident in World War II by American B-29 bomber crews attacking Japan when bomb-aimers couldn’t fix their bomb sights on the target some 30,000 feet below as the aircraft overshot due to tailwinds of up to 125mph. The Japanese military were aware of the jet stream and used it to carry Fu-Go balloon bombs over the Pacific Ocean to attack the west coast of America. Today, the jet streams, one in the northern hemisphere and one in the south, are tracked and studied by meteorologists and are extremely important for the aviation industry, not only in cutting time off flights but, saving fuel as well.